Crusader Kings III is out!  Actually it’s been out for a while, the first expansion was just released, but I’ve been a little busy.  Now that I’ve finally gotten a chance to dig into it and lose a few times while I get the hang of some of the new mechanics, we can have a game for public consumption!

If you haven’t read any of my previous CK stuff, here’s an overview.  Crusader Kings is a dynasty simulator set mostly in Europe, covering 867 AD to 1453 AD.  You choose a start date and a character to play as from among the ruling nobility, and govern your realm as best you can.  When your character dies, if you have an heir who still controls some land, you play as them and keep going.  If your dynasty dies out or you lose all power, it’s game over.  It’s a game that really encourages you to get into the mindset of a medieval baron — claims, religion, and succession are incredibly important, and inevitably you end paying off your bishop to force your failure of a son into a monastic order or similar amusing shenanigans.

There isn’t really a goal per se, though you get a score based on your dynasty’s power and prestige.  I like to start each playthrough with a vague direction I intend to take the game, although sometimes I get derailed along the way.  In past games, I’ve rebuilt the nation of Israel, become a fearless Viking, and re-established the Roman Empire.  This time I’m going to recreate a game I tried in CK2 with only moderate success and try to create a Scots crusader state.

So rough goals are:

Before we get started, as usual, I offer the following caveat: the game refers to various historical people, places, religions, etc and I write these with a bit of a roleplaying flair, so please don’t take any references to e.g. setting Christians on fire at all literally.

Okay!  First things first.  How do we go about being Scots?

Well, the first problem is that in 867 AD there are no Scots, as CK defines them.  Scots is a culture, a sub-group of Anglo-Saxon, which comes into existence randomly sometime before 1000 AD if there are any Anglo-Saxons within the borders of Scotland.  So step one is to pick an Anglo-Saxon ruler in the north of Britain! 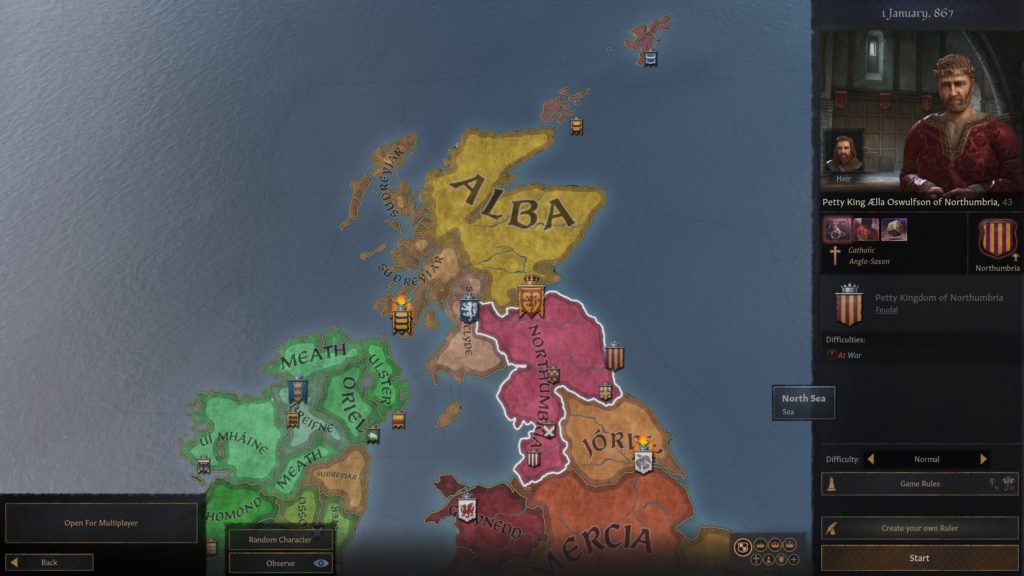 Well, it turns out we don’t have a ton of choice.  Ælla Oswulfson of Northumbria is a Petty King (in CK-world, a Duke-level title) and he’s surrounded by non-Anglo-Saxons.  Alba is still Gaelic, Strathclyde is Welsh, and Jórvik and Suðreyjar are Norse Viking states.  So Ælla it is!

People who know a lot of British history are wincing.  It turns out that Ælla was a real person back in 867, and is most famous for, um, getting horribly killed by the sons of Ragnar Loðbrók.  In fairness he had supposedly chucked their dad into a pit of snakes, which would make anyone up for some invading.  So we’re going to be trying to change the course of history here right away.

And man, is it not easy. 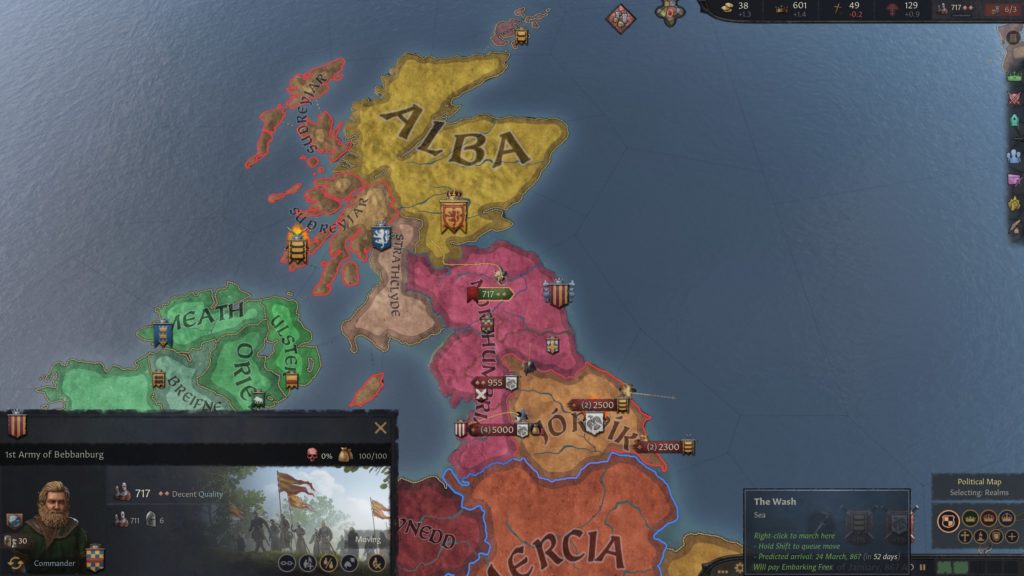 The Vikings have what in technical military terms we might call a ****ing gigantic army.  See, in CK realms generate troops according to the buildings and such that are constructed in them, so my smallish realm of Northumbria can muster only 717 brave men.  To represent unusual invasions, the game generates special “event” armies that just appear out of nowhere so historical conquerors can do their thing.  Since the start date is right when the Vikings attack Northumbria, we literally start the game with 10,000 angry Norsemen immediately marching into my territory to burn things down.  This seems bad.

So, what have we got to work with?  Not enough money to hire even the cheapest mercenary army.  Not enough piety to ask the Pope for help.  No likely allies. 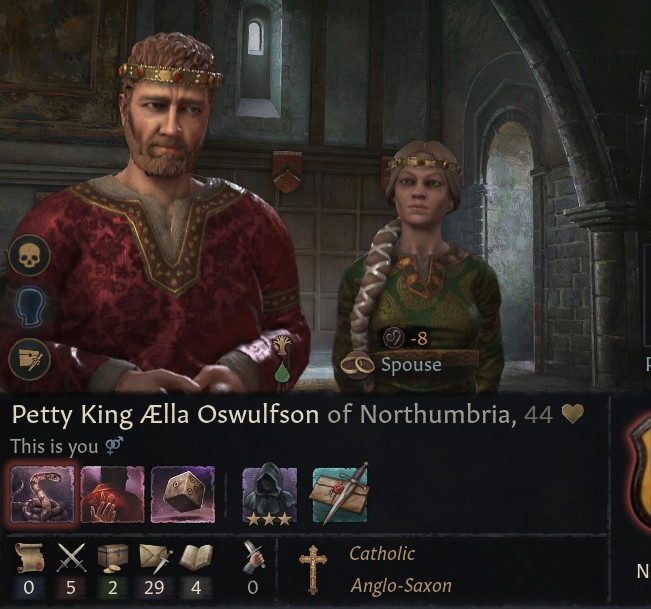 All I really have in my favor is that Ælla is sneaky as hell.  (Also deceitful, paranoid, and arbitrary.)  10 is a decent stat — my intrigue is a whopping 29, while have 2 stewardship and 0 diplomacy and personal prowess.  I can stab people in the back but definitely not in the front.

On the other side, I have Jarl Halfdan Whiteshirt from the south and Jarl Ivar the Boneless from the north, each claiming half my kingdom, each with an event army of 5,000 plus their usual troops.  So my first trick is to try to murder one of them — I pick Halfdan because it’s more likely to succeed.  Murder schemes take a while, though, so my castles are rapidly falling … 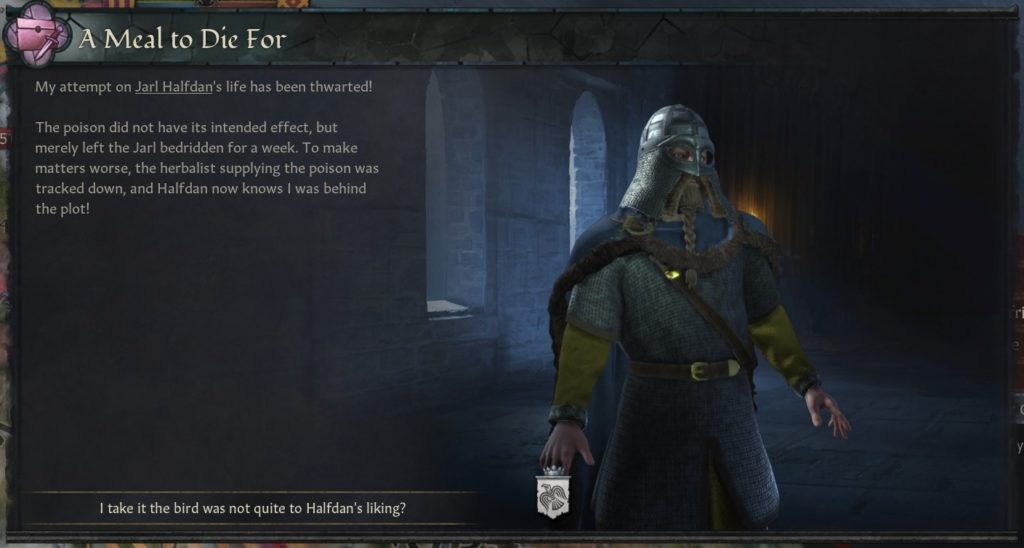 Well, crap.  So close and yet so far.  And the disasters keep coming. 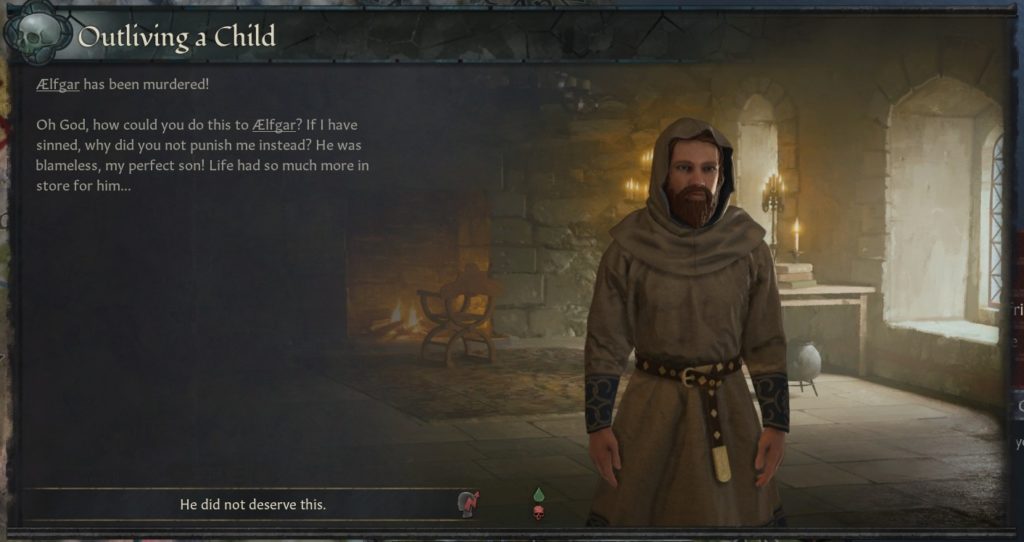 My son has been “murdered” in the sense of “died fighting a gigantic horde of Vikings because I forgot to prevent him from personally joining the army.”  I guess if anyone is the murderer it’s me.  This is quite bad, but there’s a lot on my mind at the moment.

In a tactic that will no doubt be a mainstay of this playthrough, I go with “let’s distract the bad guys”.  While the Vikings are busy burning down my castles, my little army gets aboard ships and sails over to Suðreyjar and starts besieging their castles.  This tends to cause the Viking armies to hurry back to stop me, at which point I run away.  In CK2, this tactic was effective bordering on broken because of how quick and easy it was to take ship and escape, but CK3 has made it more fair — boarding ships costs gold and takes a long time.  So I end up losing a battle to the Vikings (in which my son dies) but I keep them off me for a while. 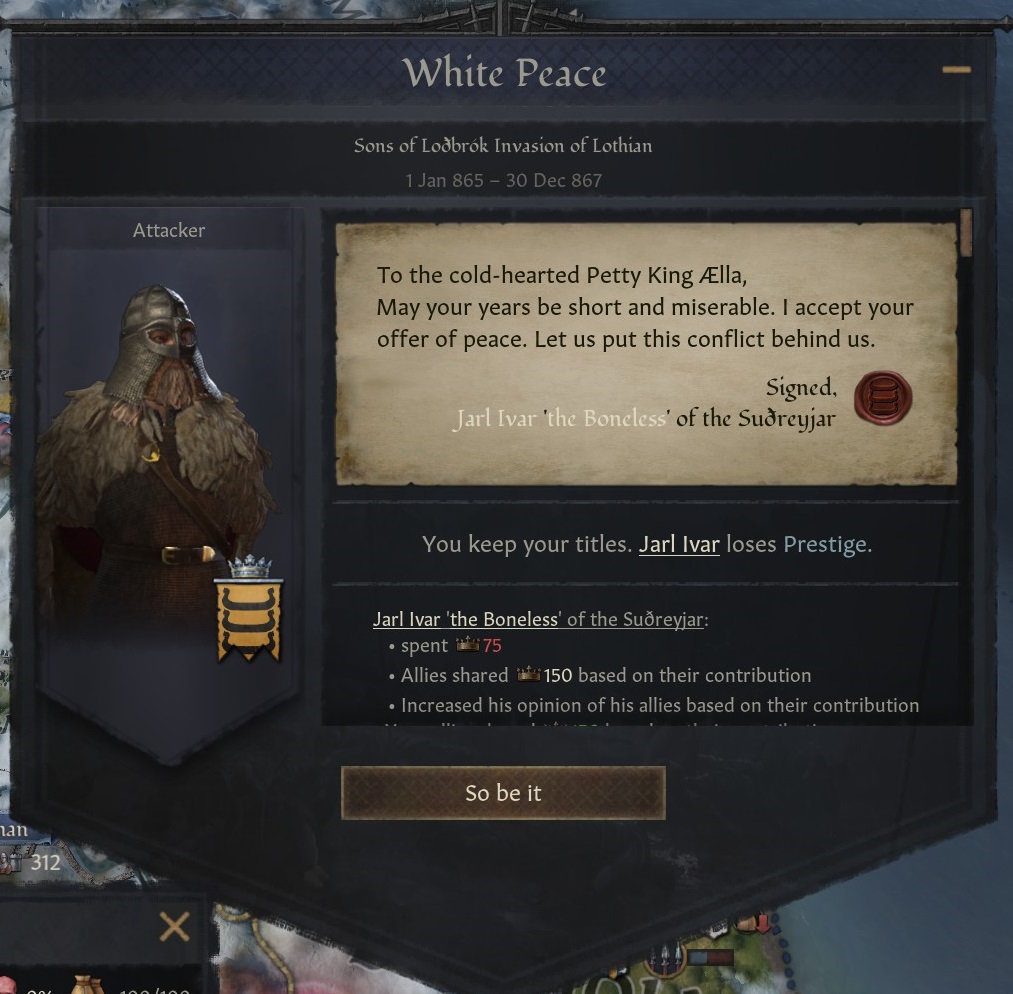 This turns out to make all the difference.  The two Viking armies were working together in the south of Northumbria, and I managed to distract Jarl Ivar’s forces, until the length of the war and the fact that he hadn’t taken any of his targets in the north half of my kingdom meant he was willing to call a truce.  Jarl Halfdan seizes the southern half of Northumbria, but I manage to hang on to five counties around Lothian.  So … that’s something. 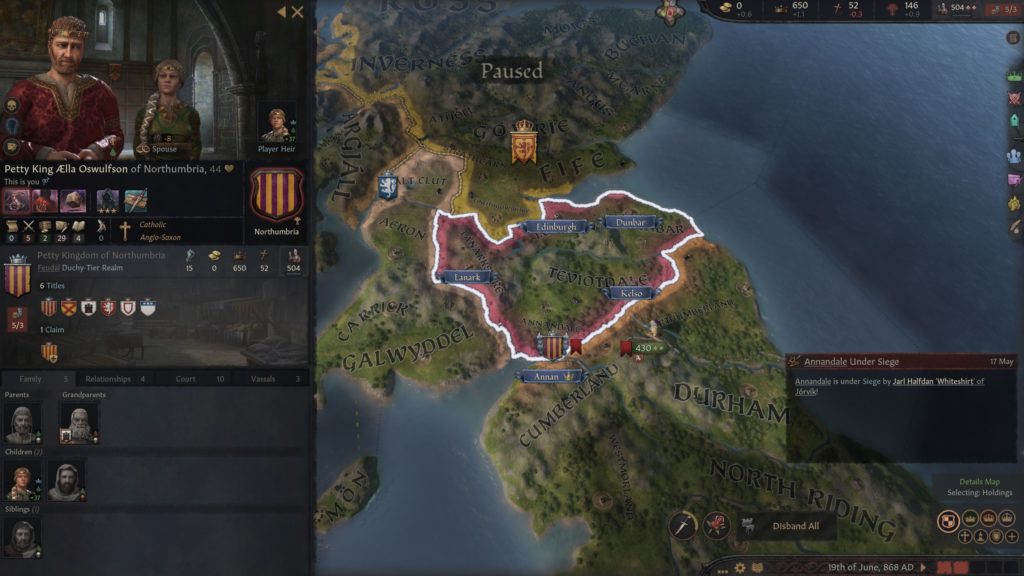 At least my newly shrunken realm will be easy to keep track of?  I now have a ten-year truce with the two Vikings, but that’s not long at all, and they still have most of their giant event armies.  I have to hope they go to war with other people and use those up.  My goal at this point is just to survive until those event troops die off and the Viking impetus is spent, and then try and get off the back foot.  First, though, I have another problem. 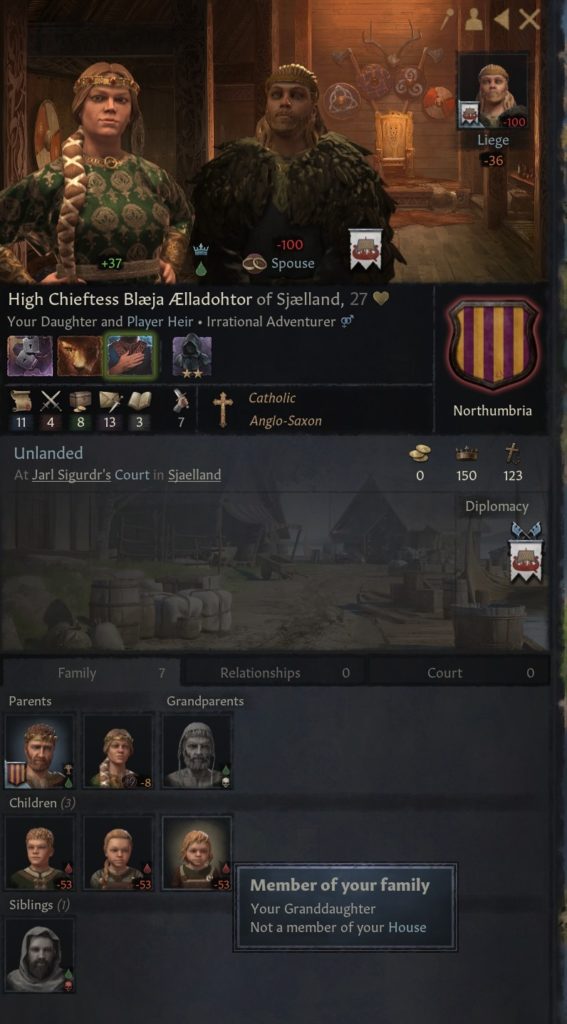 Ælla started with an adult son (who had no children) and a daughter.  With my son dead, Blæja here is my heir.  Unfortunately, Blæja was married before the game started and has three children.  You can marry your daughters off “matrilineally”, a somewhat ahistorical concept that means their children will be part of the mother’s dynasty instead of the father’s, but I didn’t have the chance to do that.  So when Ælla dies, I’ll play as Blæja.  But when she dies all my titles will pass to her children, who are not members of my dynasty, which means game over.

I have to fix this now, because as Blæja I won’t have the chance — any further children I have will be younger and farther down the line of succession.  Fortunately, we’re on bad old patriarchal agnatic-cognatic succession, which means that boys always come before girls, so I have a chance.  Basically Ælla needs to have another son or I’m screwed…