Last time, we finally became Scots!  Also, Ælla had a son to inherit, who had survived his childhood brush with typhus.  And he was plotting to kill his rival to the northwest, Sigfroþ, in the hopes of finally winning a war against literally anyone.

So let’s get on with that, shall we?  Come on, spider! 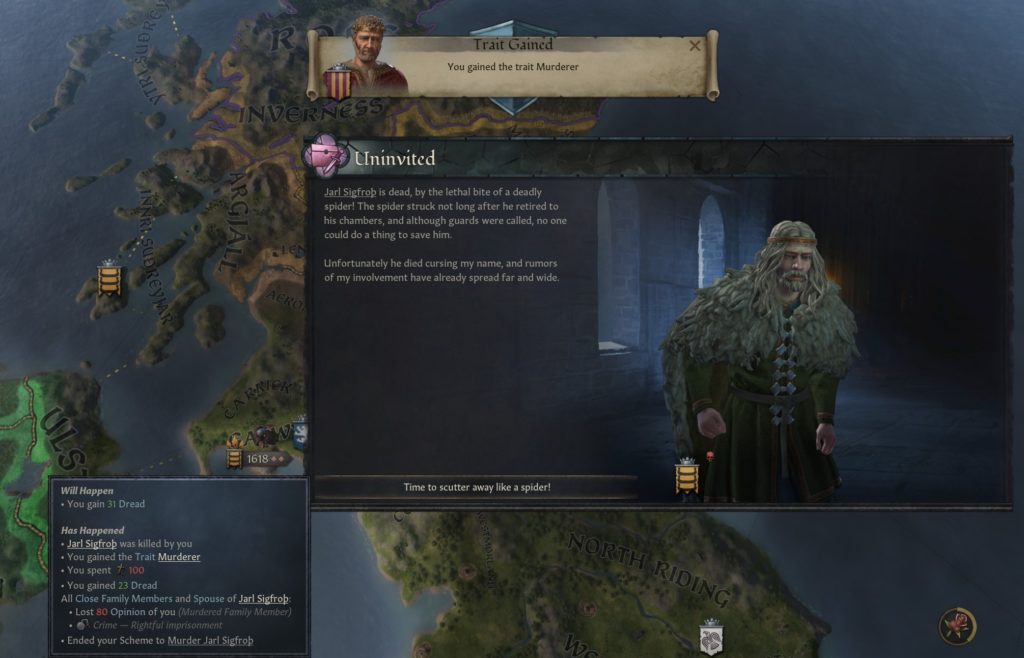 Yes!  Gaining the Murderer trait reminds me for all his scheming, Ælla has so far only managed attempted murder.  Good to finally go the distance.

Apparently “he died cursing my name” is enough for everyone to decide I’m guilty.  Viking courts are pretty basic.  “How do you know he’s the killer?”  “Well, the victim said ‘Screw that guy’ before dying, so it’s pretty black and white.” 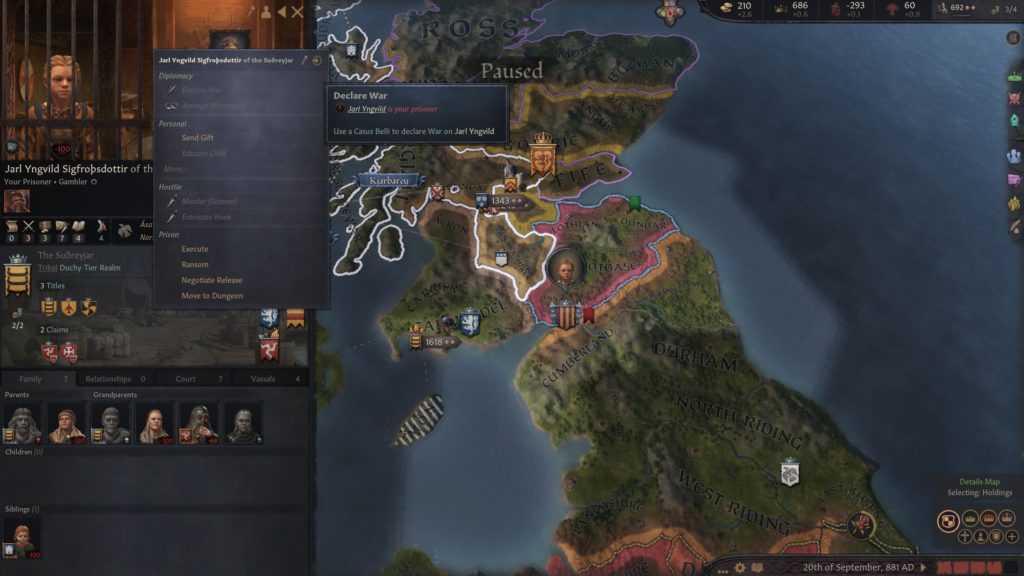 So it’s time to look into declaring war on Suðreyjar and taking back Lanarkshire.  You’d think this would be straightforward, since their Jarl is now in my custody, but there’s a few obstacles.  For some reason you aren’t actually allowed to declare war on someone when they’re in your dungeons!  Honestly it kind of seems like the ideal time. 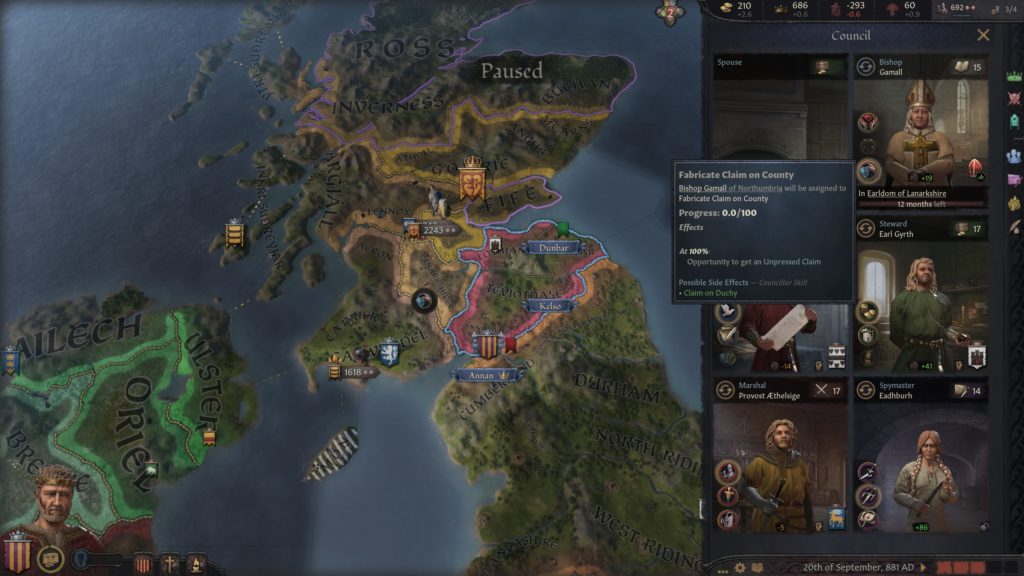 The other thing is I don’t seem to have a claim to Lanarkshire.  I’m not sure why this is, usually you get claims on land that gets taken from you.  Maybe because it was a Viking conquest?  Not sure.  Anyway, I need to “acquire” a claim to the land via “blatant forgery” first.  For some reason this is the province of the clergy, so I send my Bishop Gamall.  He probably has some spare time in between preaching and raising my son. 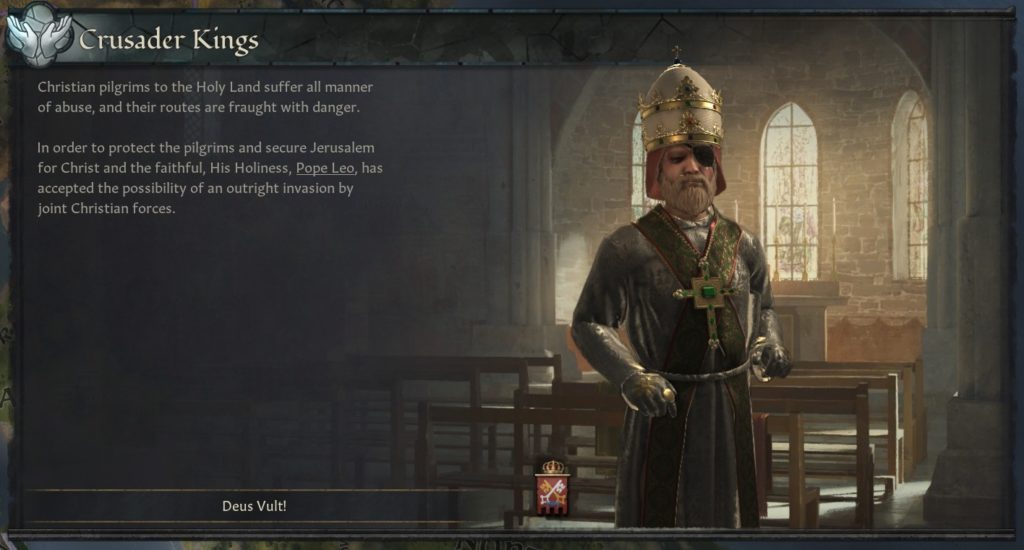 Meanwhile, events are afoot in the wider world. Someone must have done something over in the Holy Land, because this rather badass-looking Pope is pissed off. 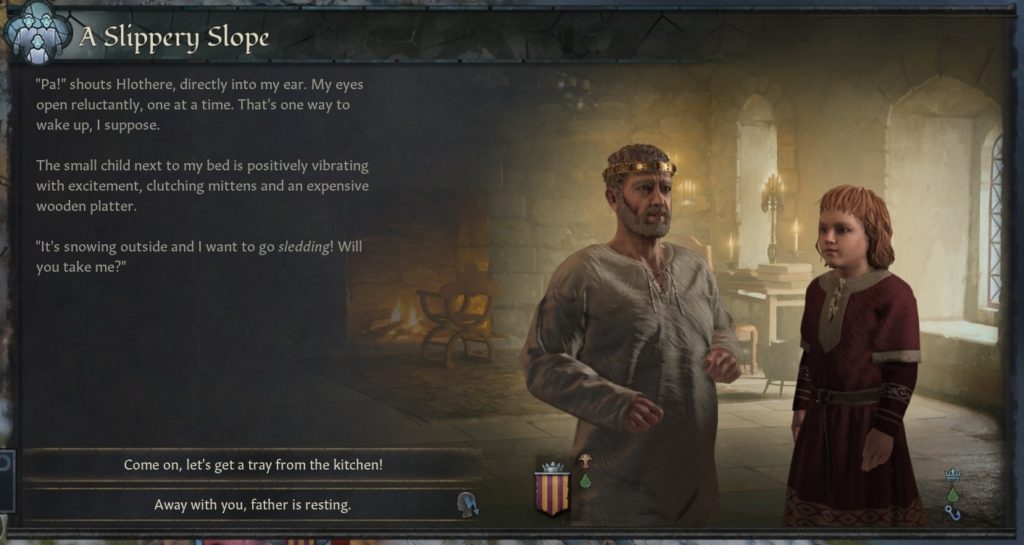 “Not now, son, His Holiness is ranting!” 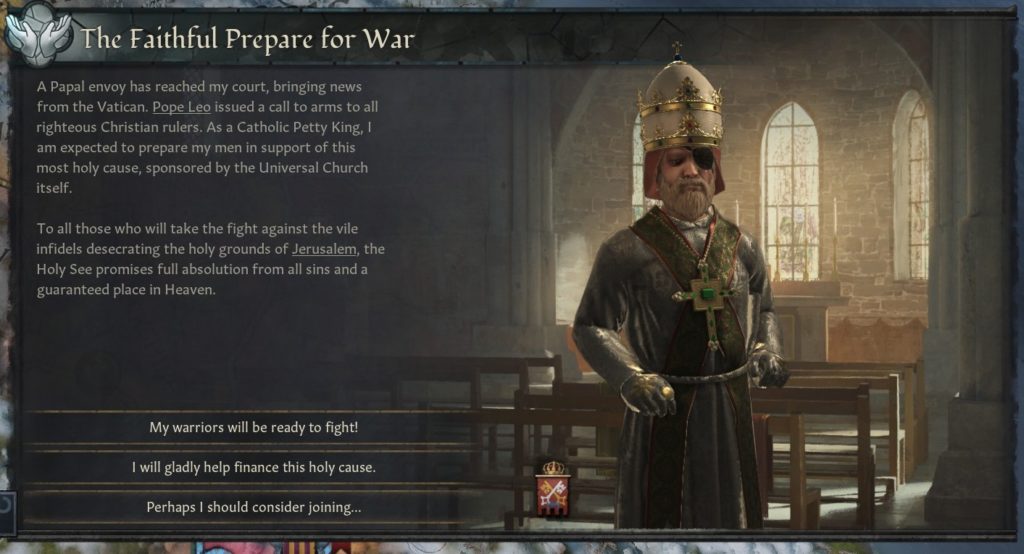 So we’re doing this, huh.  The pope wants either my gold or my soldiers, but I kind of need those for, you know.  All the Vikings.  I put him off with vague promises for the moment. 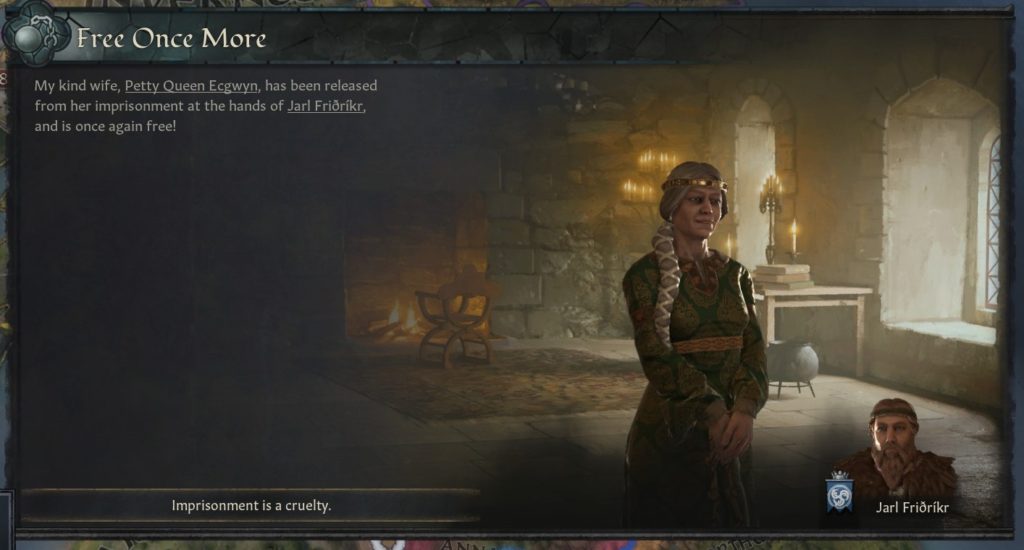 Speaking of Vikings, the Jarl who captured my wife eventually gives her back free of charge, possibly because he doesn’t like her any more than I do.

“See, honey?  I told you that if we waited long enough, we wouldn’t have to pay the ransom!” may be the ultimate Dad move. 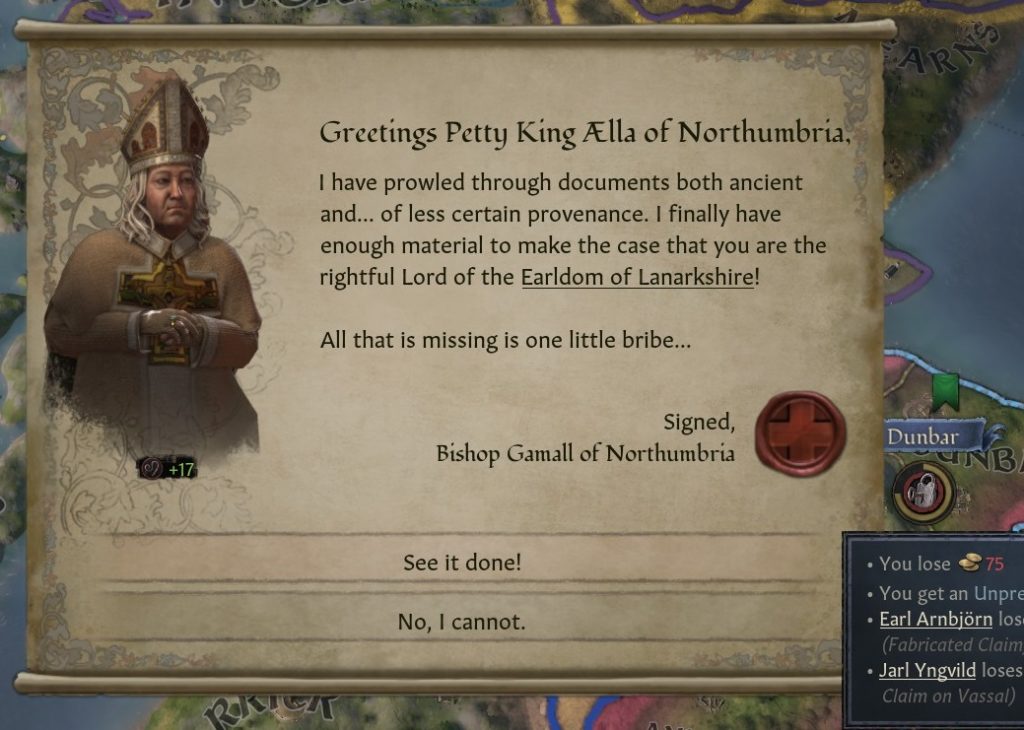 Besides, I need that cash for bribery!  Everyone will be totally convinced that I am lord.  Well, everyone except the Vikings.

I honestly have no idea who this guy is but apparently I’m glad he’s dead! Then things take a rather abrupt turn for the worse.  A band of 700 or so Viking raiders turns up and lays siege to my capital.  I only have about 500 soldiers of my own, so I hire a mercenary company to help dislodge them, but it takes a while to get the troops together.  Before we can, they’ve taken the castle and captured my son.  My army jumps them and wins the battle, but they get away with Hlothere.  Dammit. 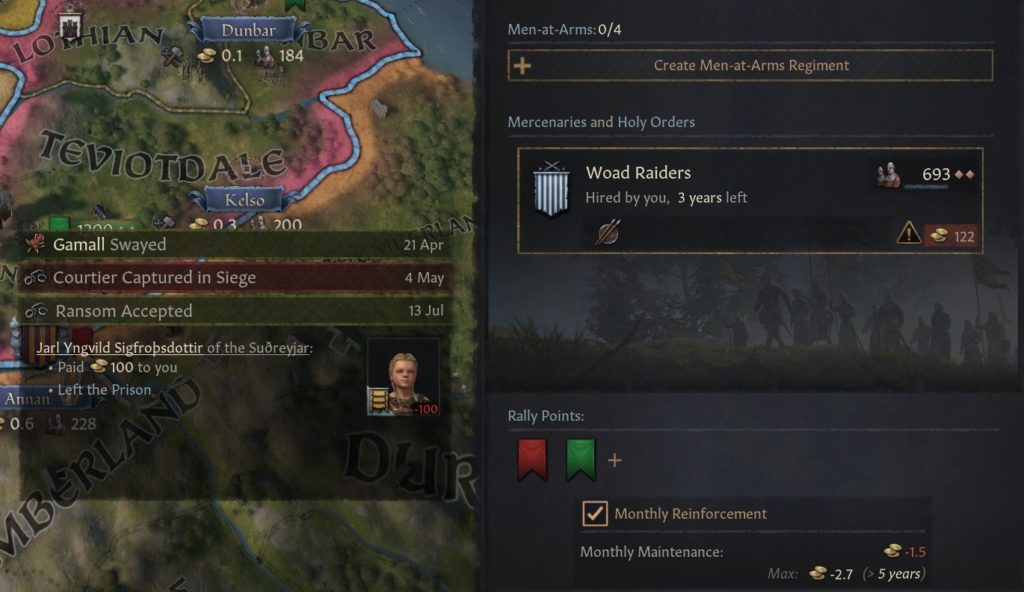 Step one is to ransom the prince, which costs a hundred gold, leaving me close to bankrupt.  But I’ve got these mercenaries on the payroll for three more years, so it seems like it would be a good idea to get my war started before then. 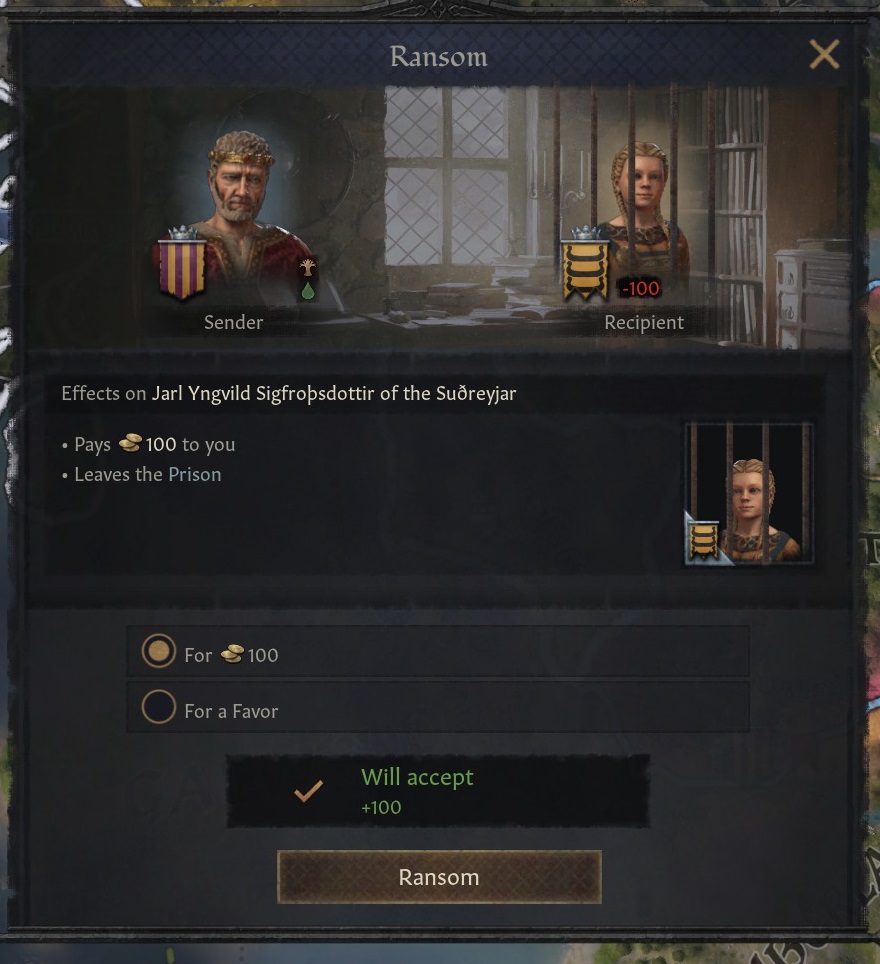 Step two is to ransom Yngvild.  Then, about the time she gets back to her court … 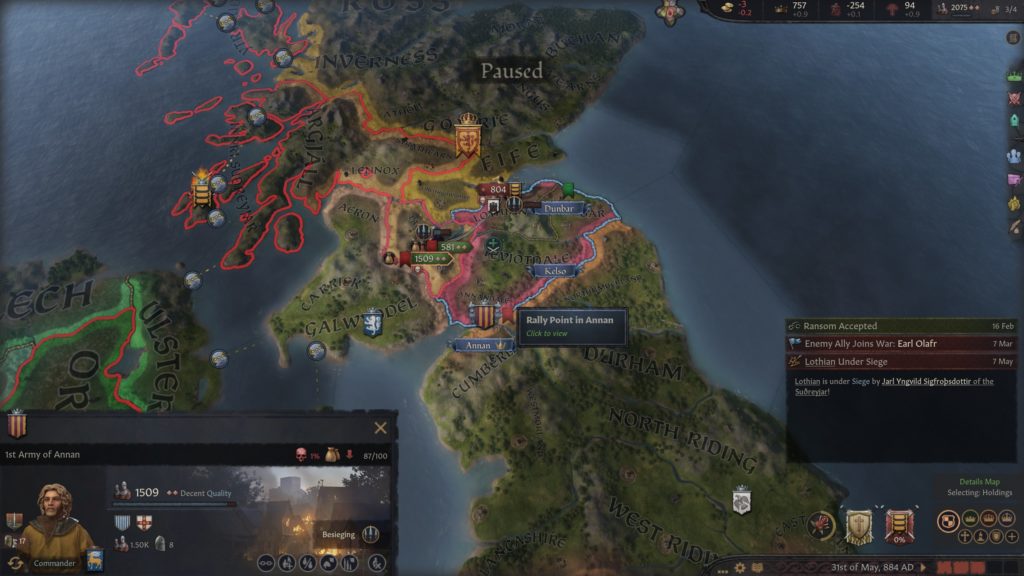 Step four is to use the money she paid for the ransom to hire a second mercenary company, giving me a comfortable superiority of numbers.  I lay siege to Lanark while chasing the enemy out of my land. 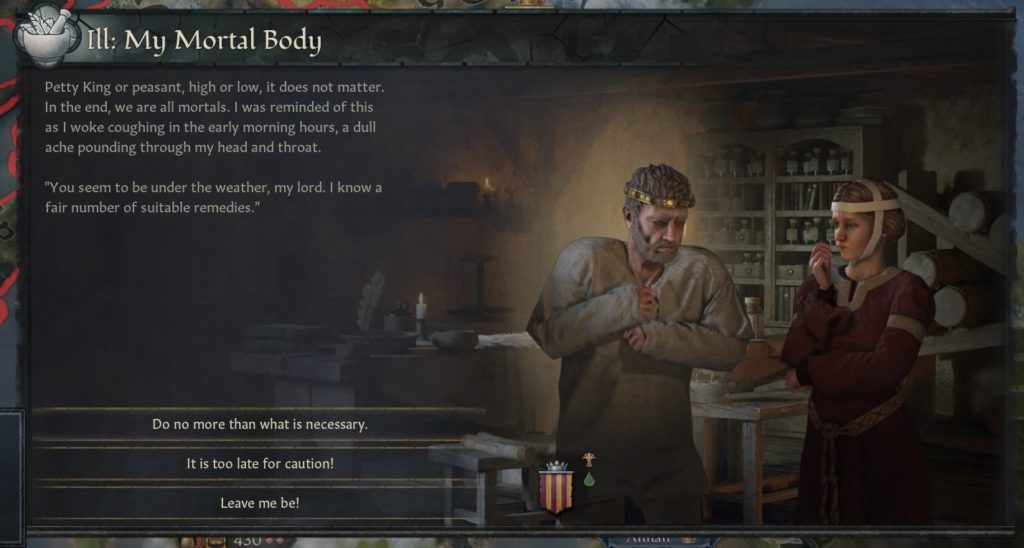 But suddenly Ælla is under the weather!  Save me, Doctor Lesbian! 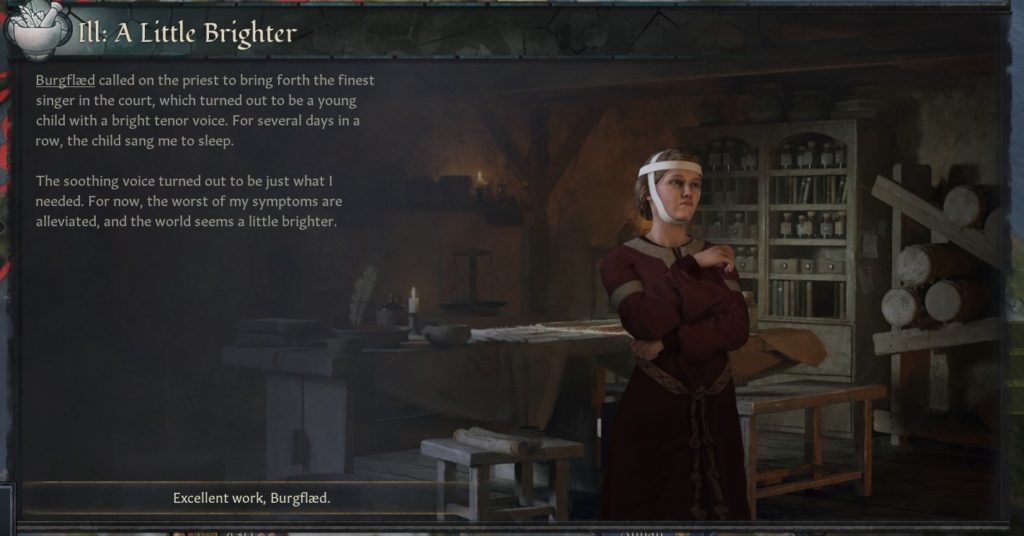 “Just put on a sweater over your filthy nightshirt, sire.”

*sigh*  “Okay.  Wear a sweater while … um … a golden-voiced child sings to balance your humors.” 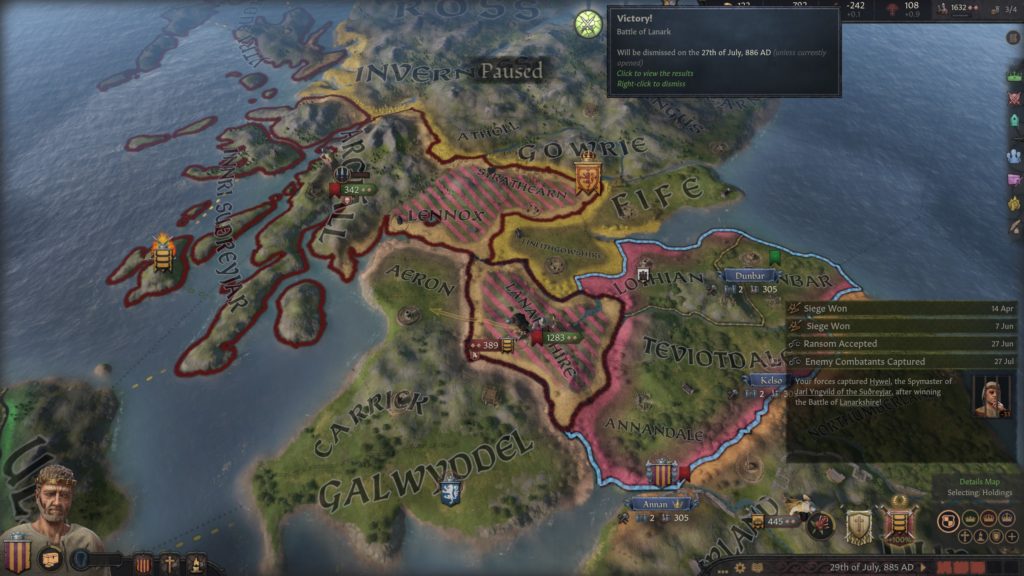 The Vikings try to sneak back to their castle, but I follow them and send them packing. 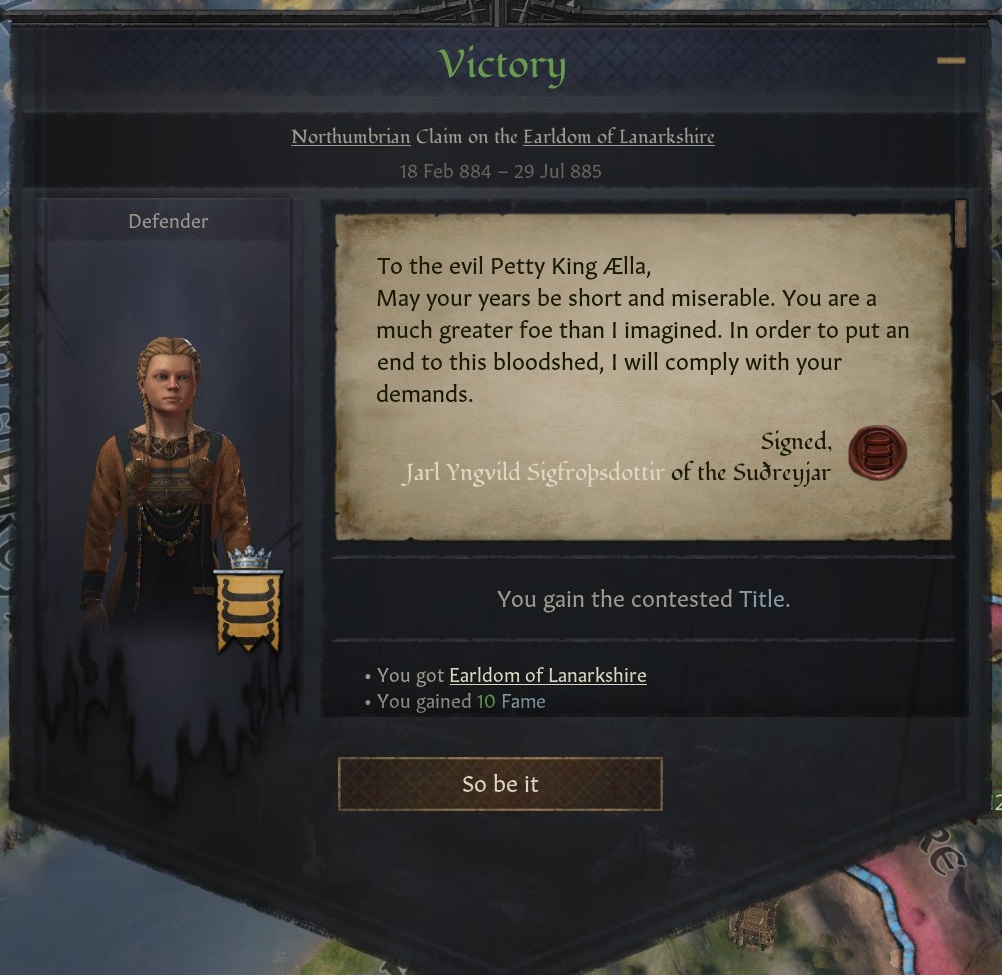 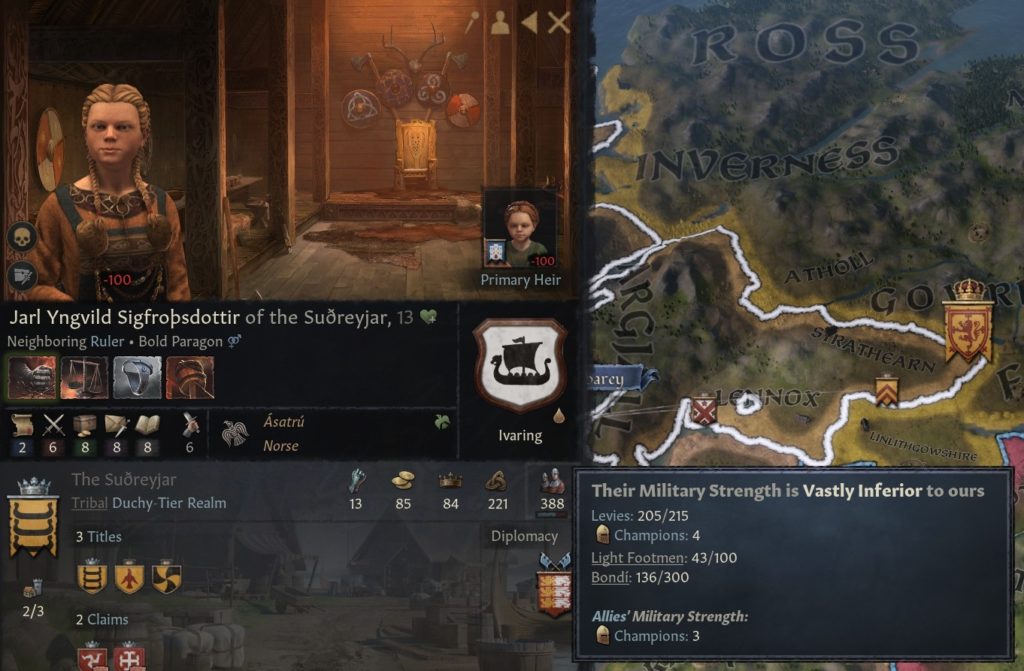 More than just getting a single county back (up to five again!) the destruction of their remaining event troops has broken the power of Suðreyjar for good.  I’m now quite a bit stronger than them, even without my mercenary buddies. 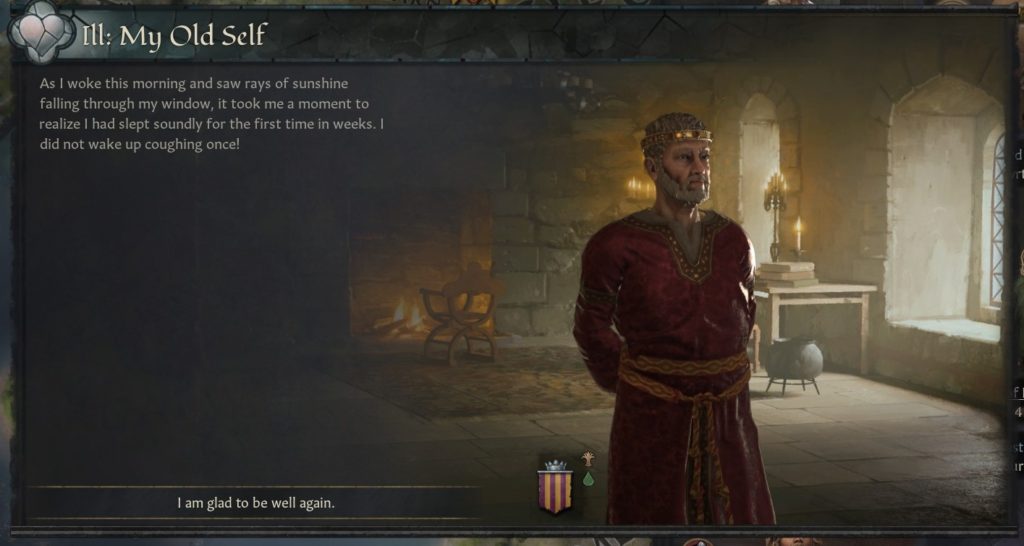 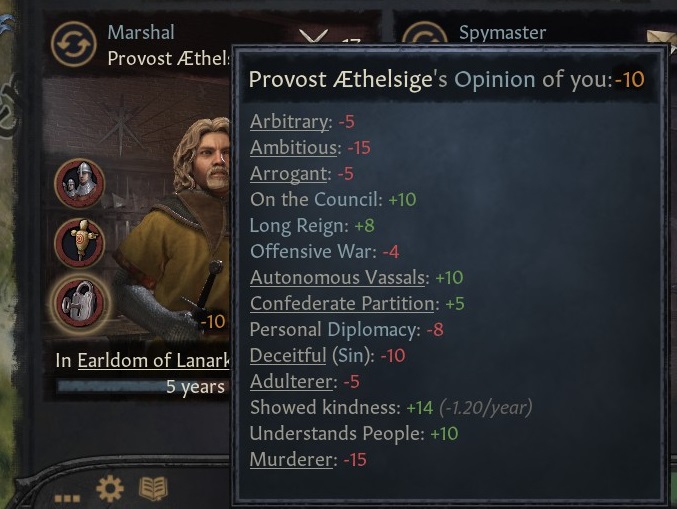 Even his own courtiers kind of hate him though.  In addition to his garbage diplomacy, he’s also arbitrary, ambitious, arrogant, and openly a murderer, liar, and adulterer.  That’s quite a record! 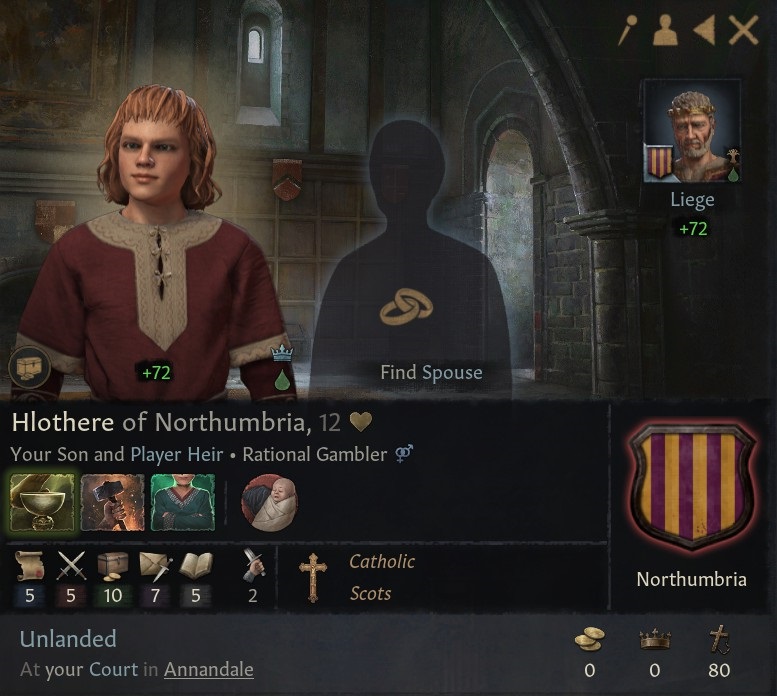 Hlothere, on the other hand, is turning out quite well.  He’s got generally decent stats and a pretty good stewardship even without finishing his education.  It’s getting close to time to find him a wife. 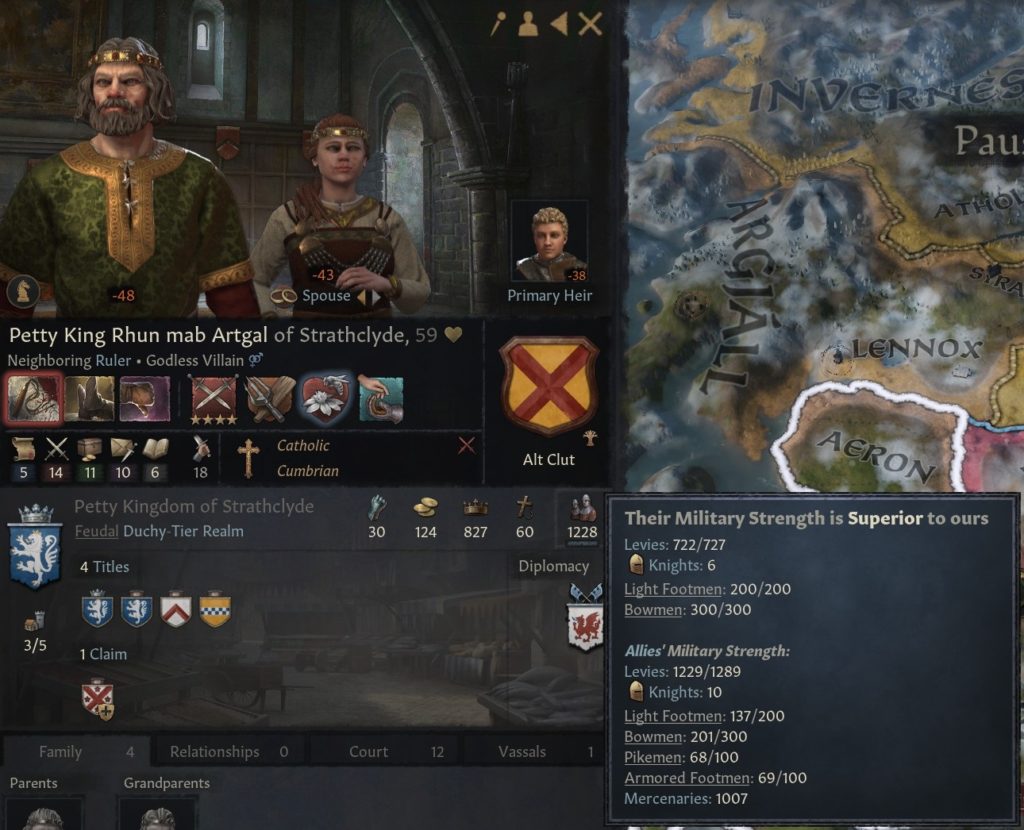 My neighbors in Strathclyde, while they have strong allies, are pretty weak themselves.  I start forging a claim on a chunk of adjacent land, in hopes of being able to expand a little further. 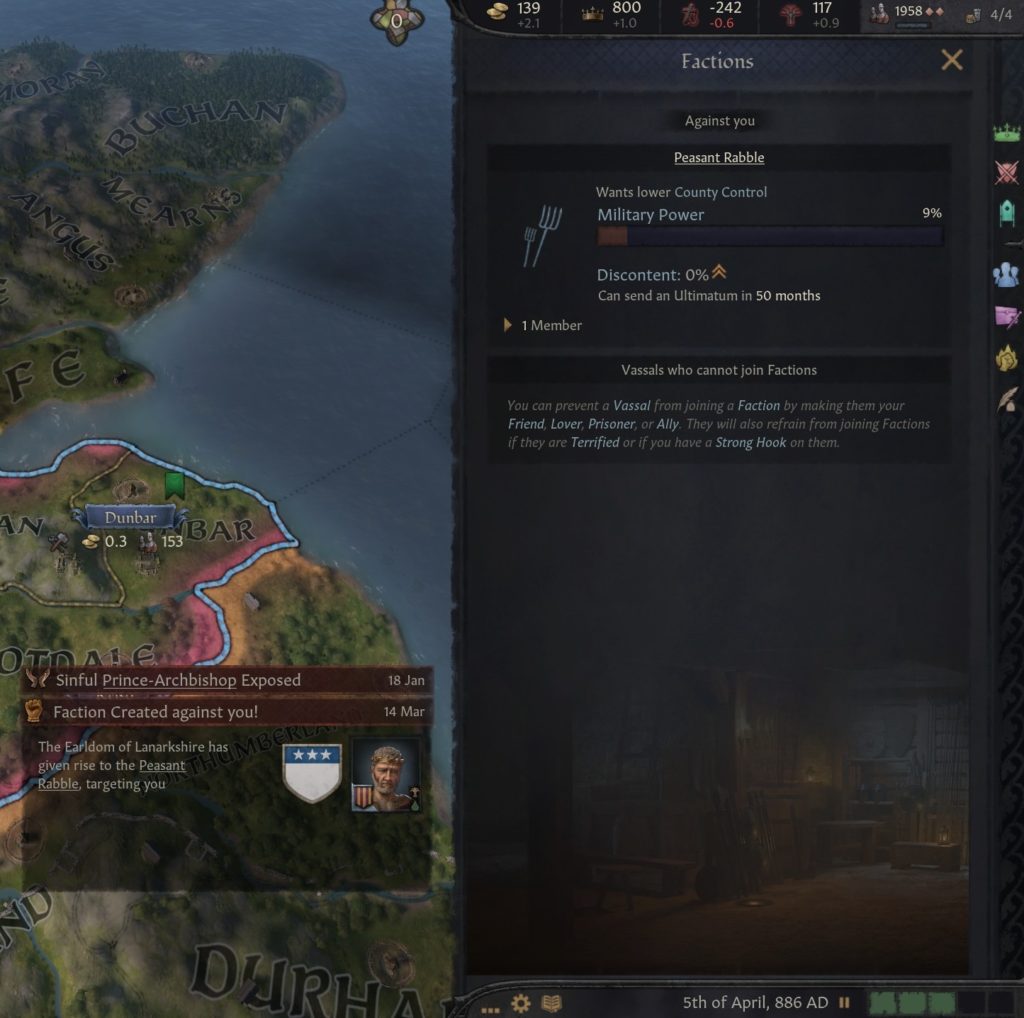 “The peasants are revolting, sire!” 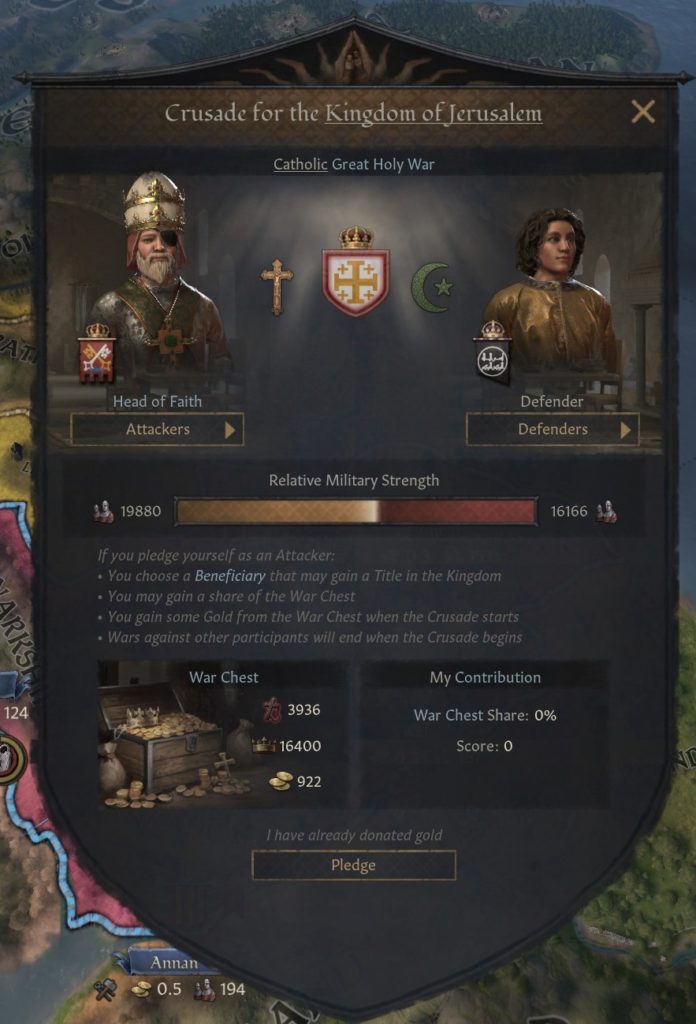 Meanwhile the Crusade is going … actually kind of well?  It’s going to take a while to forge my claim, and I have a truce against Suðreyjar, while Alba in the north and Jórvik in the south are too strong to attack.

So I send my army off to the Holy Land in hopes of securing a little loot and glory!  What could go wrong?

(Everything.  Everything could go wrong.) 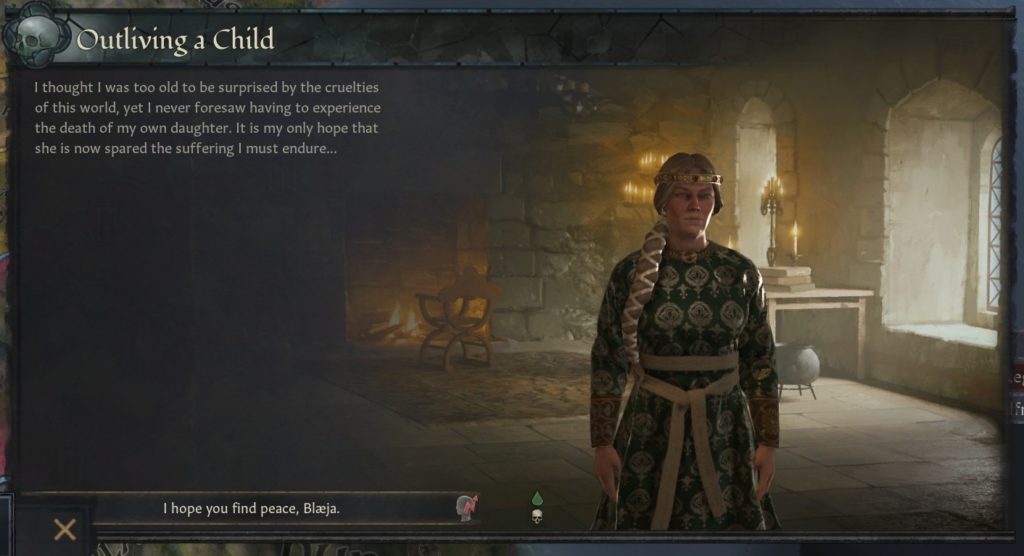 My disinherited daughter has died, apparently.  This increases my stress, although it’s actually good news as far as succession is concerned… 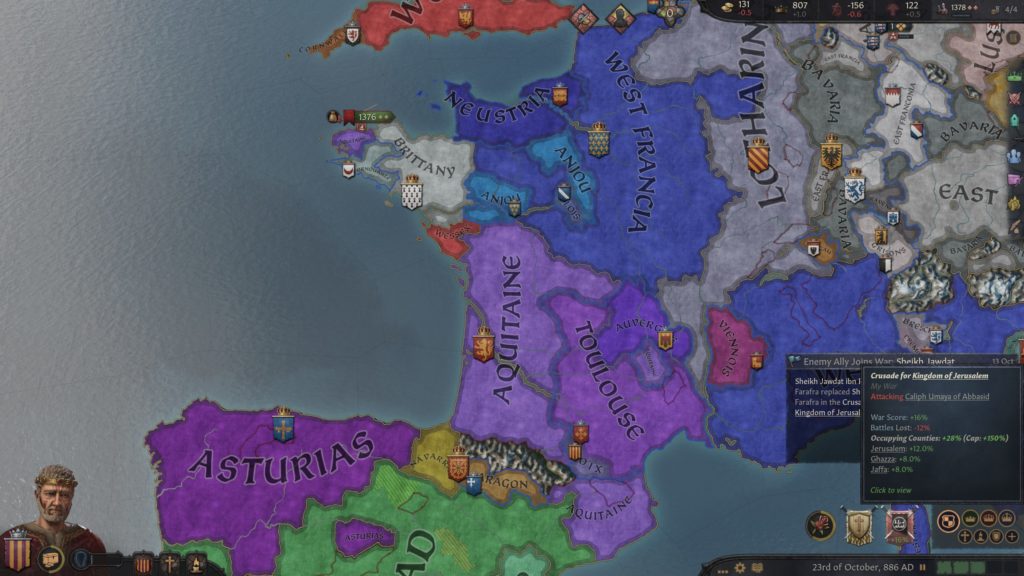 My brave little army (including my remaining mercenaries) heads south, past a France that seems to be pretty divided.  Nice colors though! 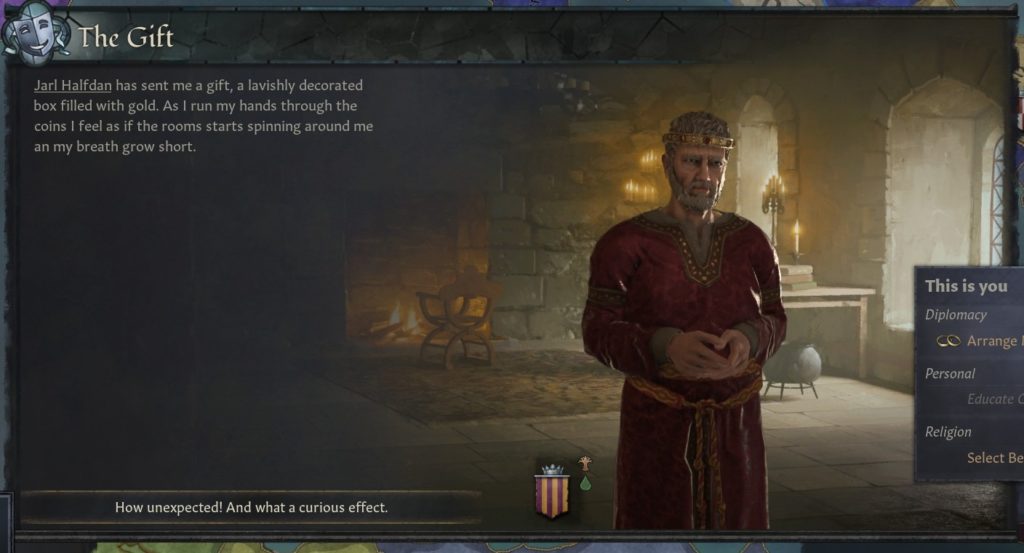 A gift, you say?  From my mortal enemy Jarl Halfdan?  Why, bring it in and let me get a good sniff! 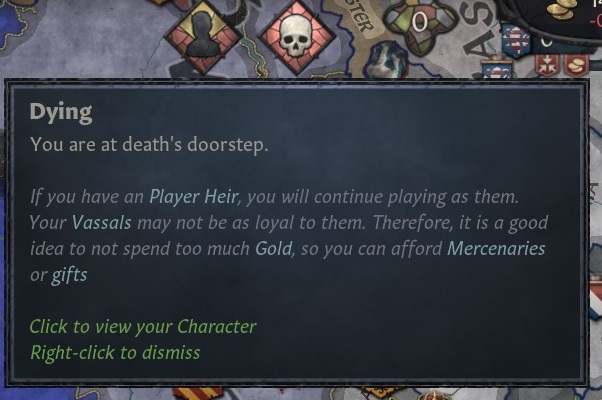 Hmm.  I’m no Doctor Lesbian, but this sounds bad. 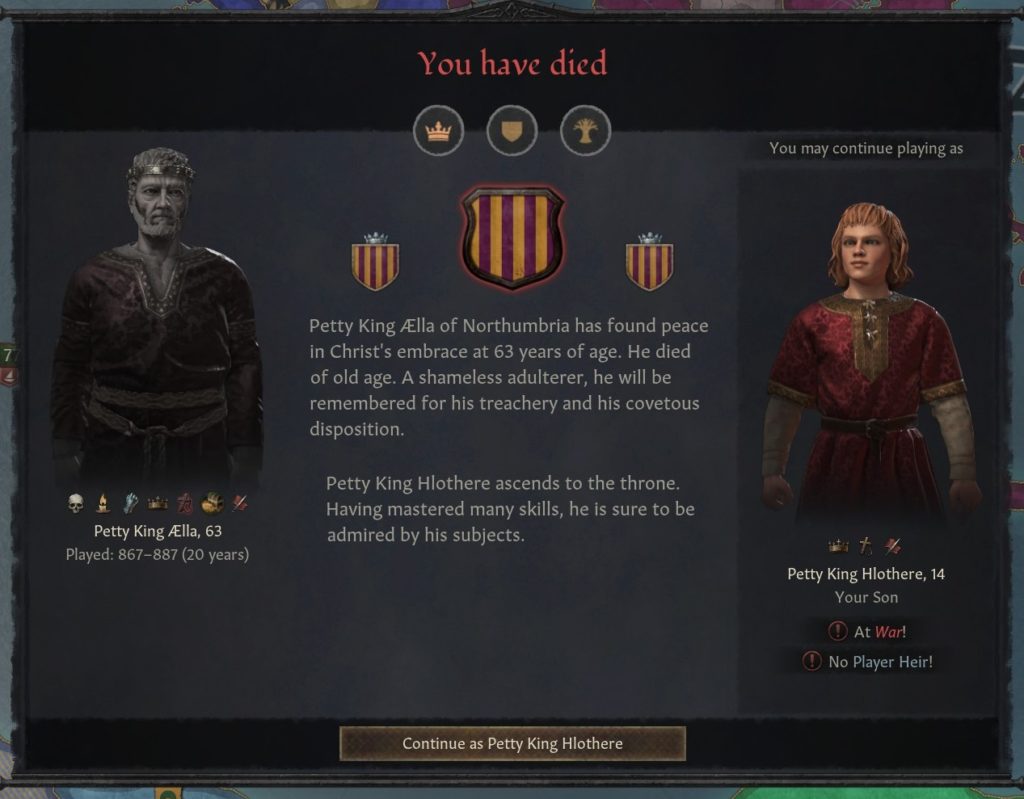 Well, crap.  I guess the old saying is true: “Live by the poisonous spider in the bedroom, die by the suspiciously scented gift basket.”

The chronicler notes Ælla died of old age, so I guess I failed to gasp out Halfdan’s name.  The stuff about treachery and adultery seems pretty on the money, though.

The king is dead, long live the king!  Hlothere has two years until his majority, and his army is still en route to the Holy Land.  I’m sure nothing bad will happen!  (Spoiler alert bad things will absolutely happen.)