When we last left Northumbria, Petty King Ælla Oswulfson was facing the classic problem: no son to inherit.  Kinging is hard, guys. 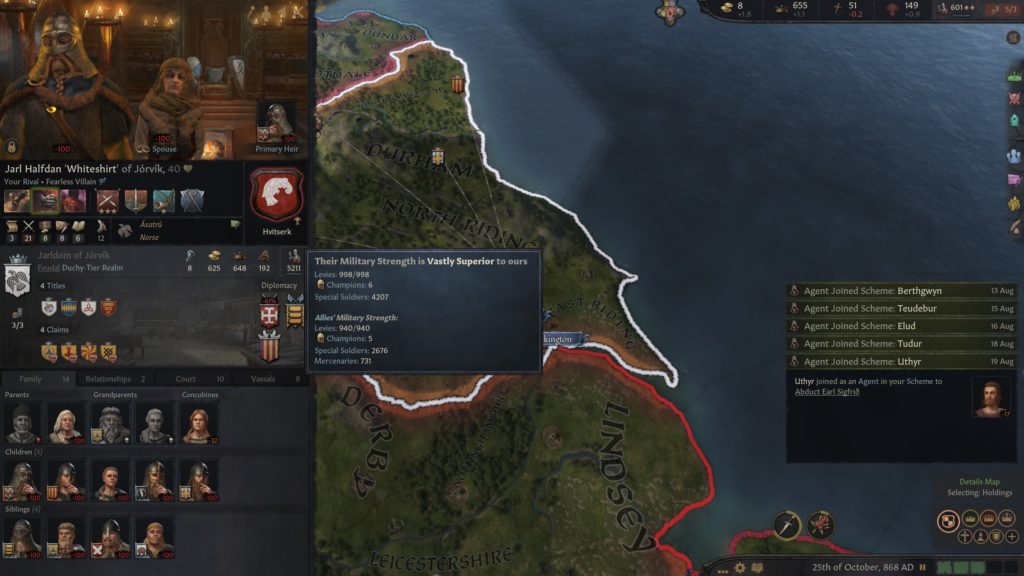 Just because that’s a looming problem doesn’t mean we don’t have other problems, though.  We’re still surrounded on two sides by hostile Vikings.  The northern realm, Suðreyjar, is a little weaker now, but Jórvik still has over 4,000 event troops plus overseas allies.  Espionage is about the only area where I have the advantage.  But my attempt to murder Jarl Halfdan was a failure, and trying again would be counterproductive — if he dies, then the truce that’s protecting me is over.

However!  Intrigue is good for more than just murder.  Halfdan will be much less likely to declare war on me if I have his son in my dungeons, so I get to work trying to kidnap him. 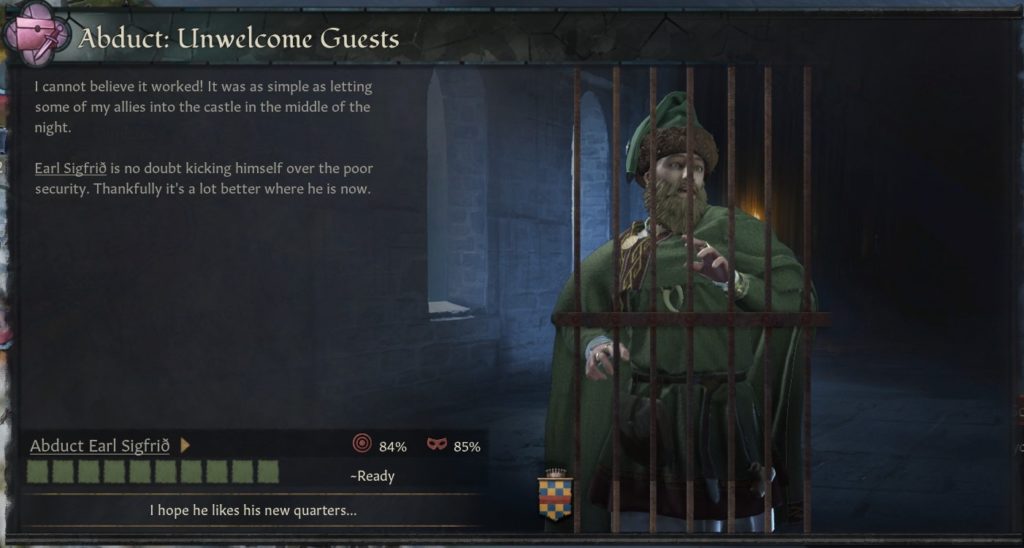 Success!  That was surprisingly easy thanks to Ælla’s monstrous intrigue and everyone at Halfdan’s court hating his son Sigfrið.  So one flank is hopefully secure, plus I can ransom him for some quick cash if I need it, Halfdan has plenty. 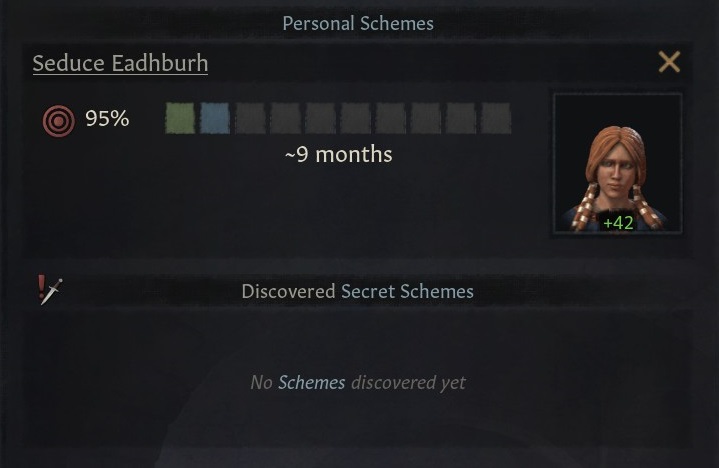 Meanwhile, you know what else is covered by intrigue?  Seduction.  I look around the court and settle on my spymaster Eadhburh, who really likes me and is of childbearing age.  It’ll take a little while, but Ælla is a fantastic lady’s man so my chances are good.

In fact, Ælla is so good at this that he has an “automatic success” option on these seduction challenges. 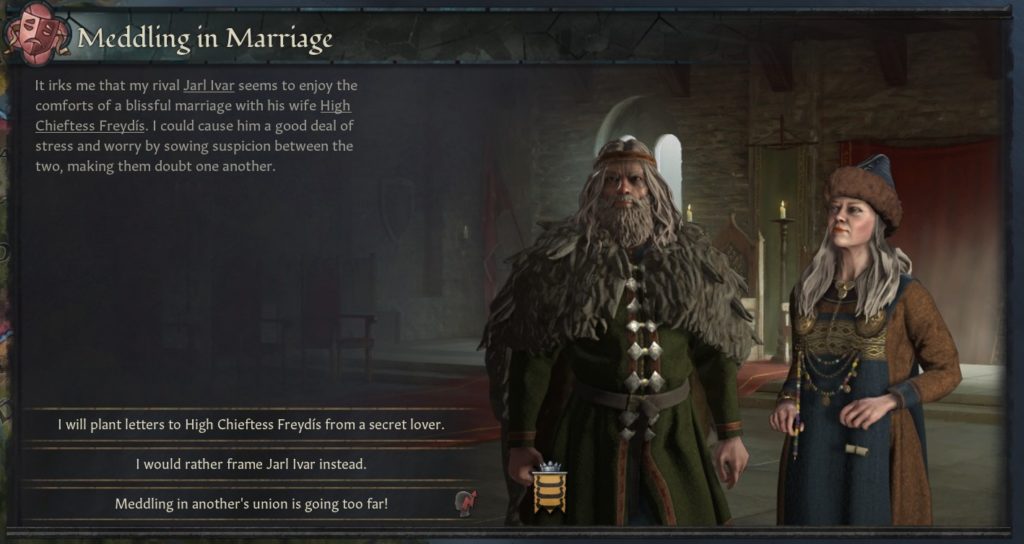 Meanwhile, for balance, I’m going to get back at Jarl Ivar in the pettiest way imaginable.  Take that, martial harmony!

I can understand why this decreases my stress — in CK3, you lose stress for acting in character, and Ælla is a scheming asshole — but why does it increase my prestige?  Did I tell everybody about it? 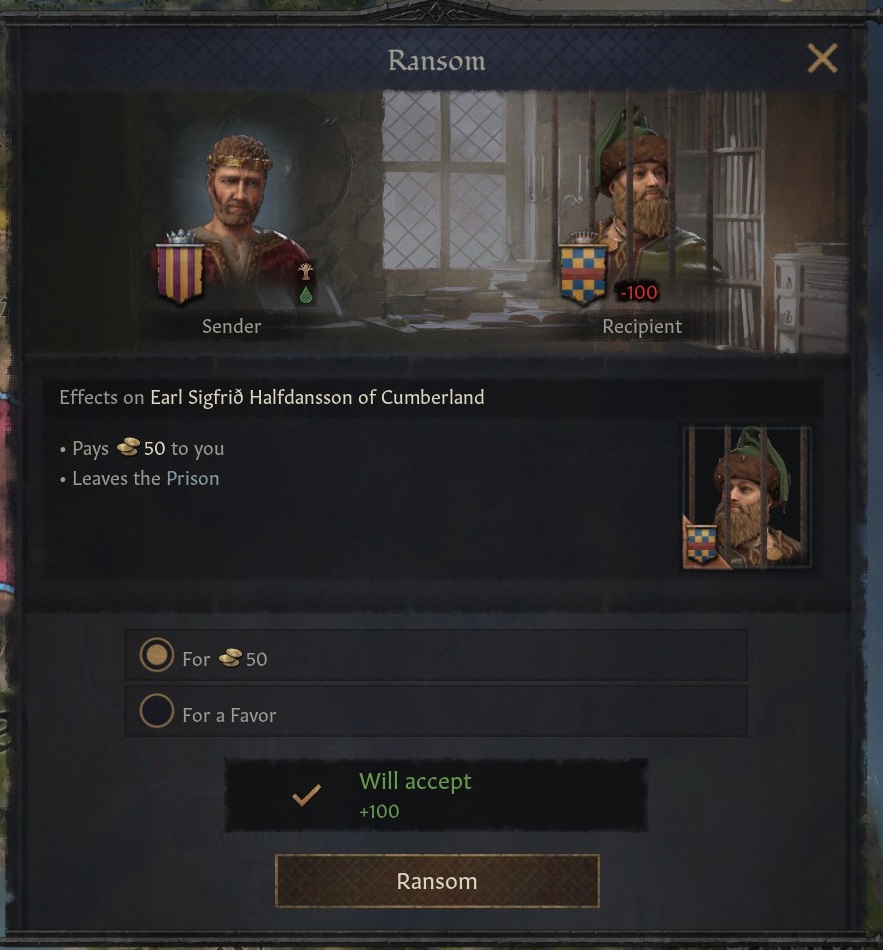 The Vikings want to ransom Sigfrið, but I’m keeping him hostage to ensure his dad’s good behavior.

This girl is totally into you, Ælla.  You don’t need to go full Romeo and climb up to her balcony with a rose between your teeth.  Just ask her out.

Or … ask her to join you in the stinking privy, that works too I guess?  Gross.  You’re a master of intrigue and also king, is this really the best you could come up with?

Oh well.  You have the “continuing relationship” option and the “love ’em and leave ’em option”, and I take the former, since my goal is to have some bastard children.  Also, she’s my spymaster, so I’d probably stay on her good side. 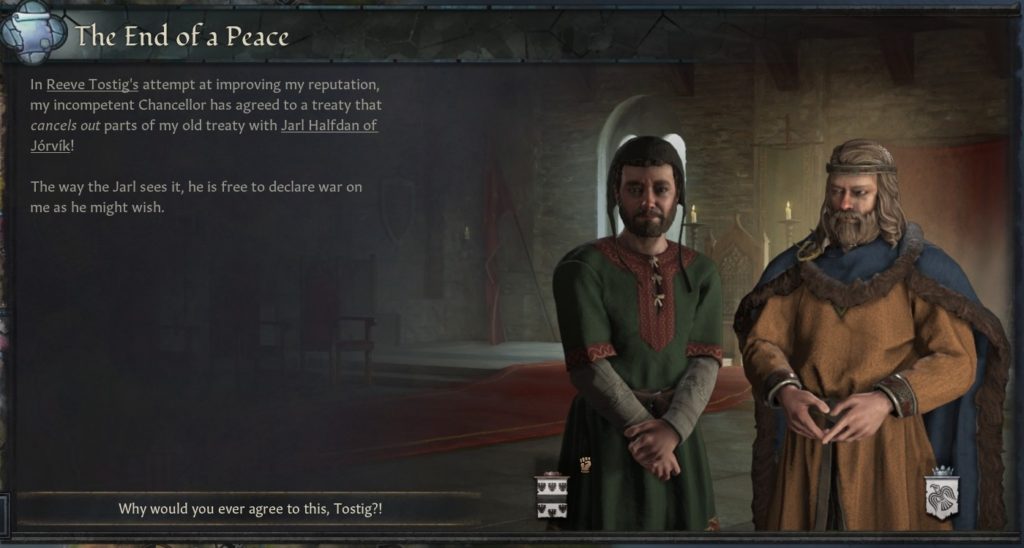 This is real bad, though.  I guess we’ll find out how much that hostage is actually worth.

Tostig is trying for a “puppy hoping to avoid getting smacked with the newspaper” expression here?  While Halfdan is apparently checking him out. 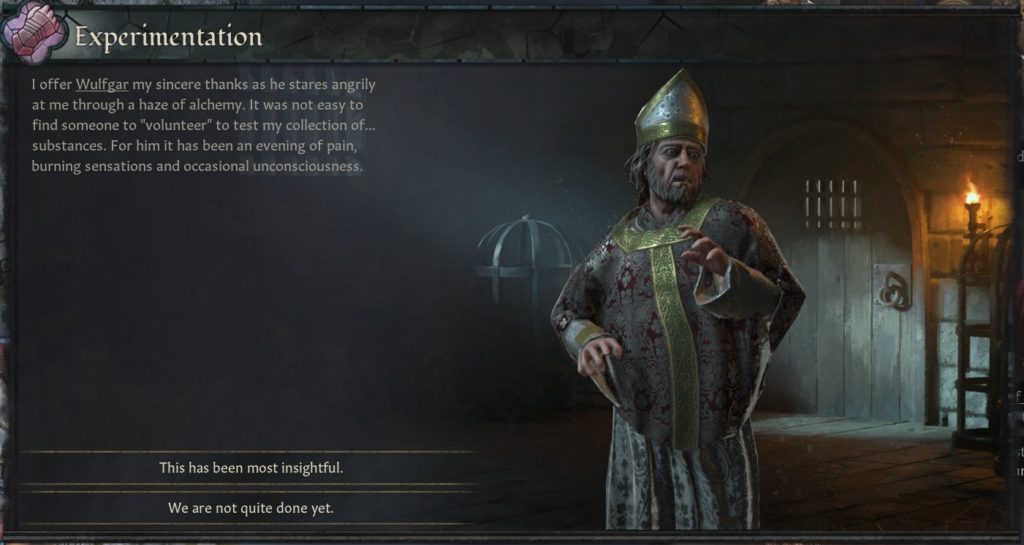 In the interval, some weird shit is going down with the clergy.  In CK3, your head bishop has to endorse you, which means having a positive opinion, otherwise you don’t get clerical taxes and levies.  Bishops mostly hate me because I’m, you know, a horrible sinner with negative piety, but I’ve been working on getting on Wulfgar’s good side.

Ælla then decides the best thing to do is to use him as a test subject for his poisons.  Needless to say this makes Wulfgar unhappy.  I pick the second, riskier option because a) it gives better poisons and b) frankly I’m thinking repairing relations with Wulfgar may be a lost cause at this point… 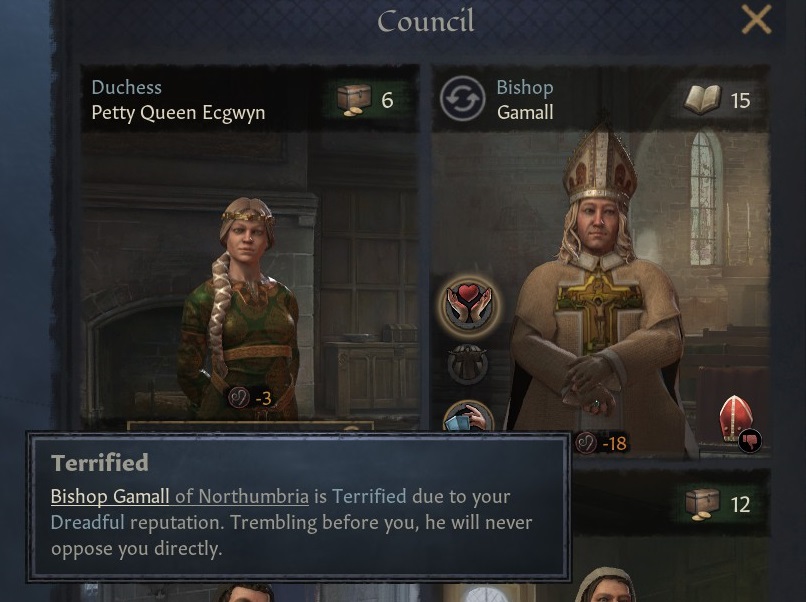 So, did we poison the Bishop to death?  Yes, yes we did.  But the good news is the new bishop is a coward who doesn’t have the balls to stand up to me.  Although he still withholds his approval, so Ælla works on becoming his friend.  I’m starting to imagine this is kind of a creepy process.  “Yes, why don’t I show you my … collections …” 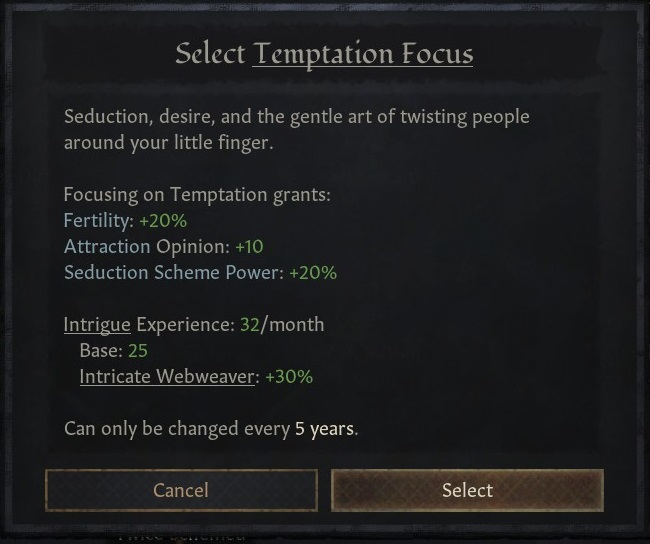 Meanwhile, operation Have A Son continues, and I switch my life goal to “get laid a lot” for the increased fertility. 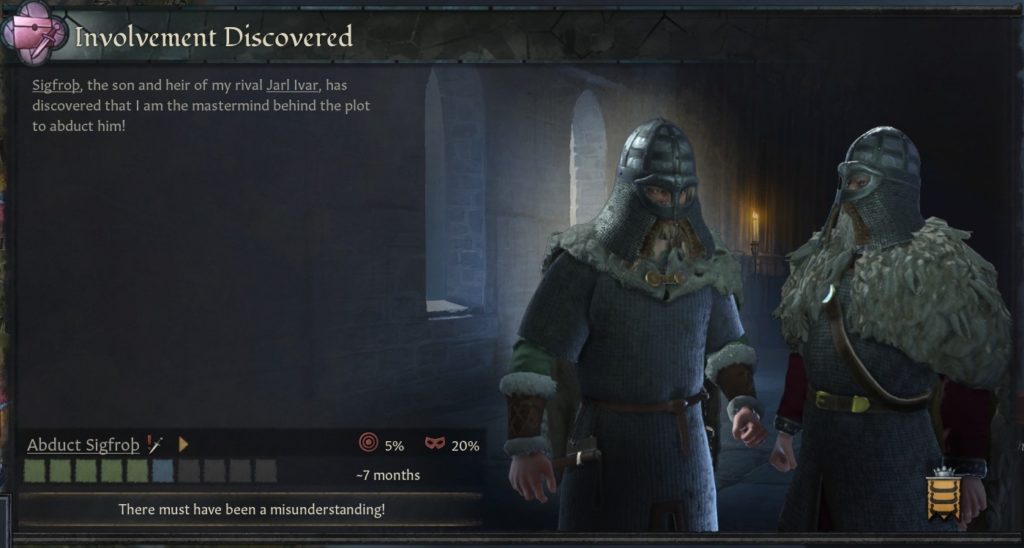 Since the hostage thing is going well with Halfdan, I try to take Jarl Ivar’s son captive as well.  Unfortunately he’s better-liked, and someone spills the beans, so that isn’t going to fly. 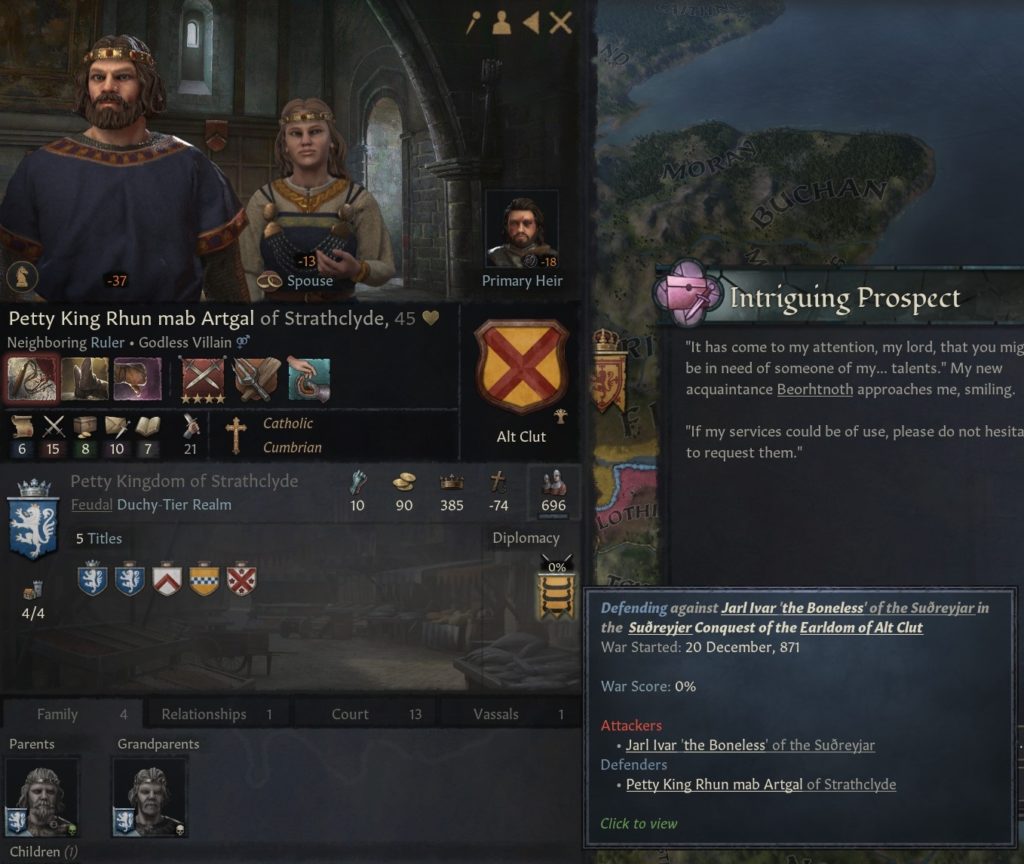 Fortunately, Jarl Ivar doesn’t currently share a border with me.  Unfortunately, he’s working on rectifying that by grabbing a county off King Rhun of Strathclyde.  Assuming he wins, and he probably will, I’ll have to worry about him again. 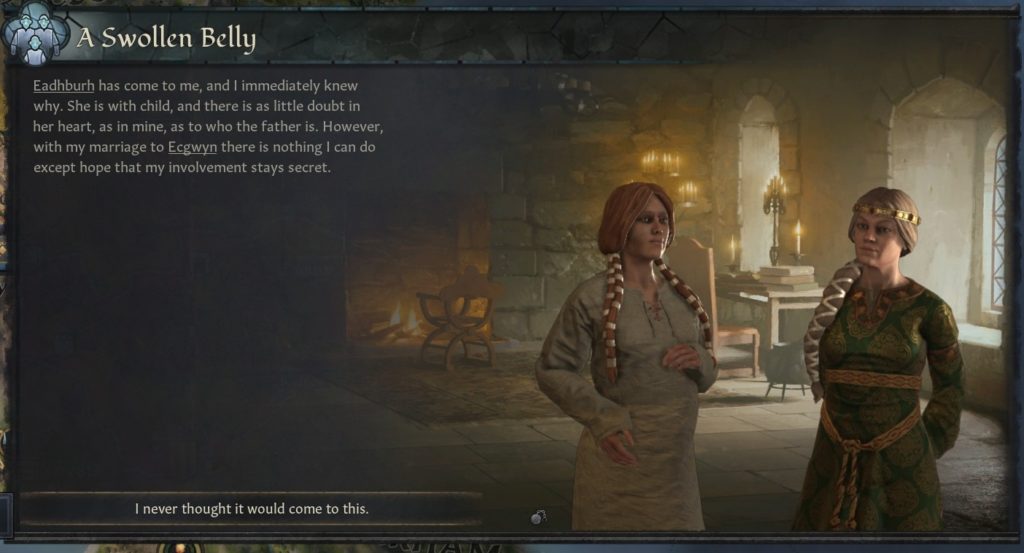 But Operation Have A Son is, um, bearing fruit!  Now just to wait for that 50/50 die roll.

“I never thought it would come to this”?  Like, has no one given Ælla the sex talk?  “See, when a man and a woman given in to their naked lust in a filthy privy, sometimes…” 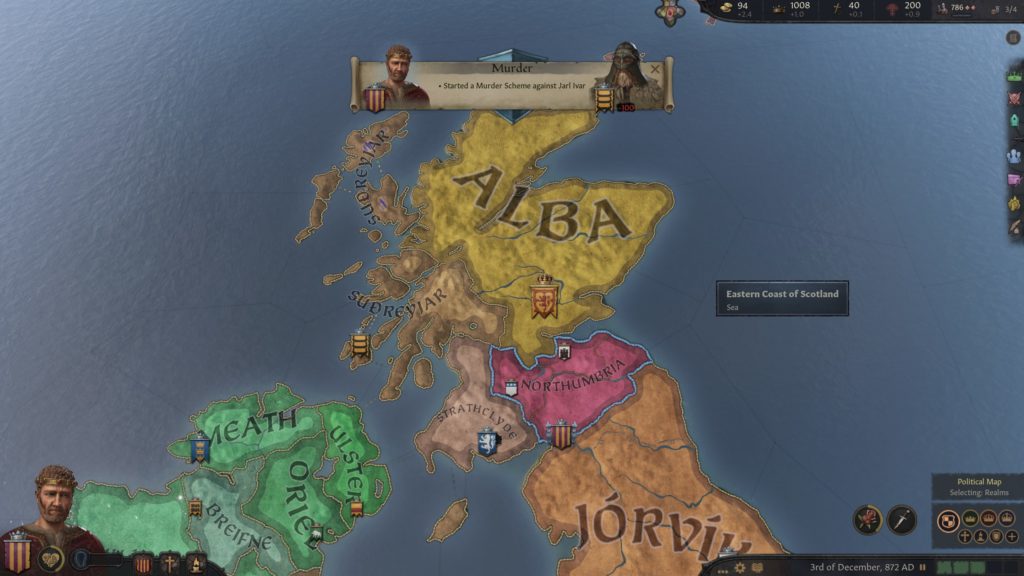 Jarl Ivar has won his war against Strathclyde and is on my border again, so I get back to trying to kill him.  Unfortunately his son is on guard against abduction now. 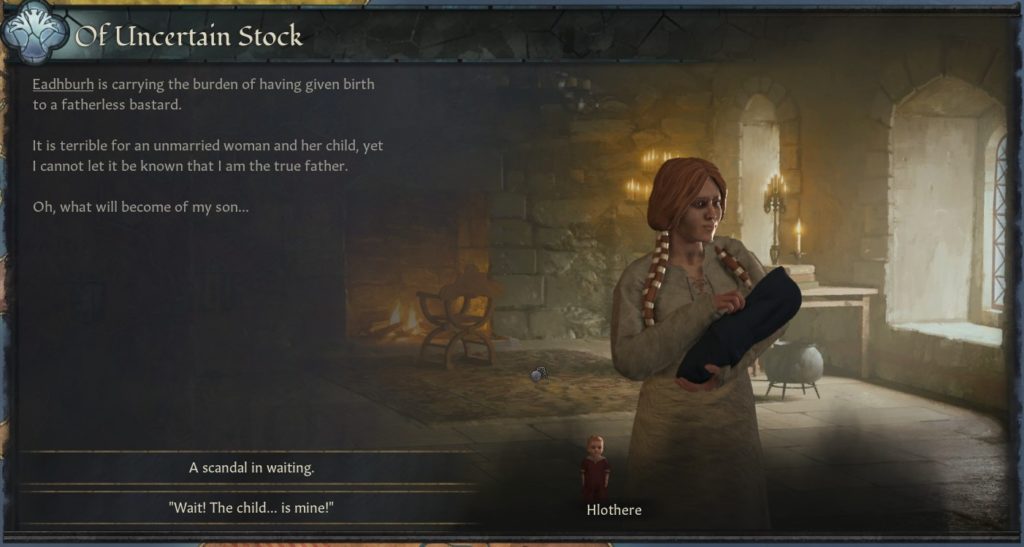 Son acquired!  Oh, I’ll tell you what will become of him…

That little bastard is going to be king.  Assuming he survives of course.  The clergy don’t like that I’ve admitted to adultery, but if they bother me I’ll just poison the lot of them. 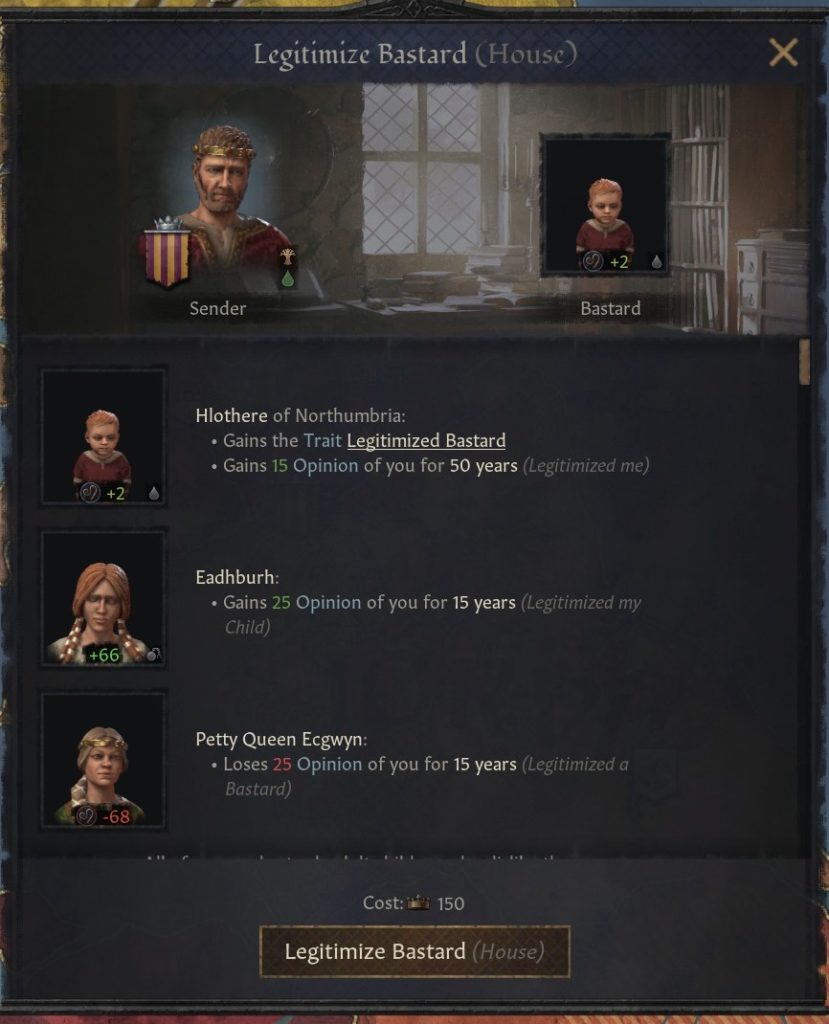 My wife is understandably a little upset, but my lover is happy, and of the two it’s Eadhburh who is in charge of my private death-squads so I call that a win.  Baby Hlothere loves me just that bit more, too. 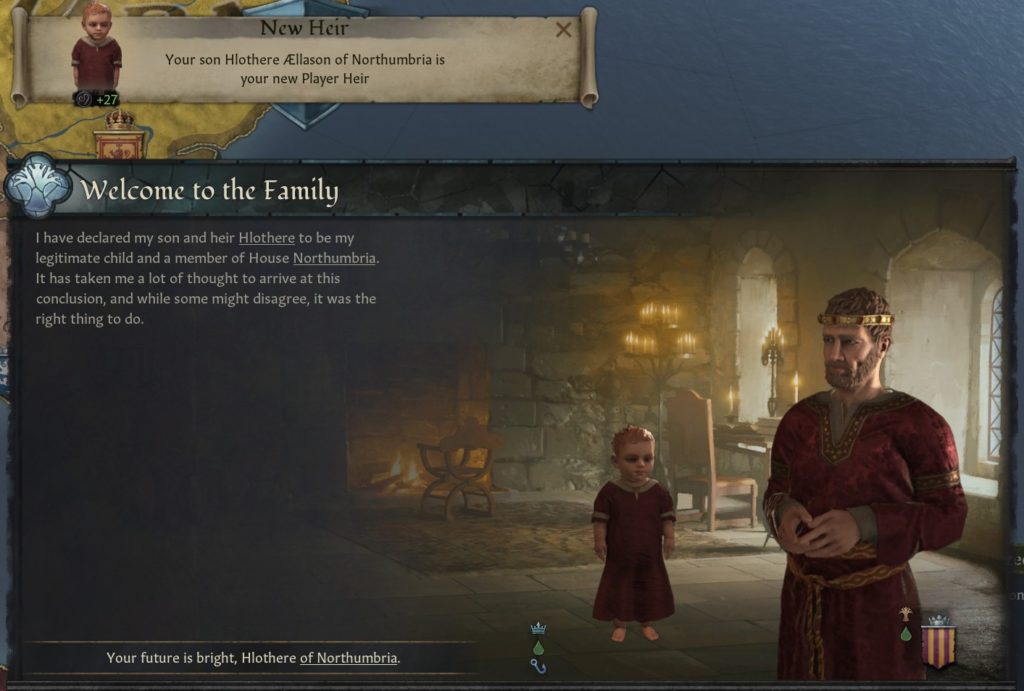 Yaaaaass.  The threat of my daughter with her non-dynastic children is lifted, at least as long as Hlothere stays alive.  That’s one problem tenatively fixed. 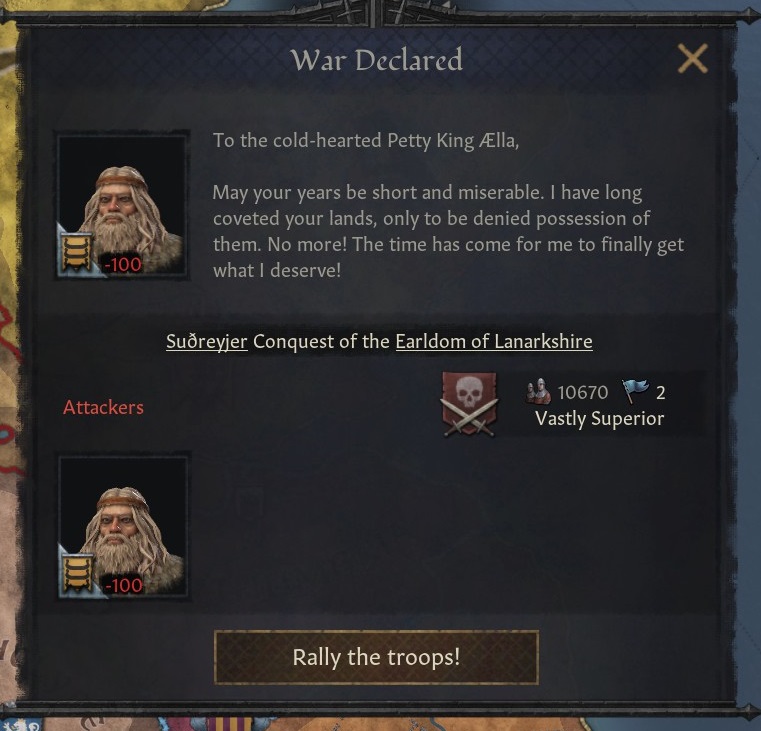 Aaaaaand here comes the other problem again.  How dare these Northmen just take people’s land, instead of following the time-honored tradition of forging documents asserting a claim to it?

My scheme has come to fruition, though, so we have at least a chance of taking the Jarl out before things get started… 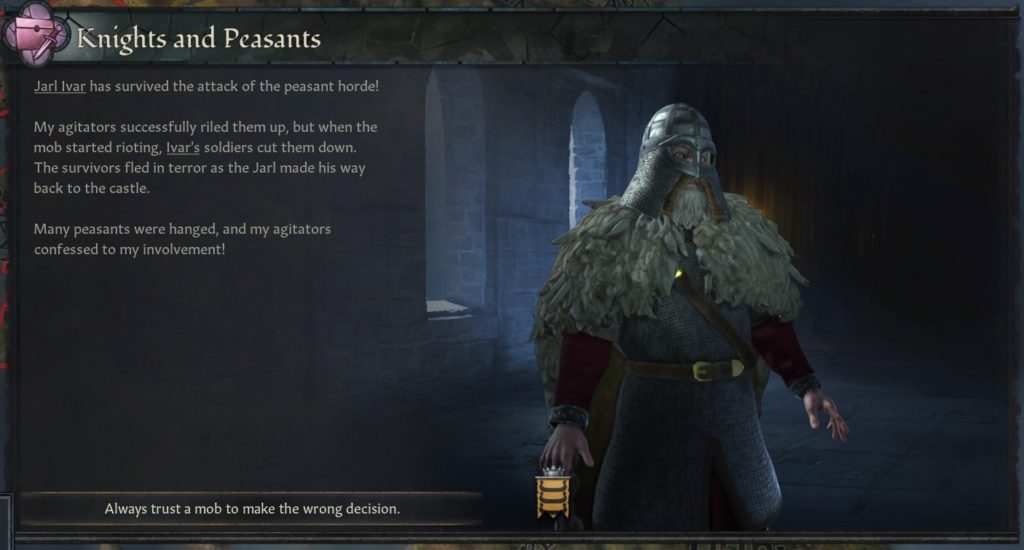 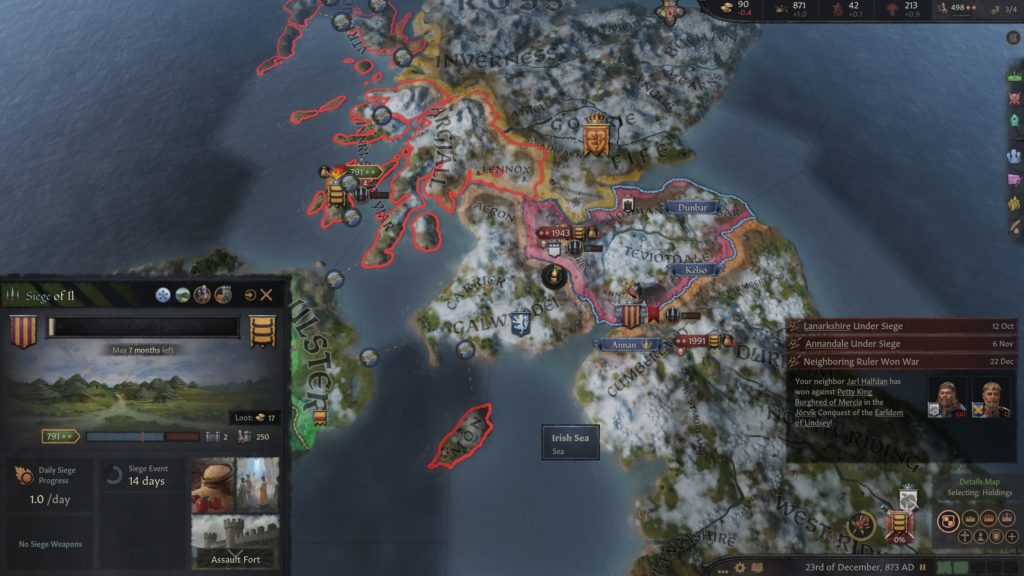 None of my clever tricks are getting me out of this one, even trying to distract him by burning his capital down.  These animals have learned something. 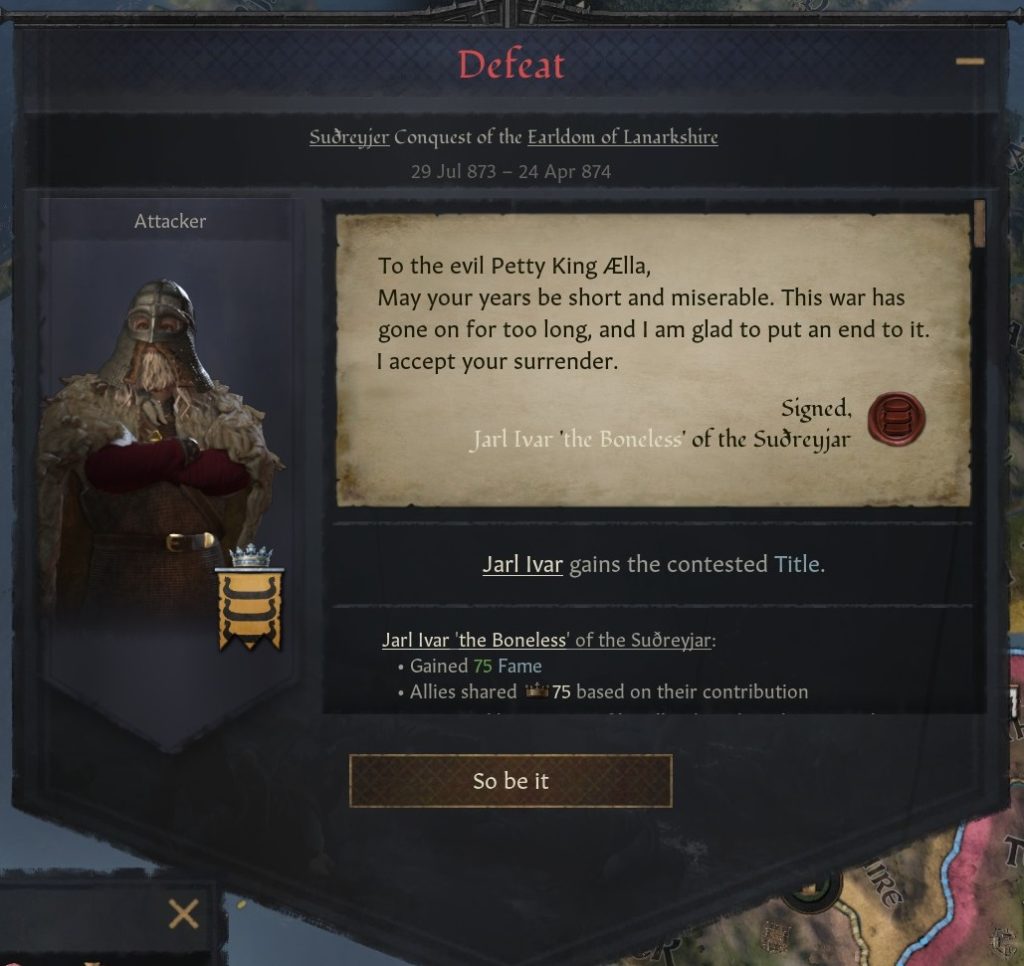 The only advantage is that rather than half the kingdom, the war is over a single county.  Still, that leaves me with only four, which is not promising.

Is this irony?  Pretty sure this is irony. 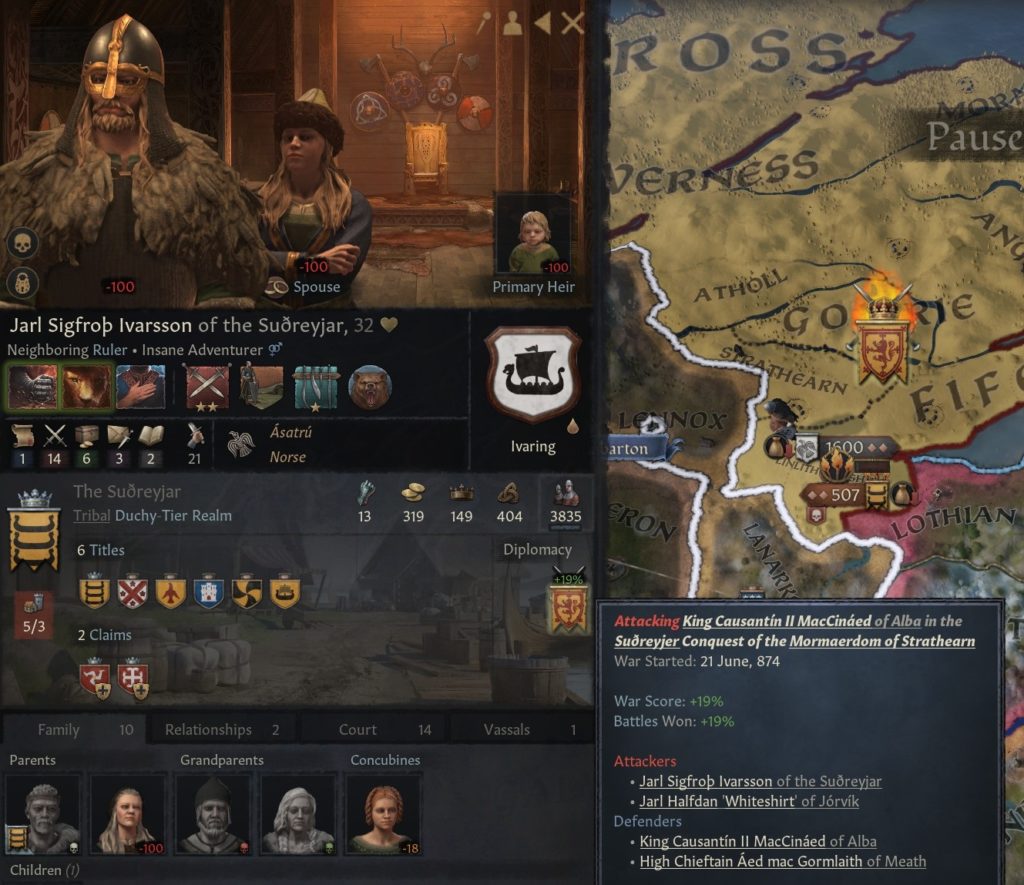 The new Jarl, while still way stronger than me, has immediately gotten in a war with the Kingdom of Alba to the north.  I hope they at least kill off some more of his event troops.  As long as no more disasters turn up… 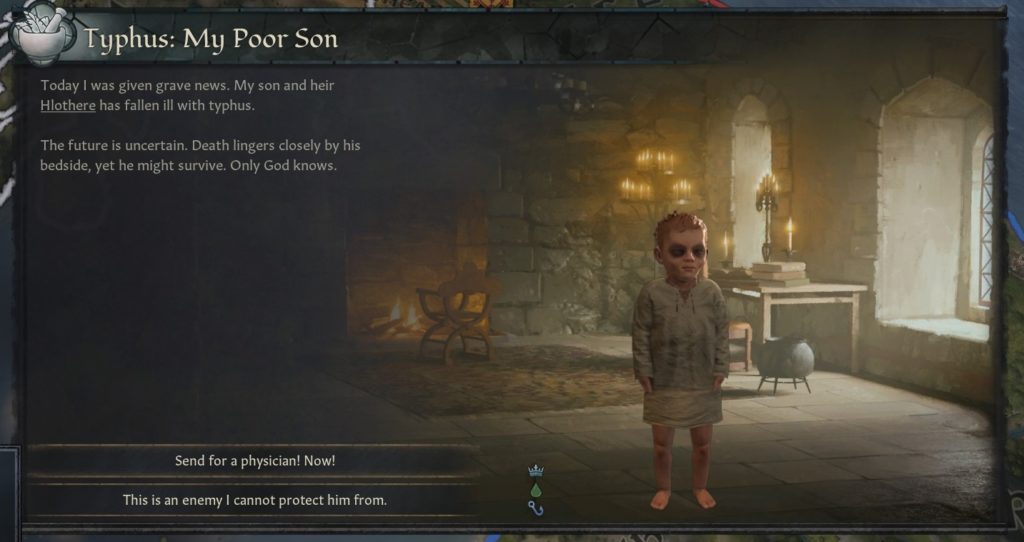