Part One and Part Two.

When we last left our “hero” Ælla Oswulfson, he had just been informed that the bastard son he had bred and legitimized at some expense had contracted typhus.  So things are going great.  Someone get me a doctor! 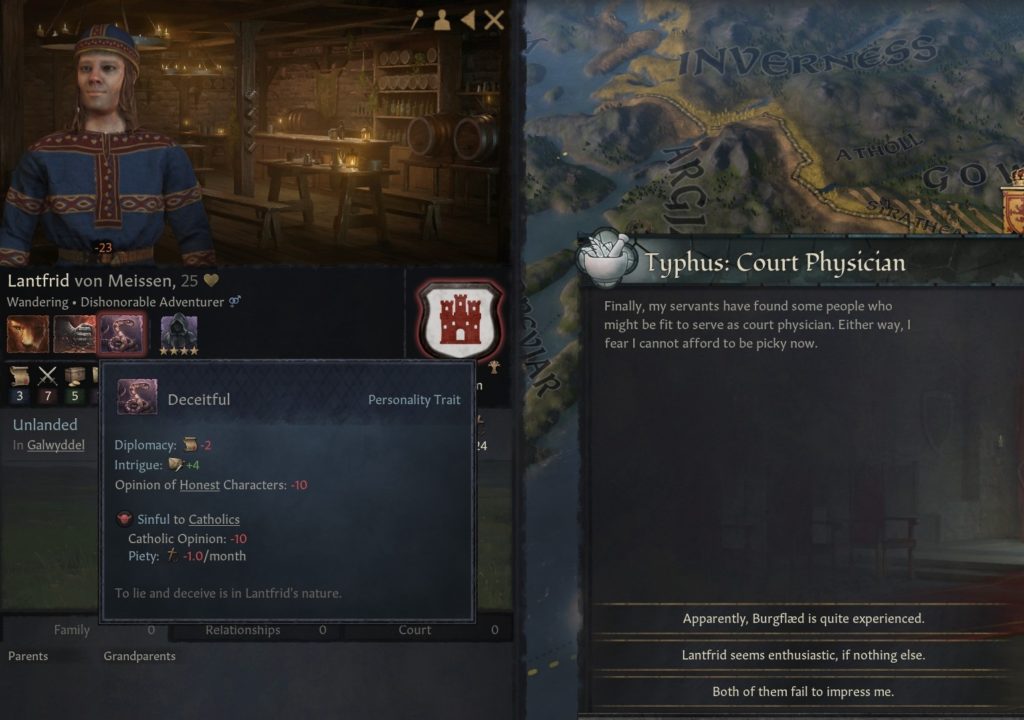 “Okay, sire, we have two possibilities for a doctor.  First we have this guy, who is a deceitful, wrathful schemer and also quite dumb. 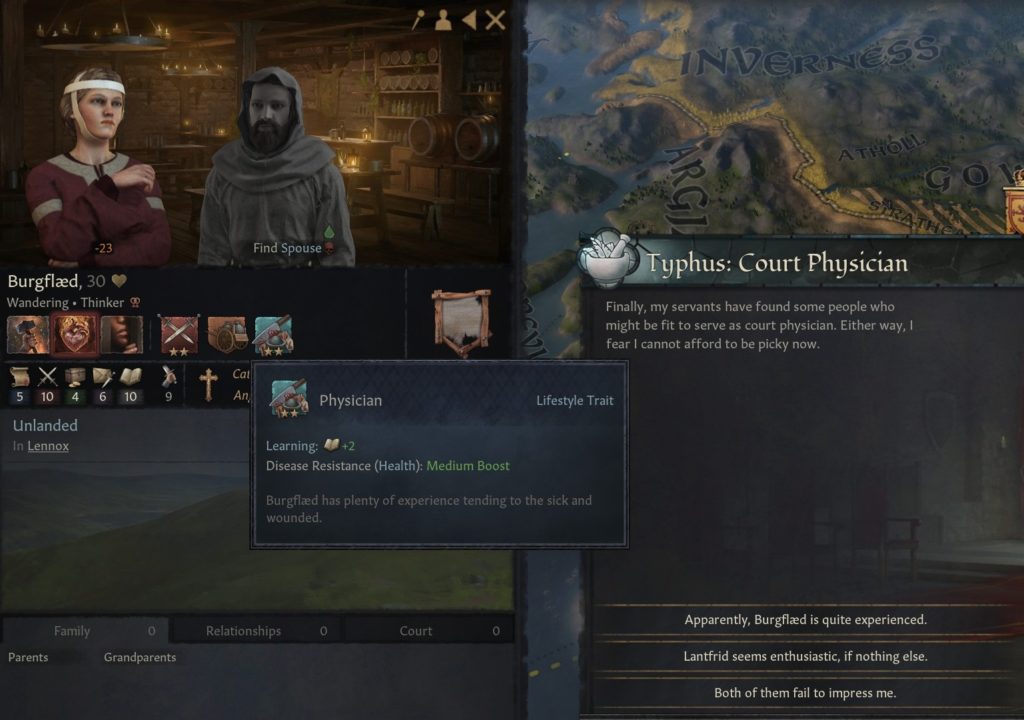 “Or we have this lady, who is industrious, learned, and actually a doctor.”

“…I feel like this is not a hard choice.”

Burgflæd sets about trying to cure my son of typhus.  I contemplate seducing her, since I could use a backup son, but she’s a lesbian — unlike in CK2 you can’t overcome that just by stacking up more modifiers.  People are no longer “gay until the dude is just that hot” I guess. 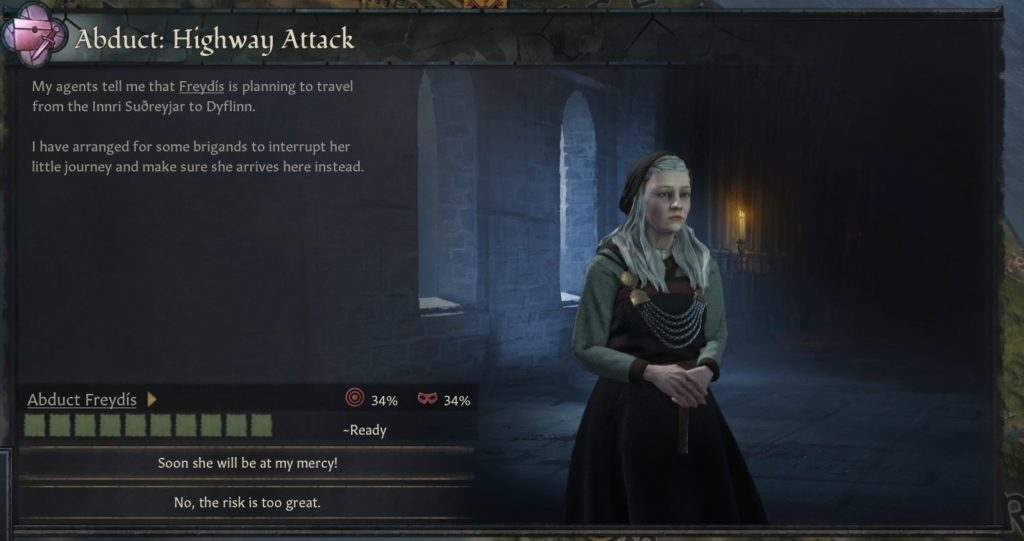 While that’s underway, I take another stab at dealing with my friends in Suðreyjar.  My old enemy Jarl Ivar is dead, and his son’s heir is the teenage Freydis.  Since having the Jarl’s son in custody has kept Jórvik off my back, I try for an abduction.

…Dyflinn is in Ireland so these must be sea brigands? 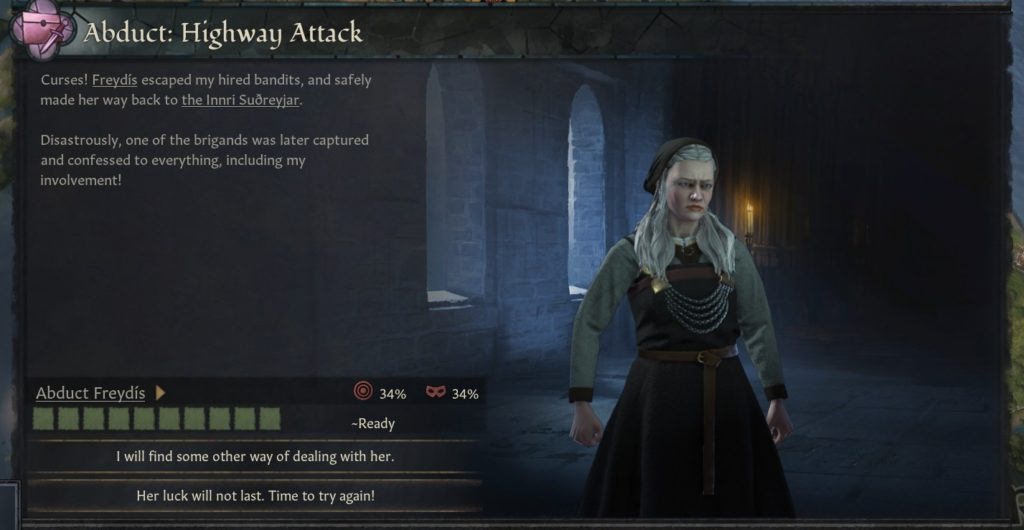 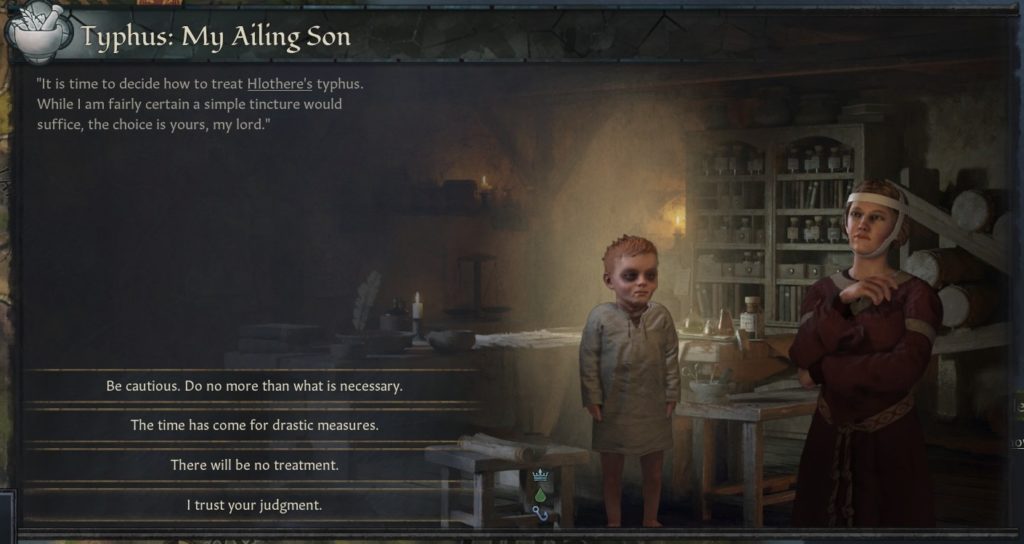 Why are you asking me?  That’s what I pay you for! 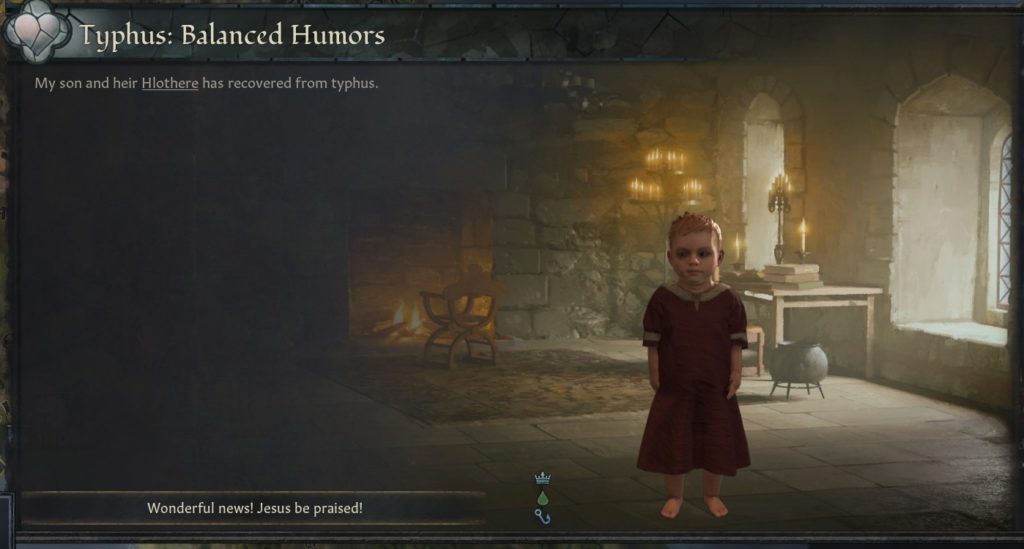 That was fast.  Did she just wash off his eyeliner? 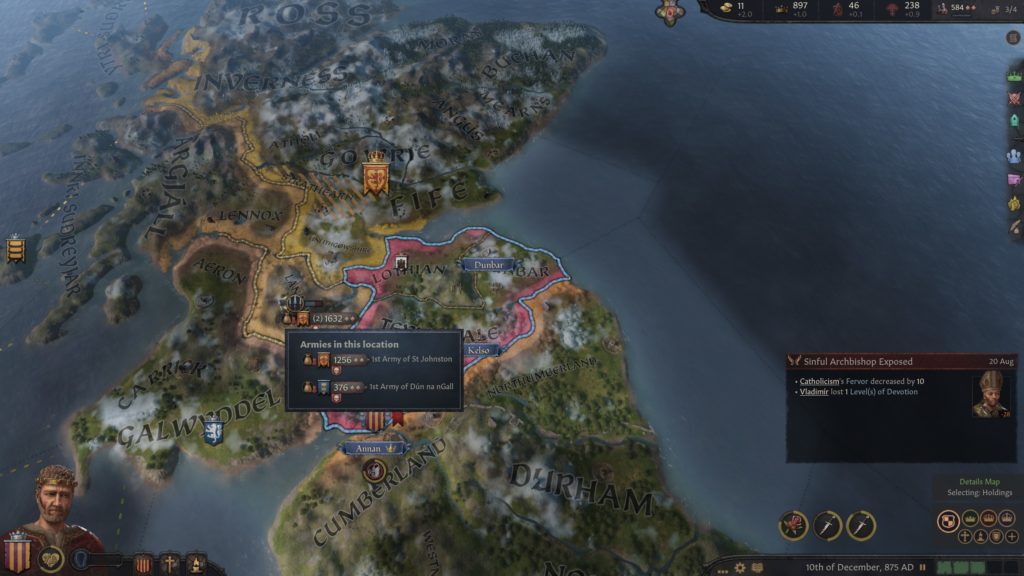 The war between the Vikings and Alba is going badly for Alba, though the fact that it’s dragged on this long is encouraging.  Use up those event troops, guys. 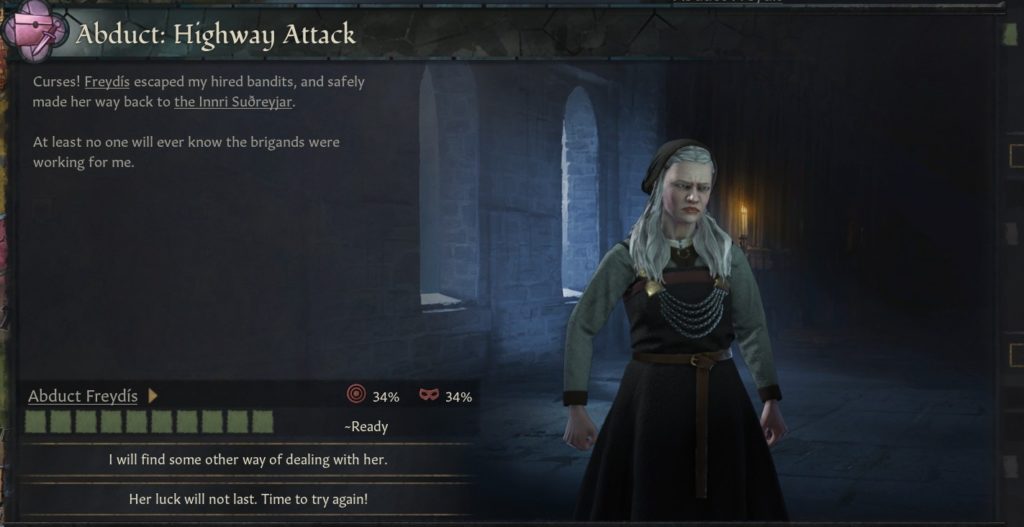 Curses, yet another foiling!  I’m starting to feel like a Saturday morning cartoon villain. 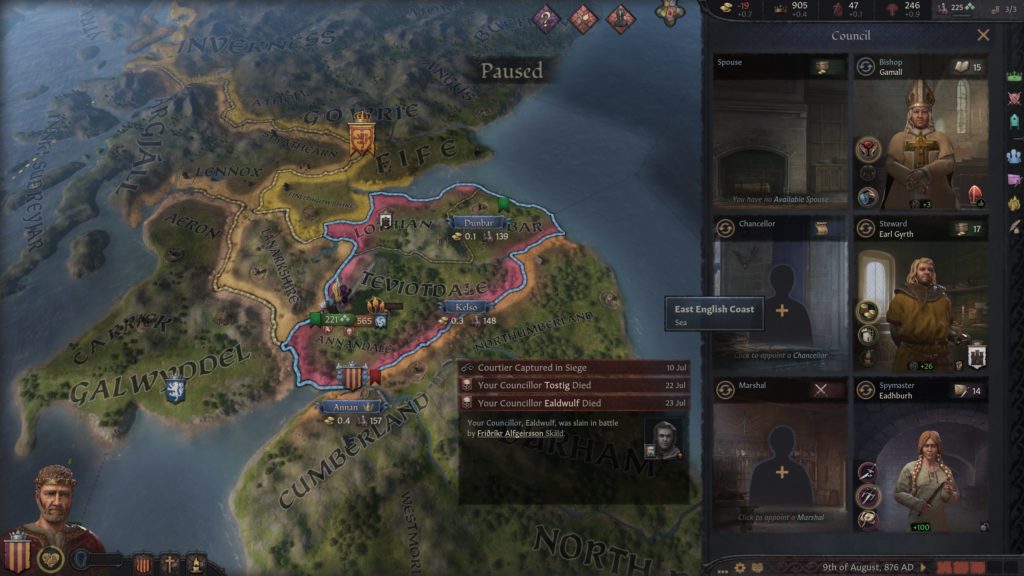 Even though my local Vikings are busy elsewhere, we still have to deal with other unrelated Vikings, who turn up and start setting stuff on fire.  In this case “stuff” means “my castle”, where they kill my Chancellor and Marshal and abduct my wife.

“When I said ‘Take my wife.  Please!’ I didn’t mean it literally!  My stand-up career has ended in disaster.” 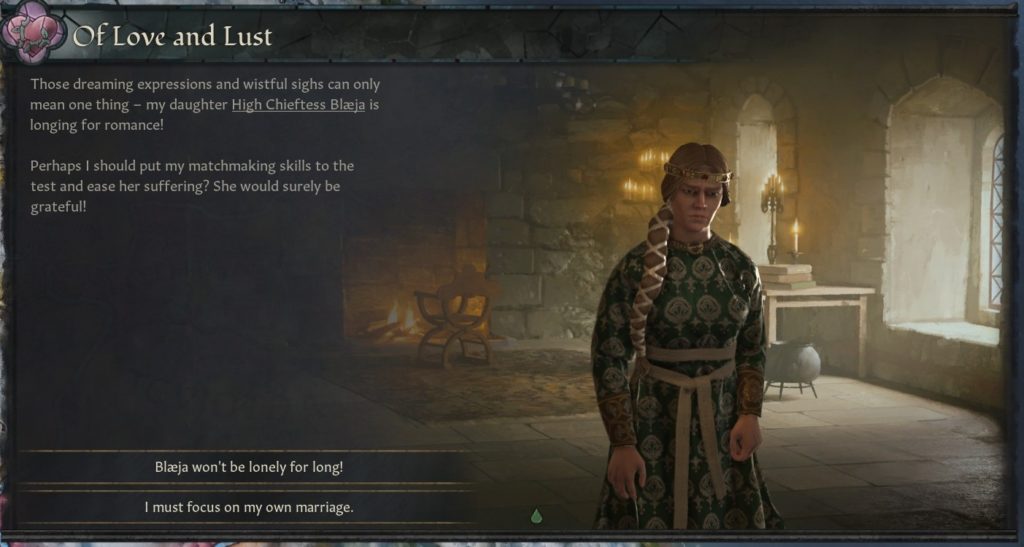 Ælla bounces back quickly though, and is always ready to help out his wayward daughter, especially since she’s married to a damned Viking.  Also, I should absolutely not “focus on my own marriage” right now since my wife is in a Viking prison and also I cheated on her and then legitimized the bastard. 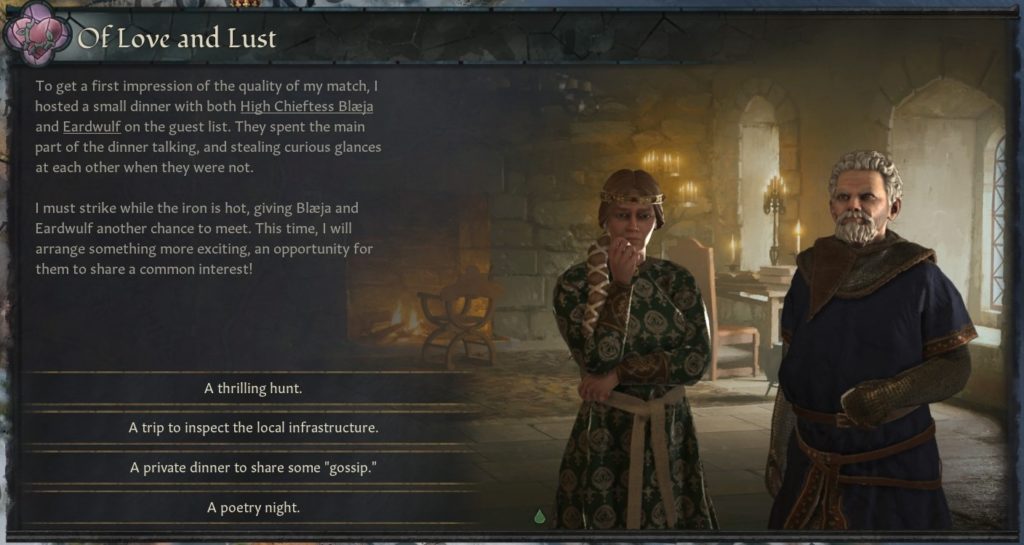 I mean, who wouldn’t like … this guy.  With that beard he has!  Classic. 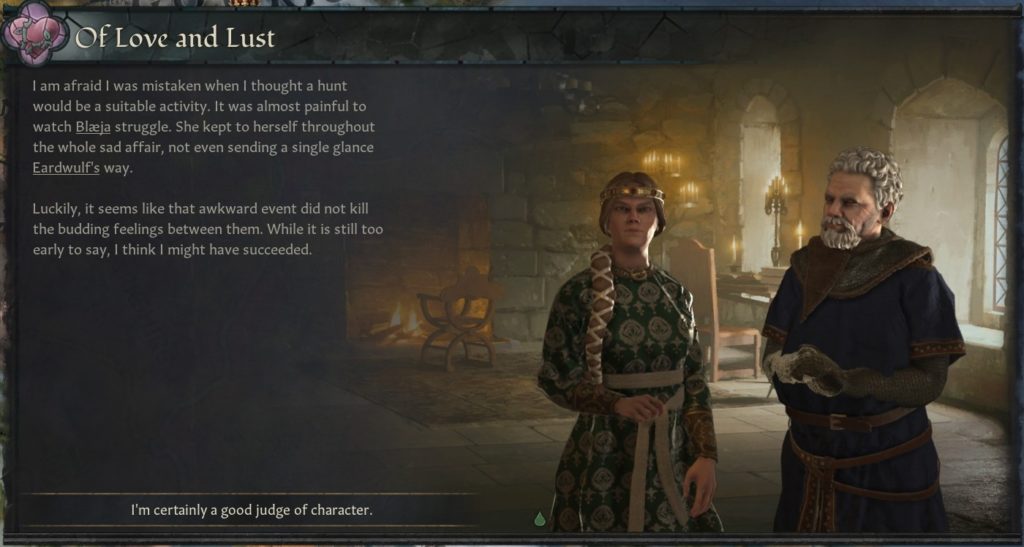 Ælla screws up everything but still congratulates himself.

Also this guy is my chancellor, so this is “TFW your Dad tries to set you up with one of his work friends who is 20 years older than you and also you’re already married to his sworn enemy”. 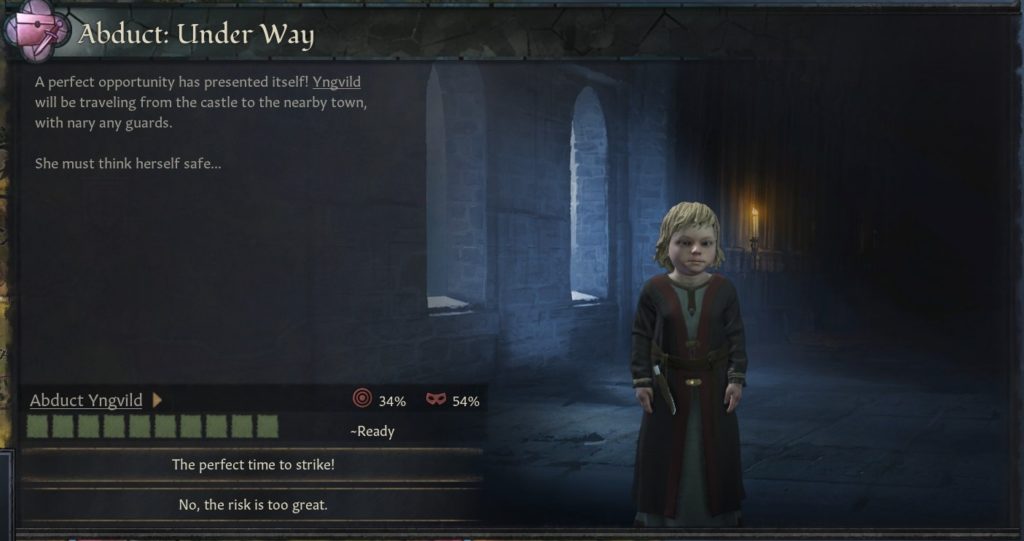 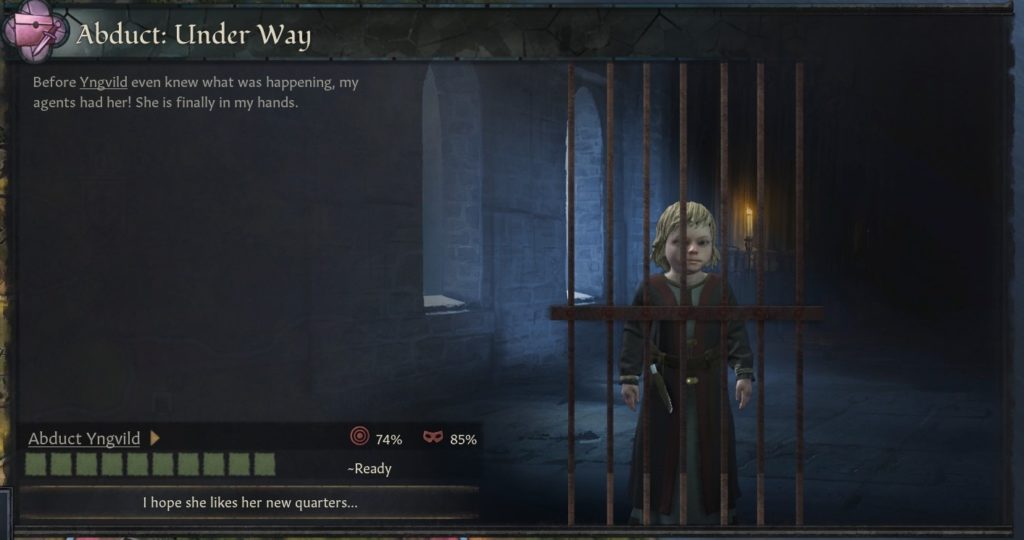 Ahaha!  You’re no match for my cunning intellect, baby.

Although, let’s be honest.  If you let your four-year-old walk into town by themselves, maybe the kid is safer with me. 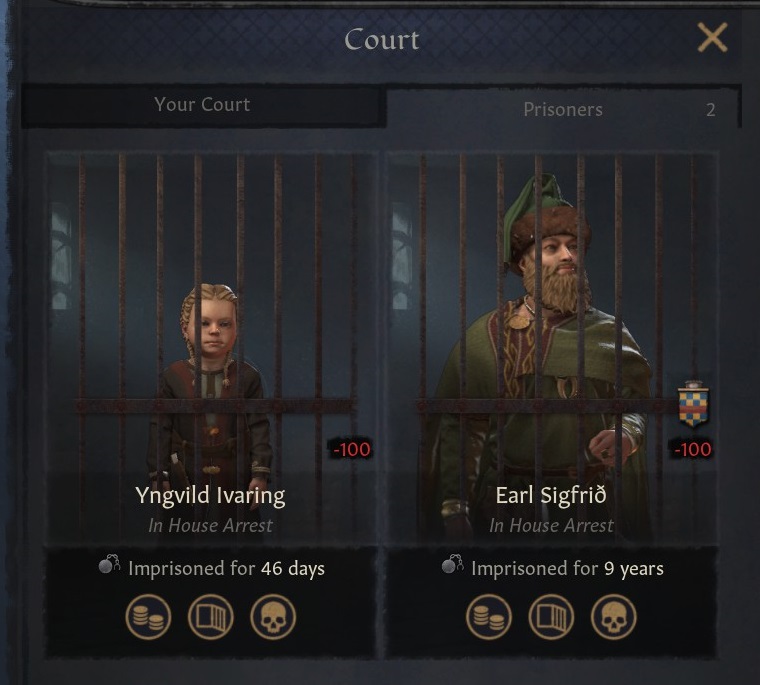 Anyway, I’ve now got the heirs to both neighboring Viking realms in my dungeon, so hopefully that will keep them out of my hair while I finish grooming my heir.  Eh?  Eh?

If Sigfrið has been in prison for nine years, where did he get that stylish hat? 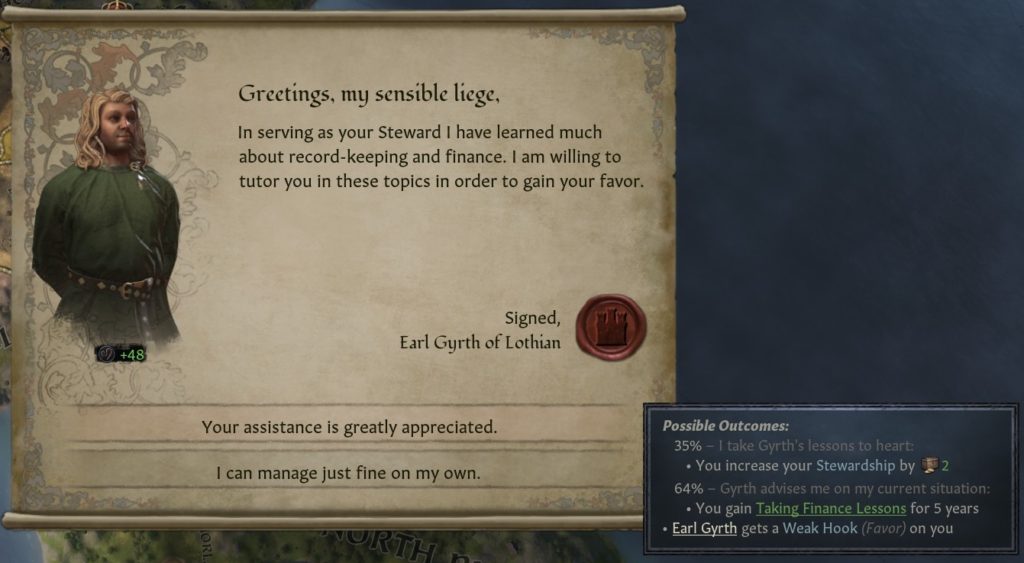 With things a little calmer, I settle in to try to make some money.  The only way I’m going to be able to expand is by hiring mercenaries to jump my neighbors in a moment of weakness, and that takes cash.  Ælla switches his lifestyle focus to “money-grubbing.”

Luckily, my only significant vassal, Earl Gryth, is willing to help!  What a loyal fellow. 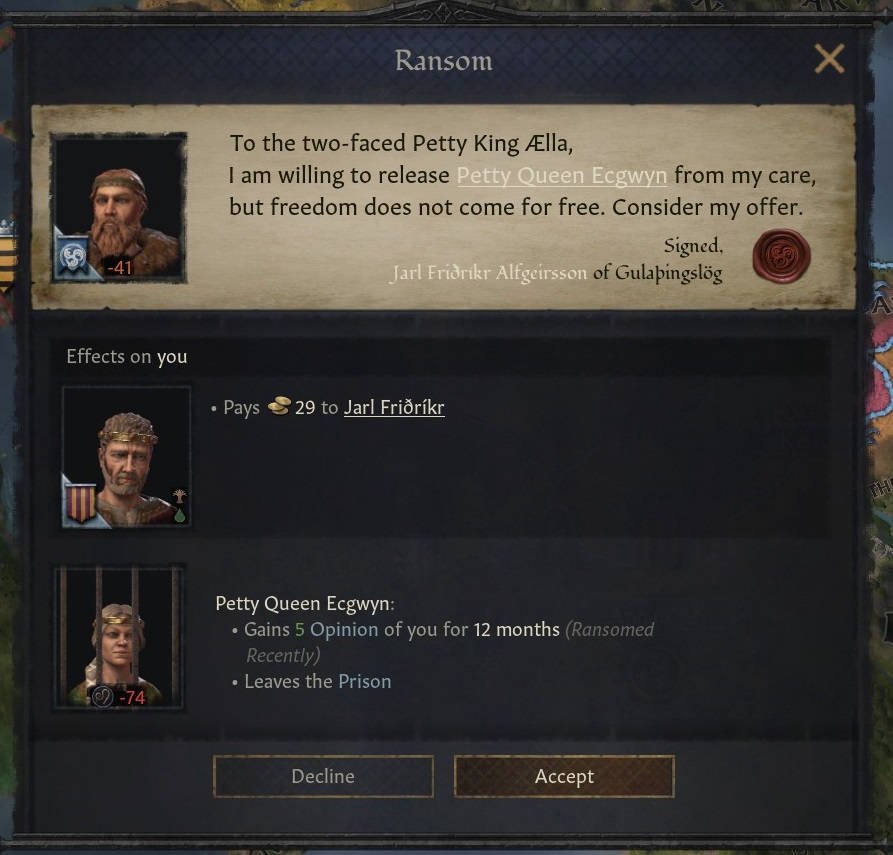 The Vikings who have got my wife are apparently sick of her, because they’re willing to ransom her for well below the going rate.  But I a) need that money to save up for some heavily armed thugs, and b) my wife is still pretty pissed at me for the whole “bastard son” thing, soooooo sorry honey!

Said son, Hlothere, is now starting his schooling.  I give him to Gamall (the Bishop who replaced the one I poisoned) because he’s pretty smart and I want him to like me. 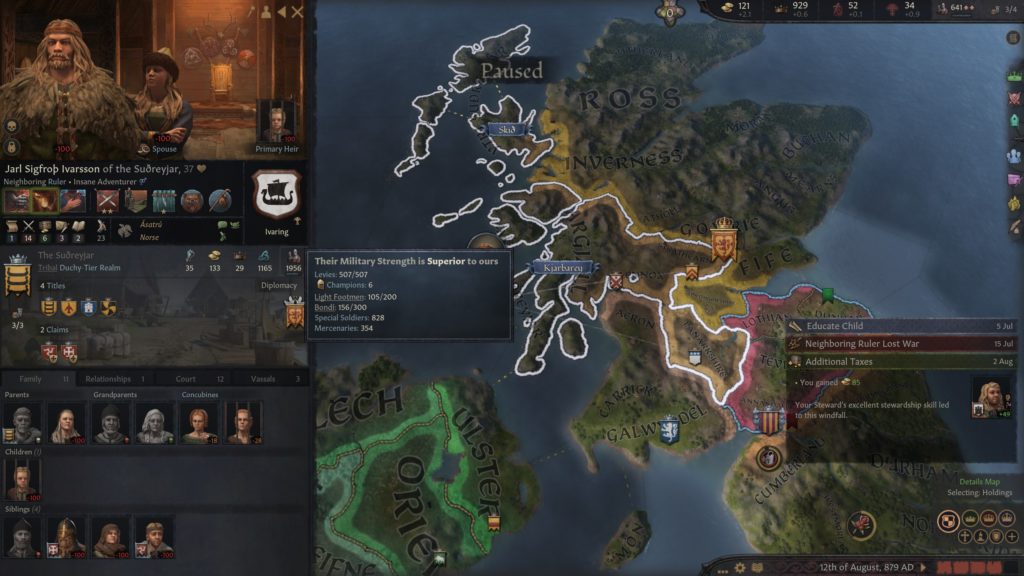 Suðreyjar is now tantalizingly close to the range where I could actually win a war against them, with only 800 event troops left out of their original 5,000.  And Earl Gryth has gathered a massive tax windfall!  You are my bro forever Gryth. 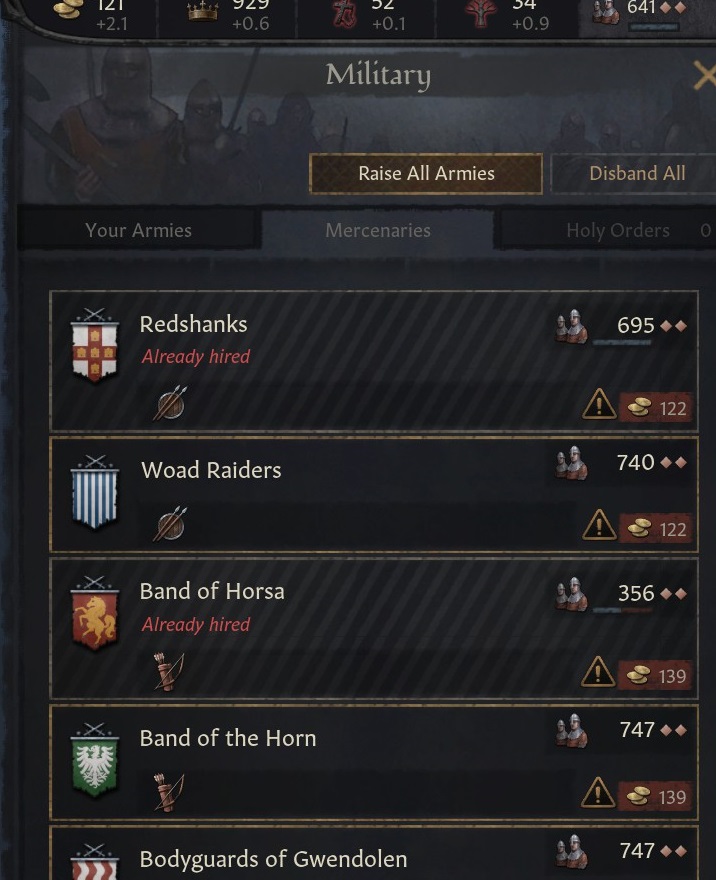 I can almost afford to hire a company of 700 or so mercs, which would at least put me into the same weight class as the Vikings.  Getting there. 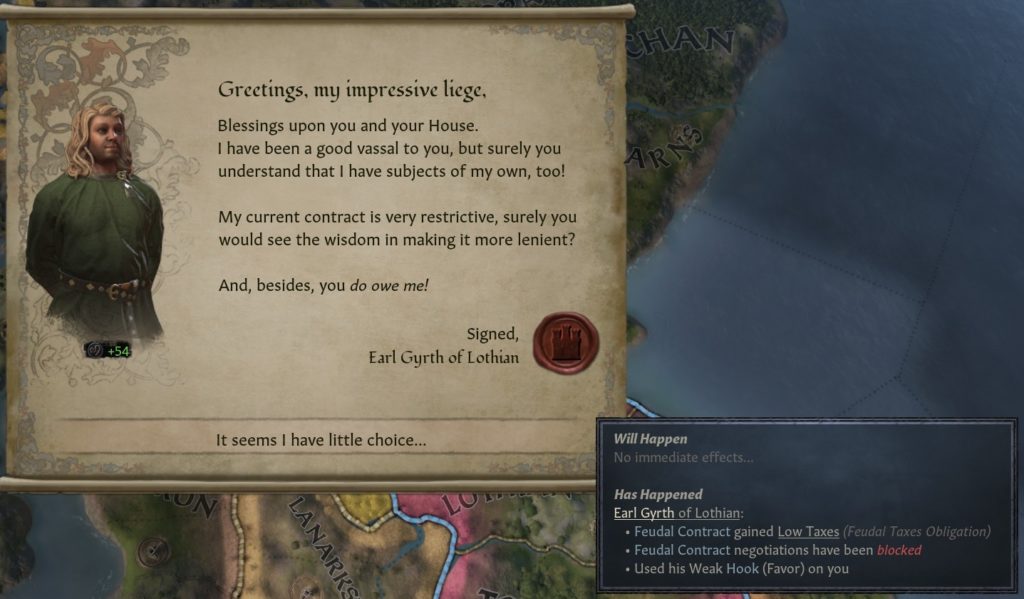 Earl Gryth is calling in his favor with me to cut his taxes.  I thought we were bros, man!

I guess he is having trouble with Vikings, but he wants me to pay for that, too.  You gotta keep on top of these Vikings, bro.  (Says the guy whose wife is still in prison.) 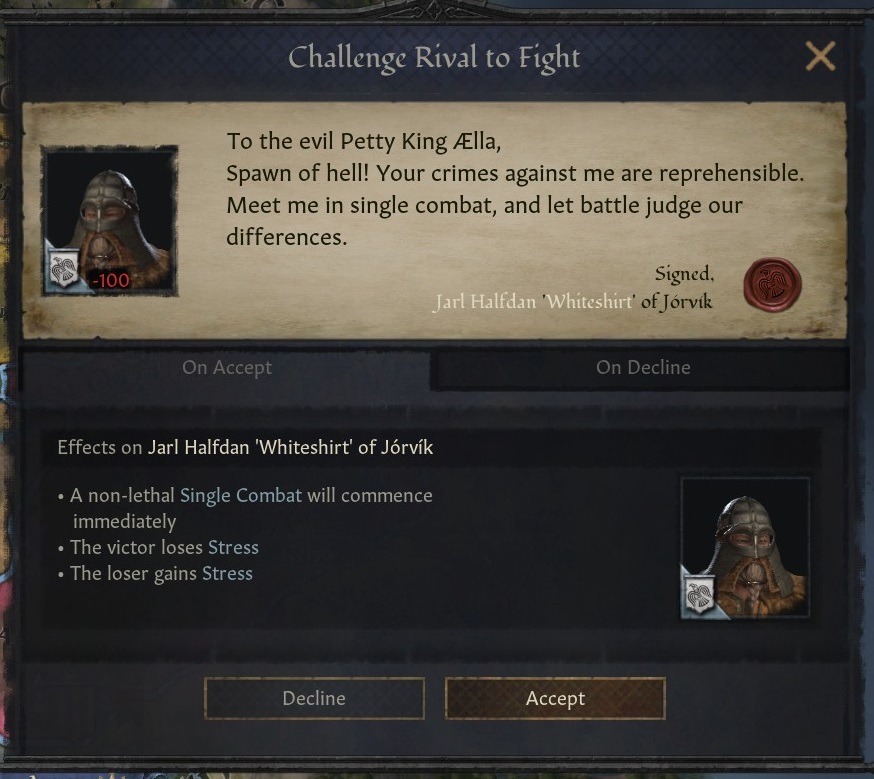 Jarl Halfdan, kept at bay all these years because I’m holding his son hostage, has turned to demanding single combats.  Fortunately Ælla is a back-stabbing coward and has no trouble turning this down, because he completely sucks at it. 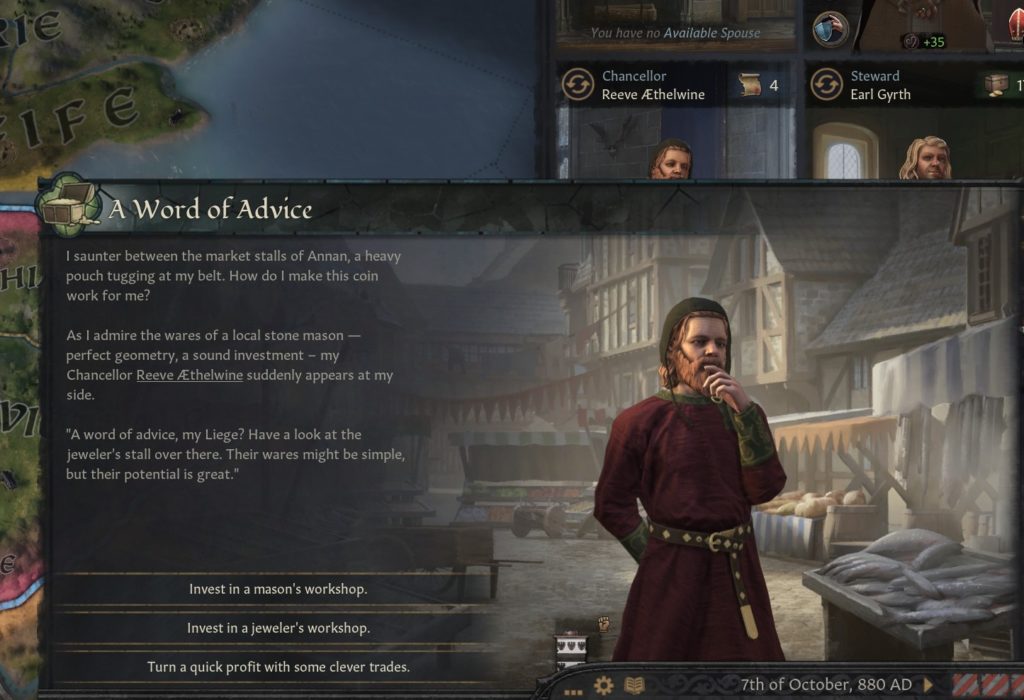 Everyone wants to help me with my stewardship!  Are you sure about this, Reeve Æthelwine?  You are pretty dumb, after all.

Dammit!  Who could have predicted that distributing jobs to incompetents with political power so they’ll like me would have negative consequences?

Since his heir is actually currently in my dungeon, I’m back to trying to murder Jarl Sigfroþ.  Giving him carpet sounds like a good first step.  Mwahahaha!

And my lover/spymaster Eadhburh is running around accusing random priests.

Eh, honestly, she’s the spymaster.  She probably knows best.  And I’m pretty far below water in the piety department as it is.

Ælla abruptly decides that he wants to be a whaler.  Unfortunately this uses Prowess, the same stat as fighting, which he is absolutely crap in.  We’ll let some minions take care of it. 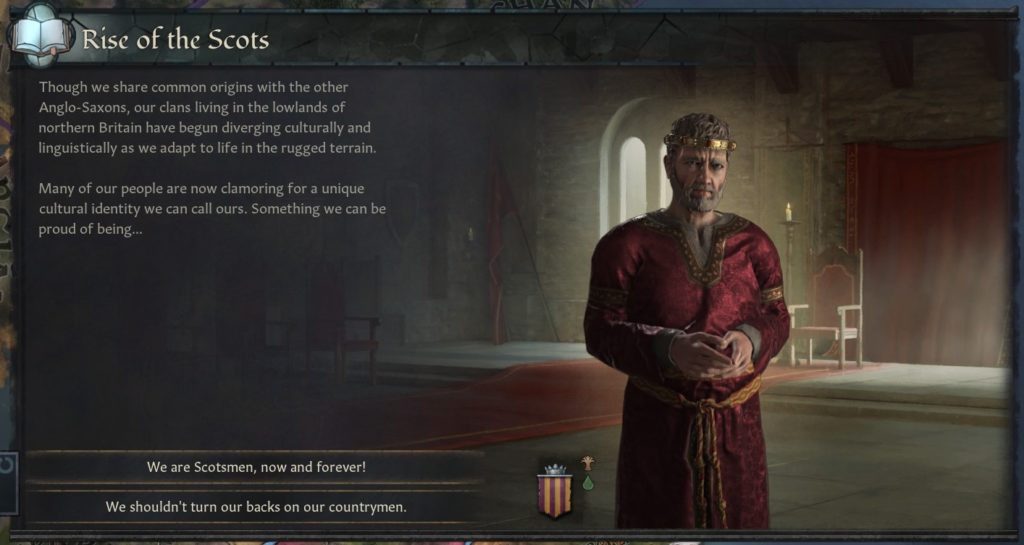 And, finally, I get to become Scottish!  First goal of the game achieved — I’m still alive (barely) and north of the border, so all the Anglo-Saxons in my realm turn into Scots.  I get to take this decision because I’m Culture Head, mostly by default since there’s so few of us left.

My scheme to kill Sigfroþ is making progress, too.  If I can off him, with his heir captive and underage, then maybe I can finally win a war…