(Spoilers for Endgame start somewhere below.)

I have to fight, sometimes, not to become Comic Book Guy.

Note that this is not intended to run down comic book fans of either gender in general, but rather a reference to the Simpsons character who is never given another name. This guy: 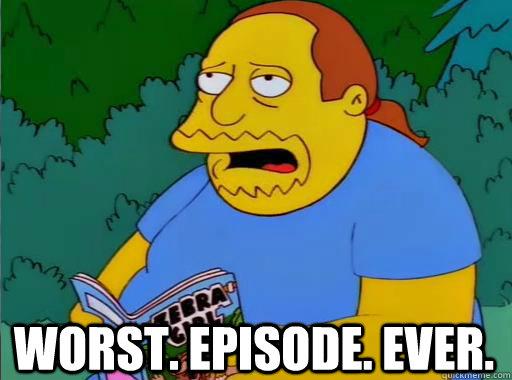 If you’ve never watched the show, he is the archetypal entitled fan who nitpicks minor continuity issues and generally seems to hate all the things he claims to love. I generally don’t go that far, I hope, but I am kind of a nerd for world-building and premise logic, which sometimes leads me down that path.

We talk about “plot holes” in bad movies sometimes, but people often seem to get the causation backward — movie X is full of “plot holes” and therefore it’s bad. This is self-evidently nonsense since plenty of good movies have glaring inconsistencies and logic problems, too. We just notice them more in bad movies, because the badness (which is usually more about character, tone, and other less tangible elements) predisposes us to look for them, and they’re easy to snark about because they’re concrete in a way that an emotionally uninteresting character is not. So The Phantom Menace has tons of logic problems, and I didn’t like it. But The Empire Strikes Back does too (how long was Luke on Dagoba? how does the Falcon get from Hoth to Bespin with no hyperdrive?) and that movie is amazing.

This is a long-winded way of saying that I want to write about some of the little nitpicks in Avengers Endgame, because I am who I am and it amuses me to do so, but that these should be taken as gentle ribbing of a movie that I really, really liked, maybe even loved. It’s really hard to assess Endgame, actually, because there has literally never been anything like it before — the level of ambition and follow-through that made the MCU possible is unprecedented. That the movie exists at all, as the culmination of a ten-year, 22-movie, multi-billion-dollar story arc, is a miracle, and that it’s great on top of all that is almost unbelievable. It’s easy for these things to seem inevitable in hindsight, given the resources available to Disney/Marvel, but look at every other attempt to create a cinematic universe and wonder what might have been.

This is a movie that embraces “fanservice” in the purest sense — not gratuitous T&A or power-fantasy stuff, but doing the wrap-up in a way that lets them put in nods to so many of the plotlines and secondary characters we look back on after a decade. It would have been so easy to make this movie simple; to leave out the time-travel plot and just have the Avengers have to fight some new bad guys or something before finally confronting Thanos. You could even keep the last hour or so just about as-is. But they didn’t do that. For a franchise that’s often described as “safe”, there’s some amazing creative risks in here — this is the capstone of a bid-budget action-adventure superhero franchise that doesn’t start its first action set-piece for almost two hours.

Anyway. There’s some legit criticism of the movie to be made. Black Widow gets the short end of the stick, as always apparently. The all-girl teamup during the battle is a cool moment but feels … dunno, like Marvel taking a victory lap that’s kind of unearned, given the franchise’s somewhat fraught record with female characters? I’m a little weirded out by the prospect of Guardians 3 having Gamora’s memories be reset, although I really really hope it has Lebowski-Thor bumming around. But many people are writing about those, and so having spent a thousand words on throat-clearing and caveats, let me get to what everyone’s really here for — ethical implications of time travel. Right?

After the first movie came out, I wrote a little bit about everyone who dropped the ball and could have thwarted Thanos’ plan. I was curious as to what the deal with Doctor Strange’s plan was — he suddenly offers to give Thanos the Time Stone to save Iron Man, counter to his earlier advice. Presumably, he figured out in his time-mediation that Tony is the key to eventual victory over Thanos, since he a) comes up with the time machine, and b) ultimately does the self-sacrificial snap that destroys Thanos. (Although the Avengers don’t seem to be exactly short on self-sacrifice so b) doesn’t seem that critical?)

However, if Strange doesn’t give the Time Stone to Thanos, then we’re led to believe Thanos never achieves ultimate power. He probably kills Strange and Tony and maybe everyone else but he can’t do the snappy thing. And Strange himself certainly implies that even if he saves Tony getting to the good ending is a pretty unlikely shot. So what this boils down to is that Strange takes an extremely high-risk gamble here with the stakes being the lives of half of everyone in the universe. If he gives Thanos the stone, there’s a small chance that everyone survives (except Tony) but a much larger chance that Thanos just wins. (And, given his speech in Endgame, possibly destroys the universe entirely.) If Strange keeps the stone, then he and Tony definitely die, and maybe some more people on Earth, but the rest of the universe is probably safe. Basically, I feel like Doctor Strange went for the small chance of saving his own skin, risking the safety of untold trillions of sentients. Nice heroing, Cumberbatch!

Apropos of very little, during the final battle, how come none of the heroes thought of … like … using the Infinity Gauntlet? I realize that doing the epic stuff carries the risk of self-immolation (although annihilating Thanos and his army seems kind of on a different scale than half the universe, which is a bit unfair to poor Tony) but that’s not the only thing the stones do, right? Like when Thanos was gathering them they made him nearly invincible, and able to turn things into bubbles and so on. It seems like Emo Hawkeye could have taken advantage of that, or Spider-Man, or anyone really.

While we’re on the subject of annihilating Thanos’ entire army, is this really morally acceptable behavior? Did those guys like … sign up? If you dust Thanos and maybe his four named henchmen, would the rest of them surrender? I know some of them are just horrible monsters, but there’s various armed humanoids in there too. This fits with Marvel’s general moral standard of “human with painted skin = has moral standing, CGI with hidden face = kill without mercy”.

Anyway. TIME TRAVEL! Time travel always causes logic problems so we don’t need to get too into that, the movie actually lampshades it pretty awesomely. They establish very clearly that changing the past has no effect on the future so we’re apparently in some kind of branching-timeline situation. Although they then break that rule since Cap goes back into the past and turns up as an old man, which either implies you can change the future or the future is predestined. But that part was incredibly awesome anyway.

The problem here is that there are many better plans available than the extremely fraught one they end up going with. It’s never clear if there’s a time limit for them staying in the past — they’re very excited that three of the stones are in New York, which implies that there is, since that makes them easy to get, but then it’s never really mentioned. There’s a whole lot of urgency, actually, that’s really sort of bogus, since there’s no ongoing threat at the time they start the time travel. Notably, they could have given Captain Marvel a call, and waited a month or something for her to get back, and then sent her into the past instead of like … Warmachine or Rocket.

Or — and here’s where things really get squirrely — they could have just gone back to get more Pym particles. Send Scott to talk to Hank and his earlier self pre-Thanos, load up with like a truckload of the things, and then you have as many tries as you need. It’d be easy to handwave this with some technical impossibility except that Cap and Tony do exactly that to get home from 1970.

This leads us to the biggest issue, which is really hard to explain away. Black Widow dies, and Tony dies, and everyone’s sad. We have some handwaving about how the Infinity Stones can’t bring them back. (Although — I get that this applies to Nat due to her having sacrificed herself for the Soul Stone, but does it apply to Tony? What about Loki?)

However. You have a time machine. It can bring people from the past to the future, without changing the future — it brings Thanos and his whole starship, including a bunch of people who are dead in the present, including Gamora who was sacrificed for the Soul Stone. It’s hard to see any logical reason why you couldn’t set it to just before you did the first time jump, grab Nat and Tony, and then hey presto they’re alive again! (Arguably you could do this for literally anyone who has ever died tragically.) You could also use the time machine to copy people by repeatedly bringing them from the past, so you could have an army of Hulks or whatever if you wanted. It’s … um, hmm. Let’s hope the knowledge of how to use the thing died with Tony. (Except OH WAIT Cap is using it later…)

Again, apropos of nothing, but is it me or is it kind of unclear how the whole Soul Stone sacrifice thing works? Like, Red Skull tells Thanos that he has to sacrifice what he loves the most, so he kill Gamora. How exactly does Black Widow killing herself count as the same thing for Hawkeye? Or … if Nat is making the sacrifice, does that imply she she herself is what she loves the most? That seems pretty self-evidently false, right?

Whew. Okay. I think I’ve got all that out of my system. Once again, I love this movie, so don’t let my nitpicks count against it. Stories are a hell of a lot more than the sum of their plotholes, and I don’t want to contribute to the idea that movie criticism is playing gotcha with sci-fi logic. If we psychotically over-analyze things, it should be because we love them. =)

One thought on “Avengers Endgame and being Comic Book Guy (Spoilers)”