I have finally gotten the go-ahead to share a few details of The Shadow Campaigns book #3, including its title — The Price of Valor. Soon we may even have a cover to show off! In the meantime, here’s the flap copy. More soon! (Publishing July 2015!)

In the latest Shadow Campaigns novel, Django Wexler continues his “epic fantasy of military might and magical conflict” following The Shadow Throne and The Thousand Names, as the realm of Vordan faces imminent threats from without and within.

In the wake of the King’s death, war has come to Vordan.

The Deputies-General has precarious control of the city, but it is led by a zealot who sees traitors in every shadow. Executions have become a grim public spectacle. The new queen, Raesinia Orboan, finds herself nearly powerless as the government tightens its grip and assassins threaten her life. But she did not help free the country from one sort of tyranny to see it fall into another. Placing her trust with the steadfast soldier Marcus D’Ivoire, she sets out to turn the tide of history.

As the hidden hand of the Sworn Church brings all the powers of the continent to war against Vordan, the enigmatic and brilliant general Janus bet Vhalnich offers a path to victory. Winter Ihernglass, newly promoted to command a regiment, has reunited with her lover and her friends, only to face the prospect of leading them into bloody battle.

And the enemy is not just armed with muskets and cannon. Dark priests of an ancient order, wielding forbidden magic, have infiltrated Vordan to stop Janus by whatever means necessary…

I’ve got a couple of convention appearances coming up, so here’s my schedule if you want to catch up with me. I’ll be bringing my cool new steel bookmarks along to signings, so if you want one come say hi!

(This is still under construction, so stuff may be added as I get details. Here’s what’s solid.)

Wednesday August 13, 6:30 PM: Fantasy-Faction Grim Gathering, Waterstones Kensington
I’m not a guest at this one, but it will be awesome, and I’ll be there. If you want me to sign a book, just come say hello! Check that Facebook link for details.

Thursday August 14, 7:00 – 8:00 PM: “You Got Your SF in My Anime!” (Capital Suite 2 (ExCeL))
“If the cliche image of Western science fiction is spaceships and aliens, the cliches of anime SF might be giant robots and cyberspace — so let’s look a little closer. What’s distinctive about anime’s use of SF, in works such as Ghost in the Shell, Spaceship Yamato, Strike Witches or Planetes? What are the lines of influence between the Japanese and Western SF traditions, and what does each have to offer the other?”
Sarah Ash (Moderator), Juan Sanmiguel, Lars Adler, Django Wexler, Laura Mauro

Friday August 15, 10:00-11:00 AM: “I Like My Secondary World Fantasy a Little on the Techy Side” (Capital Suite 4 (ExCeL))
“Some secondary world fantasies, like Brandon Sanderson’s “Alloy of Law”, Francis Knight’s “Fade to Black”, and Adrian Tchaikovsky’s “Shadows of the Apt”, have ventured into industrialisation. To what extent can the kinds of narratives common in secondary world and epic fantasies find a home in these kinds of settings? Is technological development less “believable” in a world with magic?”
Django Wexler (Moderator), Robert Jackson Bennett, Floris M. Kleijne, Glenda Larke, Adrian Tchaikovsky

Saturday August 16, 1:30-3:00 PM: “Where Have All the Clerics Gone?” (Capital Suite 8+11 (ExCeL))
“Every adventuring party needs a healer! A dedicated person of the gods to keep on hit points. While modern fantasies with their new fangled “magic systems” have replaced the old study oriented wizard, reinterpretations of the cleric are not as obvious. Has the cleric been redefined? If not, why not?”
Django Wexler (Moderator), Scott Lynch, Den Patrick, Danie Ware, P. C. Hodgell

Saturday August 16, 6:00 – 7:00 PM: “Coming of Age in Game of Thrones” (Capital Suite 14 (ExCeL))
“In a world were life and death hang in the balance for every character no matter how despised or loved, it is the children who pay the heaviest price. Their parents’ plots and intrigues sit squarely upon the shoulders of the Stark, Lannister, and Targaryen children, snatching their childhoods away and forcing them to wield their own power to survive the game of thrones. But have the adults underestimated their children’s value as players? Who will survive? Who will gain power? Will they have a chance to be children again? And who will be the biggest surprise? At what point do these children, despite their tender ages, take on the mantels of their parents and become adults themselves? Panelists will examine issues surrounding childhood and coming of age during a time of conflict where familial normalcy is gone and the rules of their world are in the process of being rewritten. *Spoiler Alert: Discussion will include all previously published books within the series.*”
Darlene Marshall (Moderator), Liz de Jager, John Hornor Jacobs, Django Wexler

Probably more to come on the London side! Watch this space.

Today is release day for The Shadow Throne! I’ve got lots of buying options, and an excerpt if you’re on the fence. The Thousand Names is also available in paperback!

Cool stuff from around the web:

Maps for the books on my site.

Interview at The Book Plank

I’ll add more as we go along!

Today is the US release for The Forbidden Library! Check out an excerpt, reviews, art galleries, and more, over at the book page. 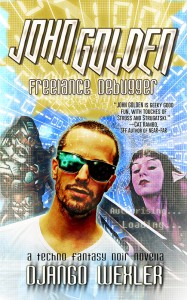 Mogsy at BiblioSanctum says: “I would recommend this to everyone. It’s the perfect urban fantasy for computer geeks, with its IT jokes and references, but it’s also fun for those who are not.”

Other formats/stores are coming, I think. Stay tuned.

The story of how this came to be is a bit convoluted, but here we are! My novella John Golden, Freelance Debugger is coming out from the excellent Ragnarok Publications.

The e-book version will be available February 3rd, with a paperback containing an additional John Golden story coming in August! I’m excited.

If you’re a book reviewer/blogger and would like to take a look, drop me a line.

Here’s the cover and copy: 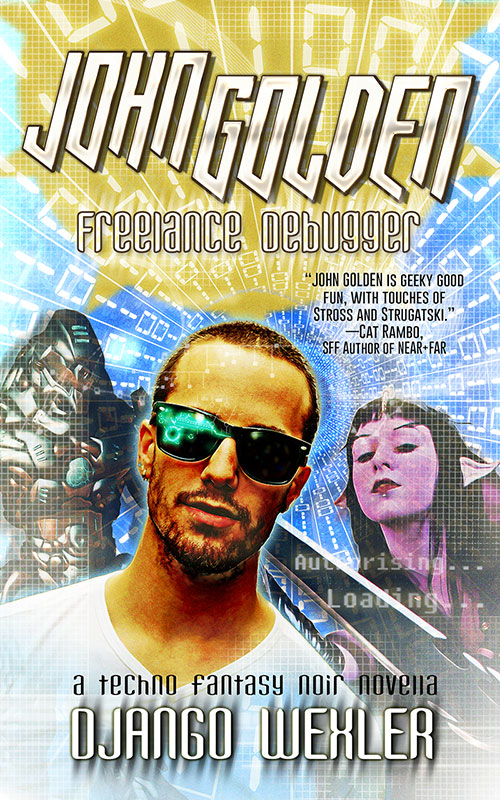 John Golden is a debugger: he goes inside the computer systems of his corporate clients to exterminate the gremlins, sprites, and other fairies that take up residence. But when he gets a frantic call from Serpentine Systems, a top-of-the-line anti-fairy security company, John finds out he’s on much more than a simple smurf-punting expedition.

With the help of his sarcastic little sister Sarah (currently incarnated in the form of a Dell Inspiron) and a paranoid system administrator, John tackles Serpentine’s fairy problem. But the rabbit hole goes deeper than he thinks, and with the security of all of company’s clients in danger, there’s more at stake this time than John’s paycheck!

A great deal of fun was had. I didn’t take many pictures, but you can check out my friend Autumn2May’s photoset. I’m going to revamp the site a bit to prep for the release of The Forbidden Library, but in the meantime you can already preorder at Barnes & Noble or Amazon, or find it on Indiebound. I’ll have more cool stuff to come!

If you’re looking for a signed copy of The Thousand Names, I signed a bunch over at Third Place Books. They’ll happily ship you one! You can put in the comment field that you’re looking for a signed copy. (They’re right near my house, so if they run out I can always go and sign more!) If you want a UK cover, or would like your copy personalized, I can still sell you one directly — send me mail via the contact form. (Shipping will be more expensive, though.)

My short story “The Penitent Damned”, a prequel to The Thousand Names, is now available in a couple of e-book formats. You can get it as .epub for free on GoodReads. (Use the “download ebook” link.) It’s also up on Kindle, although it costs $0.99 because Amazon won’t let me make it free. You can, of course, still read it on io9.

The excellent cover was provided by Nicole Cardiff!

In July I did a lot of guest posts, interviews, and other writing. You’ll be seeing a bit less of me in August — I’m hard at work on edits and rewrites for The Shadow Throne, the sequel to The Thousand Names. Then on to book 3!

Some fun stuff in the not-to-distant future, though. I’ll be at WorldCon at the end of the month, and New York Comic-Con in October. By then we should be getting ready for The Forbidden Library, and I will have some cool stuff to share!