I have returned! Much fun was had. I’m not even going to attempt a wrap-up post since I’m sure to forget things, but I got to hang out with a bunch of awesome people and generally had a great time.

The next con is NYCC, the weekend of October 10th. Before then, I need to finish up this draft of The Shadow Throne, so you may not hear much from me. I’ll put up con schedule details as they come in, though!

This is mostly for my own benefit, so I can figure out how to not overlap things, but it doubles as a way to tell people where I’ll be. Bold is events where I’m speaking/signing/whatever, not just attending. I’ll update as my schedule comes together.

Today I am interviewed for the Reading and Writing Podcast! Man, I sound weird.

Today I saw Elysium. It was not a very good movie, for many reasons. The question that was put to me was which reason, in particular, makes it so awful, so I thought I would make a list. This contains spoilers for the movie, but you shouldn’t watch it anyway.

Okay. I get that this movie is supposed to be allegorical, because you would have to be brain-dead to miss it. The people of Earth are stuck in hellish poverty; all of the ones we see, except for Matt Damon and his asshole supervisor at work, are Latino or black. (Or SE Asian? Not clear.) Meanwhile, on the space station full of rich people, everyone is white, except for the cowardly politician (Indian) and the lab geeks (East Asian). So, we get it. Elysium is the rich developed world, run by and for the white people, and Earth is everyone else on the planet who wants in. Which is fine, I’m all for that kind of message, but the set-up is so stupid it undermines its effectiveness.

The problem is that the movie’s message seems to be that if only the selfish rich people would let everyone in, everything would be fine. This is both stupid in-universe (the space station isn’t that big, how many people can it fit?) and problematic in terms of the metaphor, because it implies that the problem isn’t distribution of wealth but some kind of physical separation, as though we could solve all the world’s problems by … immigration? I’m not sure. I get the analogy in the sense of “rich white people are assholes” but I honestly don’t know what the message is supposed to be beyond that.

The heroic conclusion to the movie is that everyone on Earth is declared citizens of Elysium, at which point the giant spaceships full of medical equipment (that they have for some reason) get sent down by the computers to help everyone on Earth. This brings us around to the economics problems.

The plot revolves around something called a med-bay, a magical device that instantly cures anything wrong with the person put inside it. (Literally anything from cancer to “having your face blown off”.) Leaving aside the astronomical level of technology this implies, the issue is that these devices are apparently super-common. Every house on Elysium has one, and they have giant EMT ships filled with dozens of them. Here, again, the stupidity of the premise undermines the message. The rich people apparently don’t share this magic technology with the world below not because they only have enough for themselves, or because resources are limited, but just out of sheer unmitigated spite. If this had been a smarter movie, there would have been one med-bay, embedded in a giant hospital on Elysium, available only to the rich and super-expensive to run. Then the question of “Is it better to cure these rich people or use the same resources to help millions?” would have some meaning. As written, you can just do both, because magic!

The people on Elysium are living in a post-scarcity society. They don’t go into this in depth, but they essentially have to be, because they have no poor people, only robots to do all the work! Once you’ve gotten to that point, the decision of whether to share the wealth is ridiculously obvious; if you’re trivially capable of providing huge benefits to everyone, but don’t, that makes you some kind of super-villain. But it means the situation has little or no bearing on the actual world problems the movie is trying to talk about, where we’re in the much stickier situation of facing trade-offs. The actual politics of the issue of global inequality are beyond the scope of this document, but they are a lot more complex than “Dr. Doom is just hogging it all.”

(An aside: In the movie District 9, by the same director/writer, the metaphor was similarly obvious but much more effective. By using the aliens as the despised underclass, he shows discrimination as an almost unifying force among the humans. It’s uncomfortable, which is good, because the people doing the discriminating are similar to the audience of the movie. In Elysium, it falls apart because the role of the global rich is played by these cartoons, who the audience doesn’t at all identify with. Again, in a smarter movie, it would not be the rich but ordinary middle-class Americans up there on the space station — they’re the ones who the message is aimed it! It should be more like the ship from Wall-E, where we can see that helping people down below means giving up their comfortable suburban life.) 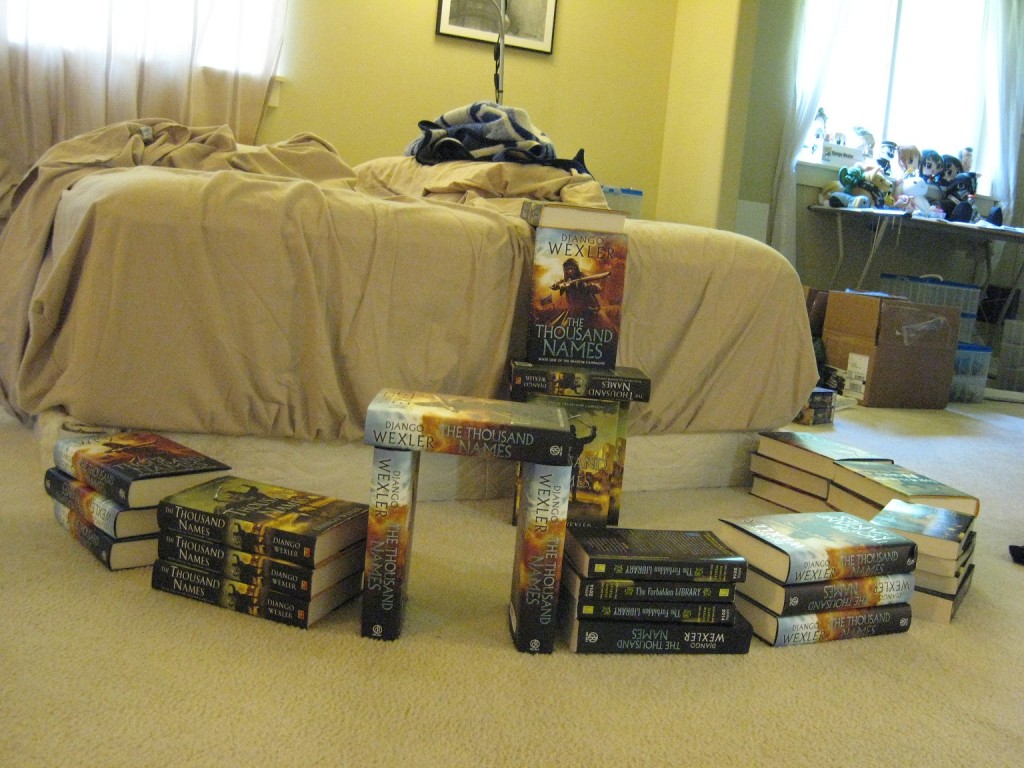 The defenders, anticipating action, deploy to the walls. 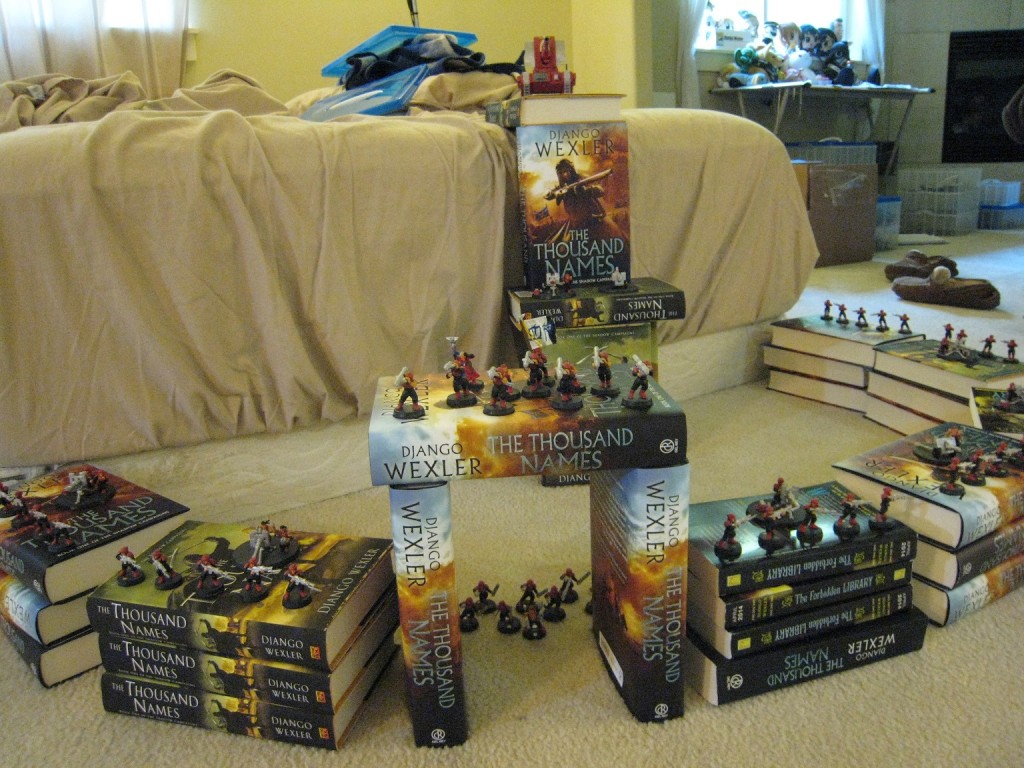 The colonel and his elite troops guard the gate. 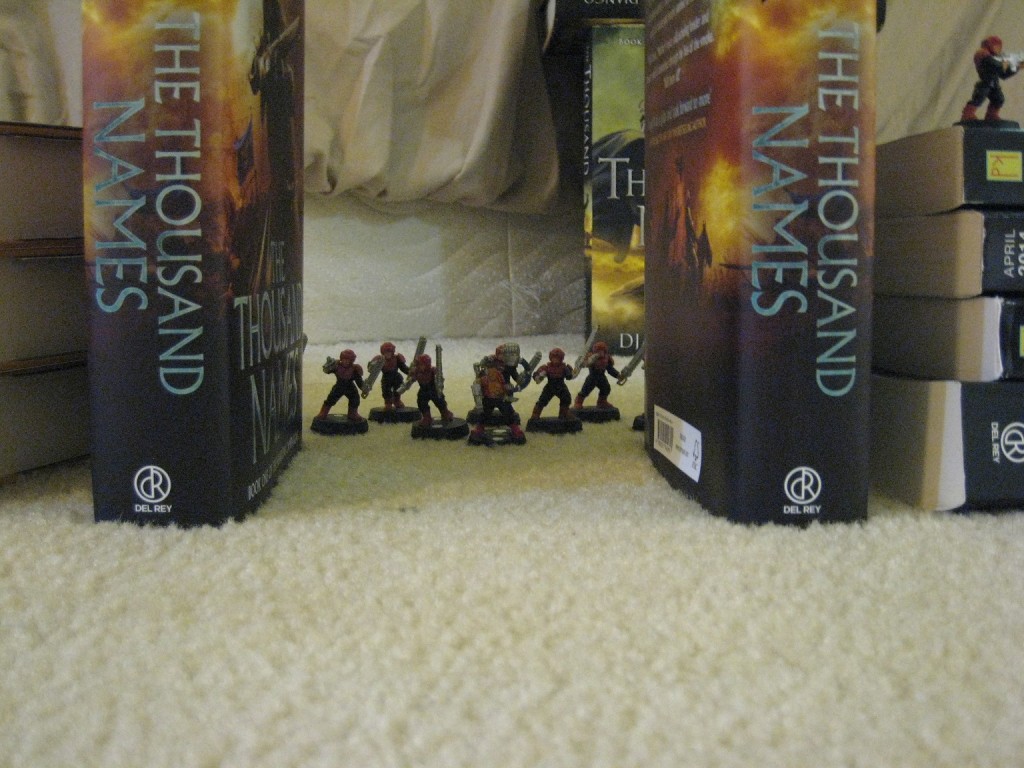 Elevated firing positions are built into the cliff face. 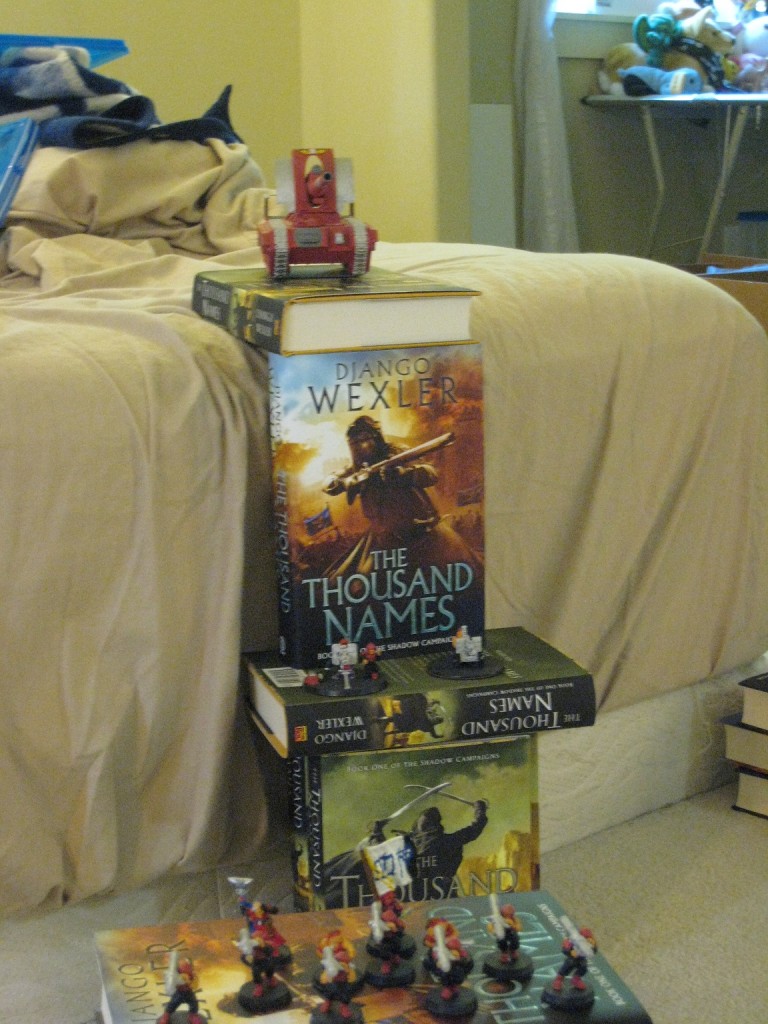 Heavy weapons deploy over the gatehouse. With the enemy confirmed closing in, Command allocates reinforcements. 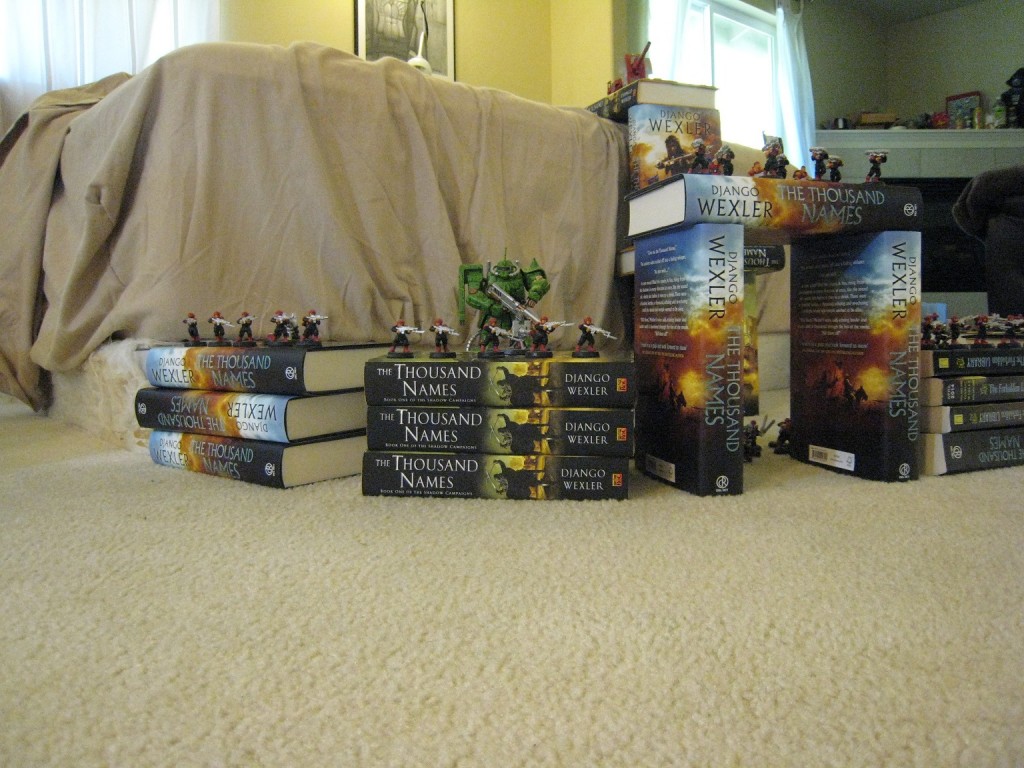 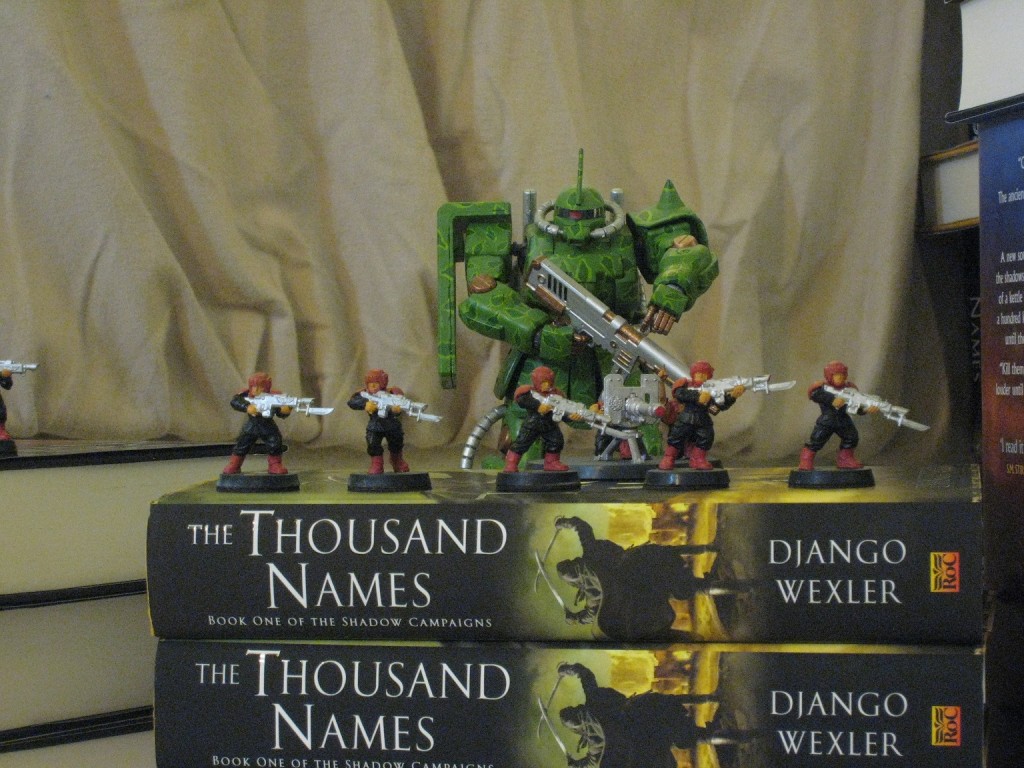 As the savage aliens approach, however, it becomes clear that the prospects for the defenders are bleak. 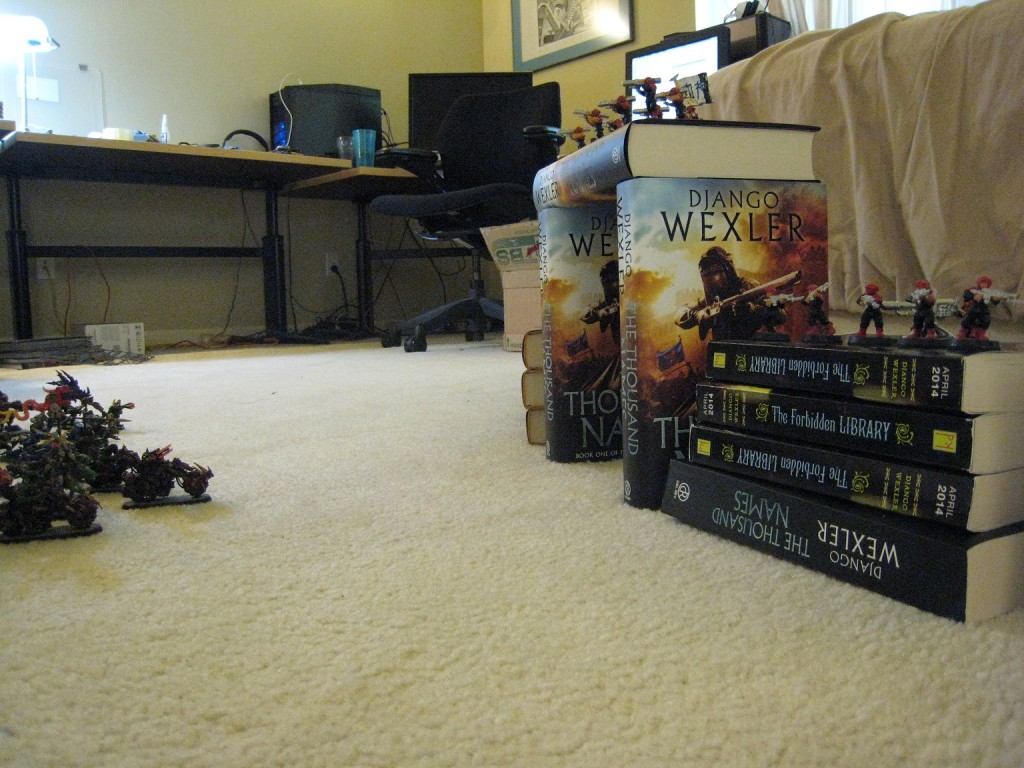 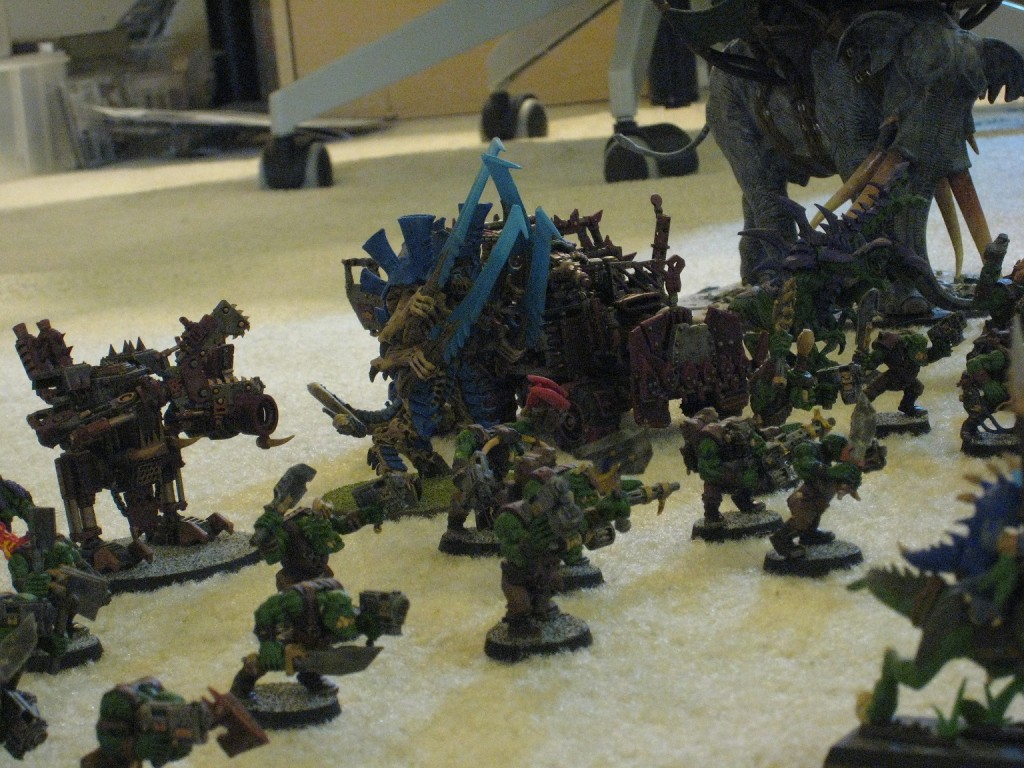 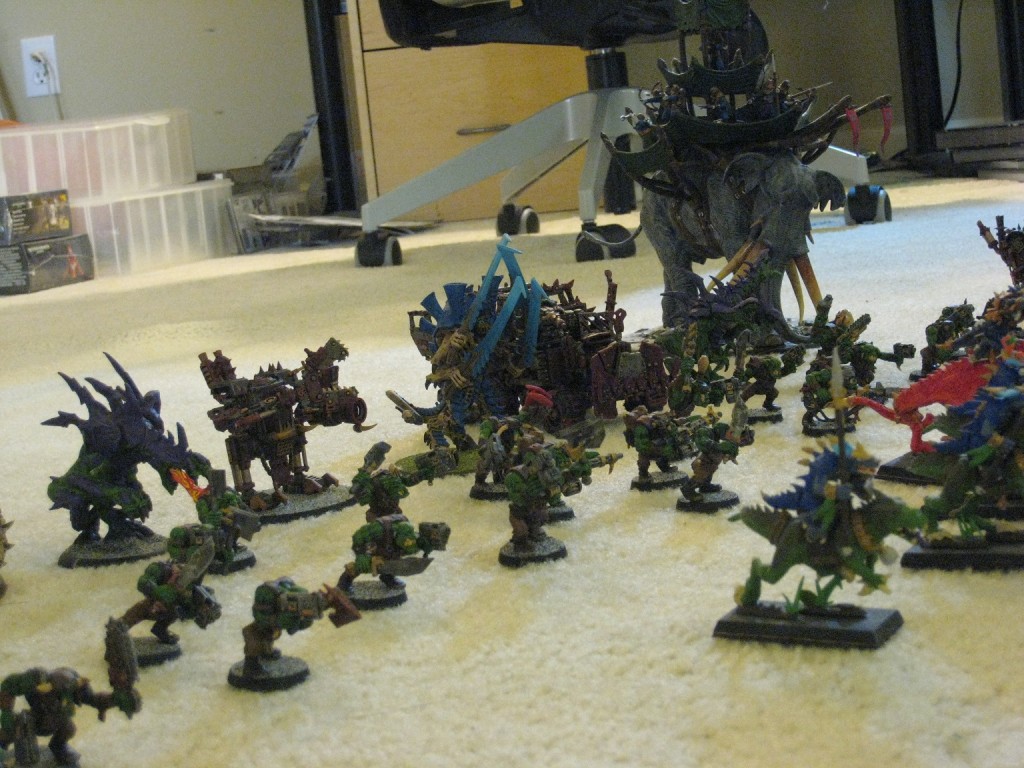 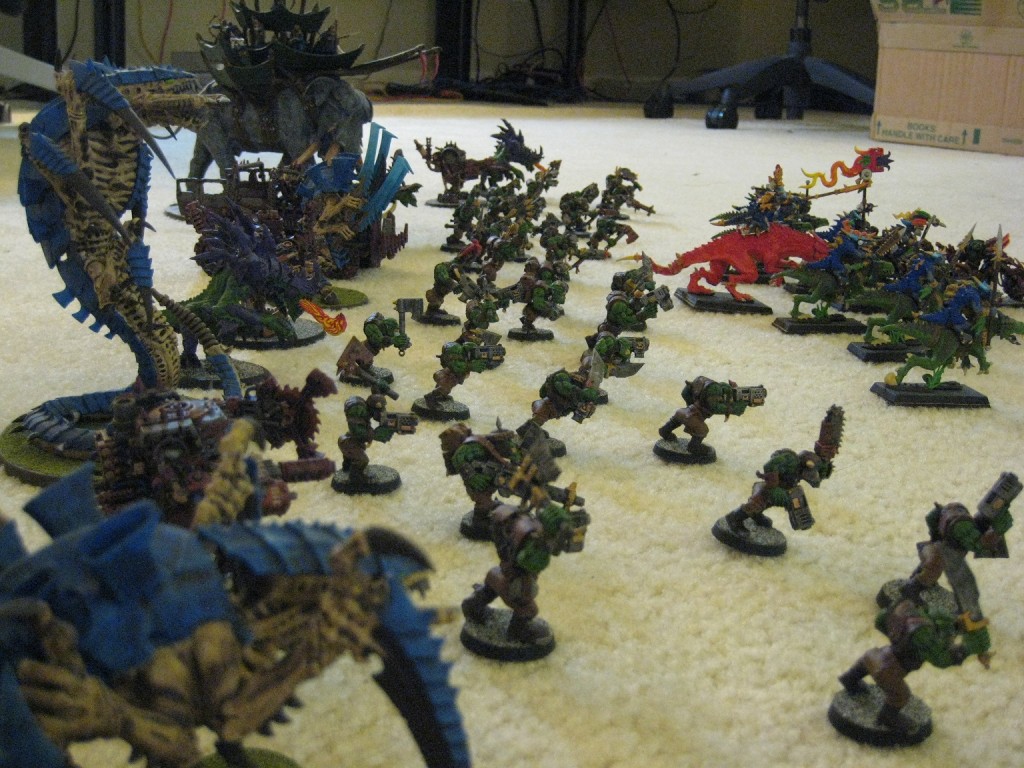 The defenders prepare to sell their lives dearly. 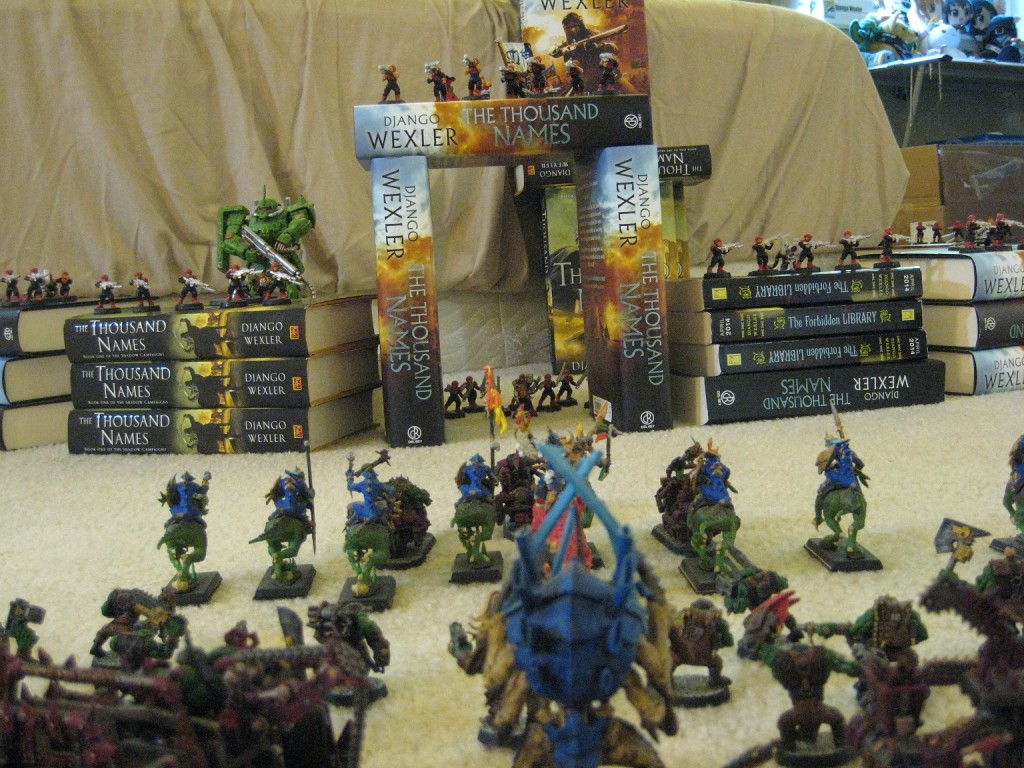 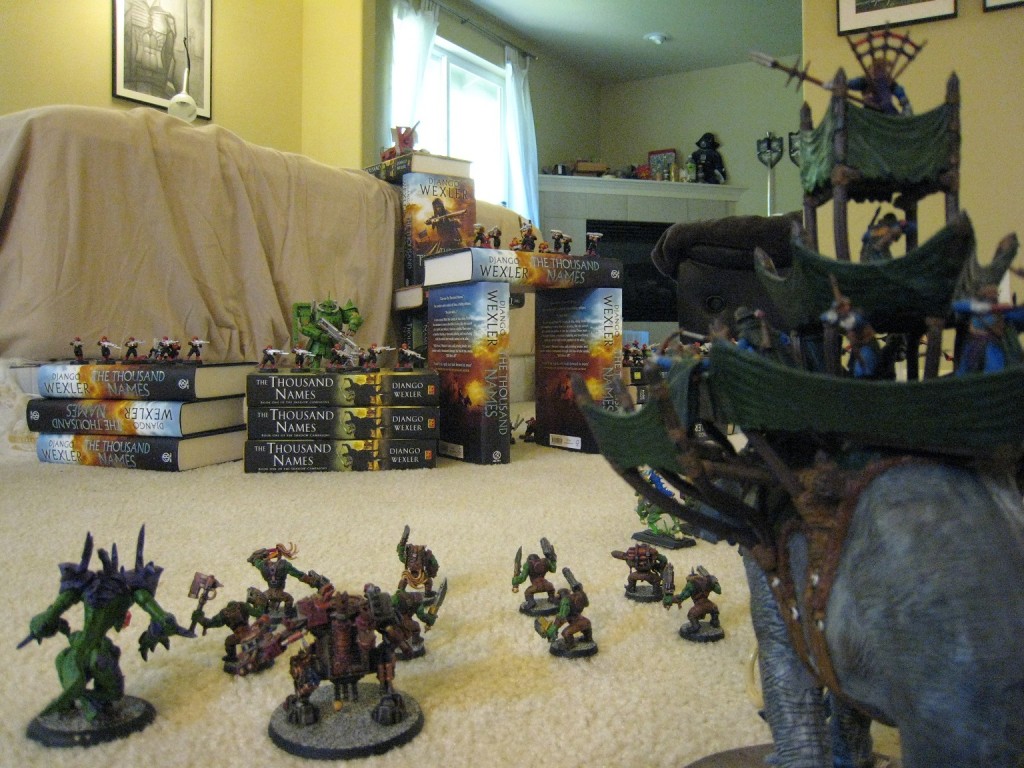 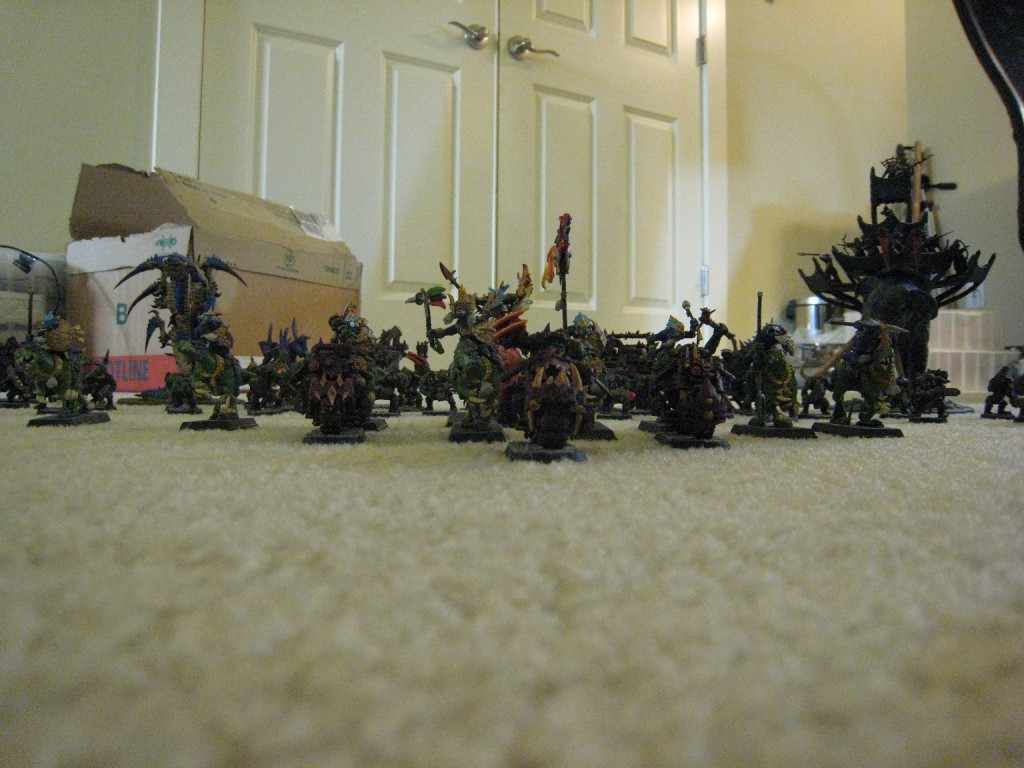 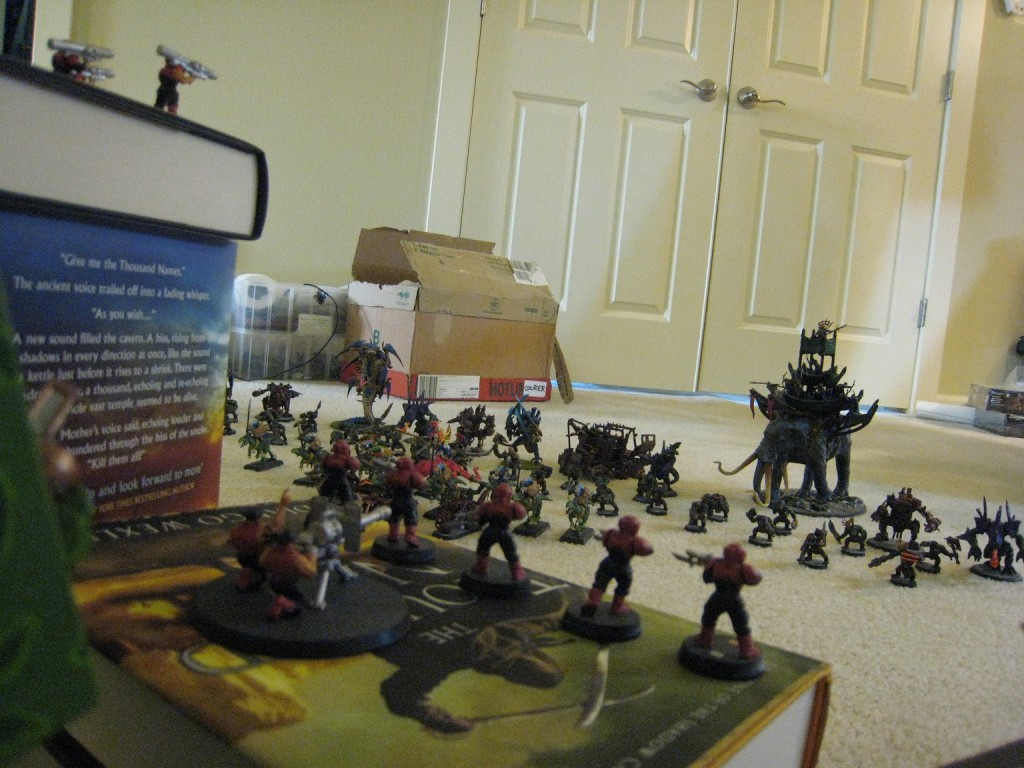 But wait — in the distance… A column of friendly armor, rushing to the relief of the battered defenders! 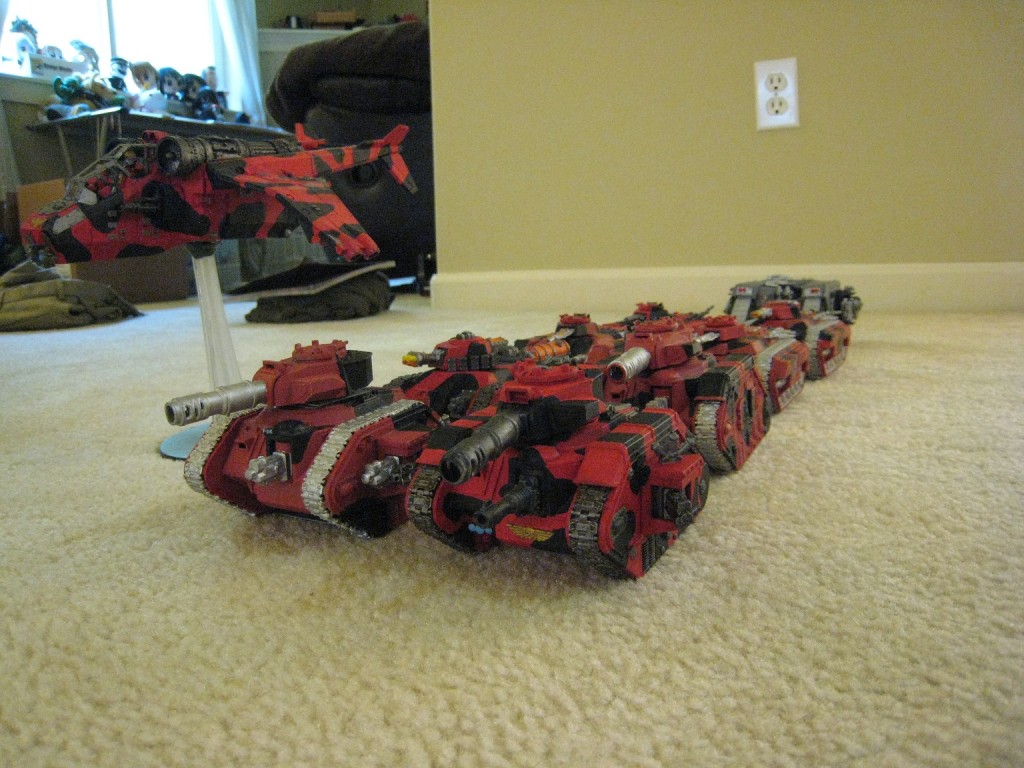 Anyway. The important thing is that everybody gets home without getting stepped on. 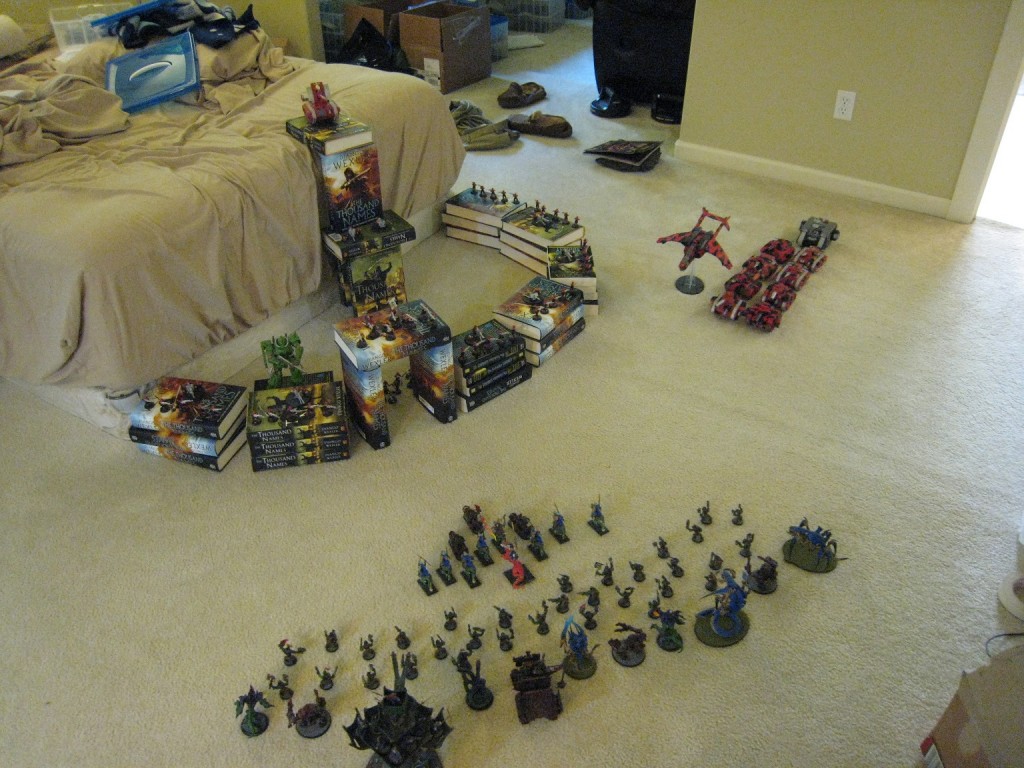 Why yes, I am definitely an adult, why do you ask? (How else could I afford so many toy soldiers?)

Getting back into mini painting. Here’s my pirates (Warmachine Sea Dog Crew) finished long after the campaign they were supposed to take part in is over. Apologies for crappy photography. (If anyone knows a camera that will allow a novice to take good mini photos, I’m in the market for a new camera…) 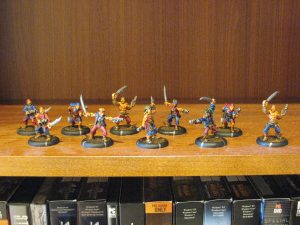 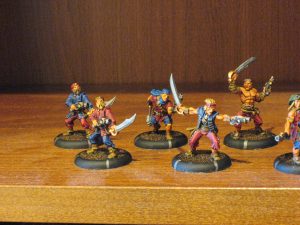 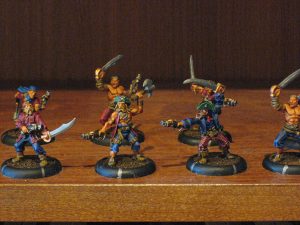 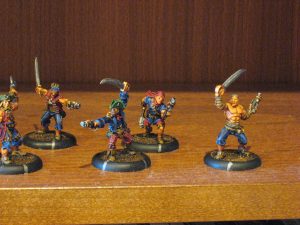 In July I did a lot of guest posts, interviews, and other writing. You’ll be seeing a bit less of me in August — I’m hard at work on edits and rewrites for The Shadow Throne, the sequel to The Thousand Names. Then on to book 3!

Some fun stuff in the not-to-distant future, though. I’ll be at WorldCon at the end of the month, and New York Comic-Con in October. By then we should be getting ready for The Forbidden Library, and I will have some cool stuff to share!

A very nice review of The Thousand Names at Nerds of a Feather.

A great review of The Thousand Names at Fantasy Faction.